The striker has hit the ground running since arriving at Anfield from Southampton and he is confident the Reds can beat Jose Mourinho’s side on Monday night.

Mane told The Telegragh: “We are going to beat Manchester United.

“Of course. We all believe it. We are going to make it.”

He added: “Maybe this will be the biggest game I have played in.

“My games for Senegal will have been the biggest, so far. For my club, I think my biggest was my debut for Southampton against Arsenal. We won and I scored.

“I was under big pressure so for me that was amazing. Now this will be one of the most important. Everyone would like to score in a game like this.”

Mane then defended his £32million move from Southampton during the summer.

People believed Jurgen Klopp paid over the odds to bring the forward from St Mary’s but after starting the season in good form, he is now being branded as the signing of the season.

Mane said: “This is something you have to accept in football. Someone will say you are overpriced, but I did not think about it. 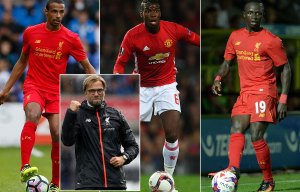 Jurgen Klopp says he doesn’t care how much money Manchester United have spent, this summer.

“Maybe I was overpriced but I believe in my quality and want to get better.

“If you know what you can do for your team, it becomes no problem, and you don’t even think about it.

“You have to deal with it. I think I am getting better. Now, my ambition is to win trophies with my team. We have the quality but it is still too early to say what will happen, this year.”