If everything had gone according to plan, unified WBA/WBO and Ring magazine lightweight titlist Vasyl Lomachenko (12-1, 9 KO) would be seeking his third belt in the division. An injury to newly minted IBF titlist Richard Commey in his title winning effort in February delayed that plan.

Of course, even if we were getting Lomachenko-Commey, that would still leave a certain WBC lightweight titlist out there. Even after losing nearly every round in a welterweight clash to Errol Spence last month, Mikey Garcia remains no worse than the second best lightweight in the world.

The fight, the big one, at 135 lbs. was, is, and will be until one of them loses in the class, Lomachenko-Garcia.

It doesn’t mean we’re ever going to see it given obstacles between Top Rank and PBC.

It’s still the big one for the moment.

This is a not a fight many anticipate seeing Lomachenko struggle with. That says a lot about Lomachenko. Crolla is a solid professional who had a nice underdog run of success going before he ran into Jorge Linares. He shouldn’t be seen as a walk over for anyone in the division.

He may prove not to be for Lomachenko.

It doesn’t matter going in. On paper, this looks like it would be a surprise if it’s close beyond the first few rounds. There are always certain fighters seen as a cut above the level of just ‘solid’.

Lomachenko may not yet be as universally revered as, say, a Roy Jones or Pernell Whitaker was a generation ago but he’s not miles from there with hardcore fans.

That makes an occasion like Friday’s what could be called a fight between.

With most upper shelf talents, the appearance rate of 1-2 times a year can create a level of impatience with the fights between.

It doesn’t mean they aren’t necessary. Even if a fighter wanted to a fight a bad ass every time out, it’s not always easy to do so. 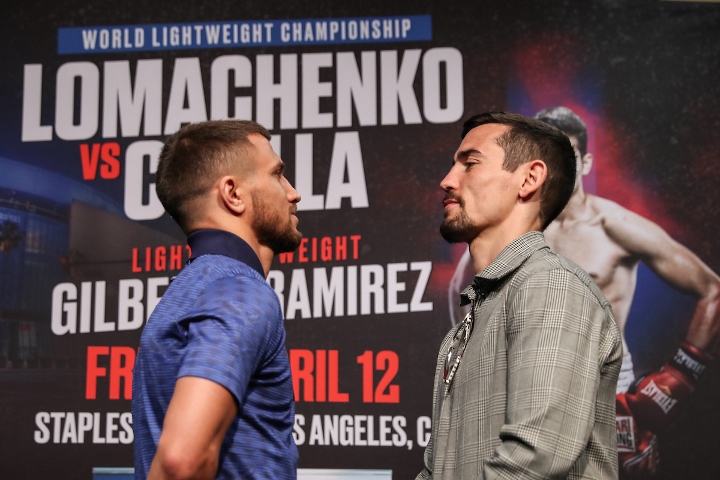 The reality is that most fighters, at the end of their careers, are remembered for only so many of the events they participated in. When the late Muhammad Ali is recalled, and he’s a fighter with a greater range of memorable opponents than most, it’s still Joe Frazier, George Foreman, and Sonny Liston who probably most easily come to mind. Ken Norton, Ron Lyle, Ernie Shavers; indeed, his list is long.

It would still take a real fight aficionado to generate any real memories of clashes with Mac Foster or Blue Lewis.

For Lomachenko, it could be a fight where he is surprisingly challenged and viewers are driven to the edge of their seat by upset fever.

Those are always fun.

The more likely outcome is Lomachenko wins big and decisively in a way that brings the cynics out to remind all that he did what he was supposed to but leaves behind evidence for later generations of what he could do at his best with otherwise world class foes.

There is value in that too.

Last week, in a social media exchange, a Twitter user posted a picture of some boxing greats. One of them Was Salvador Sanchez and the poster noted many young fans wouldn’t recognize the Mexican legend.

A suggestion was made from this corner: show a fan without much knowledge of either a bunch of Wilfredo Gomez fights and then drop the Sanchez fight in at the end. Many a young fan would be inspired to go chase down the rest of Sanchez on their own.

Those fights in between helped to create the value in beating Gomez the same way all the fights between his biggest wins made defeating Zarate so big for Gomez.

If we ever get to Lomachenko-Garcia, their wins over men like Robert Easter, Anthony Crolla, or Jose Pedraza, their fights between, will only serve to further validate how important their fight is because it helps to illuminate just how well cleaned out the decks around them were.

At the least, there are worse ways for Lomachenko to stay busy while waiting for Commey.

The spring calendar is stacked but from this corner that April 26thcard on DAZN headlined by Srisaket Sor Rungvisai-Juan Francisco Estrada II is the best looking show of the year to date … Gilberto Ramirez officially arrives at light heavyweight on the Lomachenko undercard. Top Rank has that division as loaded on their side as PBC has welterweight and Jr. middleweight or DAZN has middleweight. Those are the divisions where fans should most demand to see the best fights because that’s where they can be most easily made … Wrestlemania is still going …