Vasiliy Lomachenko officially has an opponent for an April 12 date he and Top Rank were determined to keep.

Ukraine’s two-time Olympic Gold medalist and three-division titlist in the pro ranks will make the second defence of at least one lightweight title versus England’s Anthony Crolla.

The bout will take place April 12 at the Staples Center in Los Angeles, California, due to stream live on ESPN+. 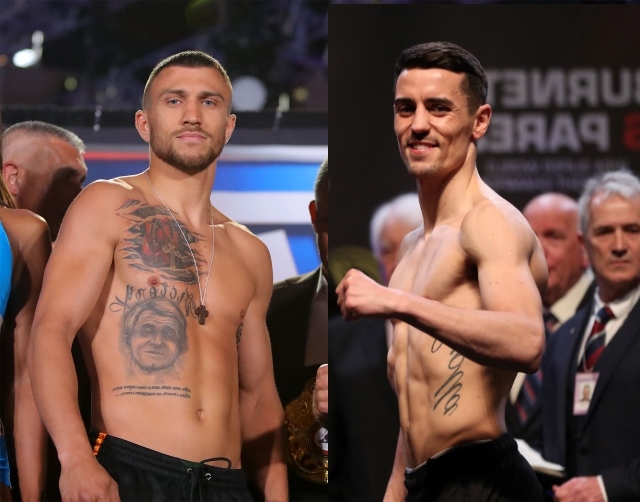 The WBA initially ordered the mandatory title fight in January, with an original deadline set for February 6. Both sides were far enough along in talks – or at least a sufficient contingency plan if it didn’t work out – to convince the sanctioning body to postpone one week, and once again last Wednesday under the same good faith conditions.

Lomachenko (12-1, 9KOs) has been tentatively penciled in for an April 12 ring return almost immediately after his title unification win over Jose Pedraza last December. Original plans called for a three-belt unification battle with Richard Commey, who was forced to bow out after sustaining an injury in a recent 2nd round knockout of Isa Chaniev earlier this month.

By that point, the only real alternative without creating an alphabet mess was  England’s Crolla (34-6-3, 13KOs), a former WBA lightweight beltholder who has resurfaced back into the title picture.

The 32-year old heroic Brit – who valiantly returned to the ring in 2015 after recovering from a major head injury sustained after fending off two burglars – has seen every career title fight and eliminator having taken place in his hometown of Manchester, England, where he has fought in seven of his last eight starts.

However, there wasn’t any home-cooking to be found in a widely disputed 12-round draw in his first fight with Darleys Perez in July ’15. Most observers believed that Crolla deserved the nod and the lightweight title, which he’d eventually obtain courtesy of a 5th round knockout in their rematch later that November.

Just one successful defense came of his reign, a 7th round stoppage of Ismael Barroso in May ’16 before dropping a close but clear decision to Jorge Linares in Sept. ’16. Their March ’17 rematch wasn’t anywhere nearly as competitive, with Crolla suffering a mid-fight knockdown and winning just two rounds on all three scorecards.

Three wins have followed, including a 12-round nod over Daud Yordan in their final eliminator last November.

Lomachenko has seen at least one major title at stake in every fight but his pro debut. His lone career loss came in his second pro fight in March ‘14, dropping a narrow 12-round decision to an overweight Orlando Salido in a bid to capture the vacant featherweight title. He’d do so just three months later, soundly outpointing then-unbeaten Gary Russell Jr.

Three successful defenses followed before a crushing 5th round knockout of Roman Martinez in June ’15 ignited a 130-pound title reign. Lomachenko registered four successful defenses—all by stoppage—before moving up to lightweight last May in looking to become a triple-division titlist.

The feat required his recovering from the first knockdown of his career, as he rose from the canvas to eventually stop Jorge Linares in the 10th round of their their spirited lightweight title tilt last May. His lone defense since then came in a title unification points win over Pedraza last December in New York City, where his last three fights have taken place.

Should all go well versus Crolla, his lone existing mandatory obligation would be cleared which will allow for a return to plans for total lightweight domination.

“Crolla at Staples on April 12… then hopefully Commey in late summer to further unify the (lightweight) titles,” notes Moretti.