A great result for Manchester City, the cynics will say. Ignore them. This was a great result for everybody. Those in blue, those in red, and each and every colour in between. We saw a great football match. Probably the best of the season; probably not to be matched. It was a privilege to be here.

To hand three points to one of these teams, then, and none to the other, would be sacrilege. Actually, to limit them to just the one each seems somewhat stingy. If ever there was a case for splitting three points for a draw here it was.

Short-changing those who cannot be separated is supposed to encourage attacking play, but Chelsea and Liverpool could not possibly have gone at it any harder from start to finish. The last game of the winter holiday period can be anti-climatic. Tired legs, tired minds, talent rested, others injured. Instead, these players treated and entertained us all. If they were still going, we’d still be watching. 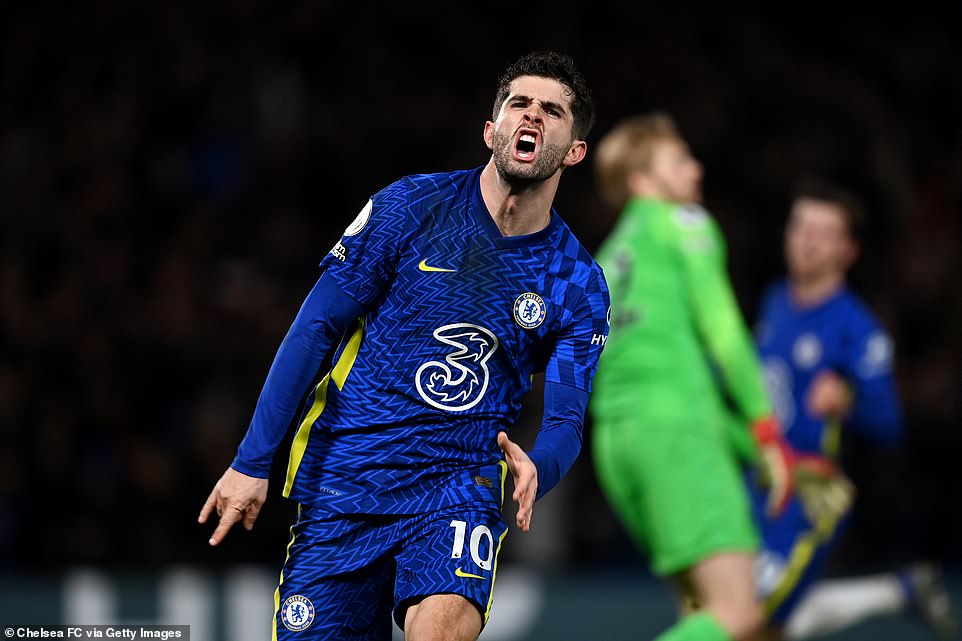 Chelsea manager Thomas Tuchel celebrates the late rally from his side at the end of the first half, which brought them level

To put this into perspective the second half contained three of the saves of the season; two from Edouard Mendy from Mo Salah and Sadio Mane inside the space of two minutes, one from Liverpool’s stand-in Caoimhin Kelleher from Christian Pulisic. Even in the four minutes of injury time the game was still being played with a relentless breathlessness. And this was the lesser of the two mighty halves. This was the half that will be most heavily edited for the television highlights.

So now a few words about the first-half. This was, quite simply, one of the finest 45 minutes of football in Premier League history. Not just the quality of the goals, which was outstanding, but the pace, the emotional power, the ever-present controversy, the willingness to attack and the physical competition. No other league produces matches of such excellence played with such fabulous intensity. There is nothing like elite English football at its best. Mess with it at your peril, Westminster.

Credit the visitors first. No Jurgen Klopp on the touchline for Liverpool, but a Klopp team can be spotted a mile away even when the man is at home on the Lancashire coast. Klopp was here in spirit. His Liverpool came to Stamford Bridge and never took a backward step. They were fast and furious.

Season at a glance:


They were counter-attacking and risk-taking. They were Klopp’s men to a tee. Maybe it helped that instead of his masters’ voice, Liverpool’s players were answering to his assistant Pepijn Lijnders, a slightly unhinged presence who displayed all of Klopp’s lunatic fervour, with a little more of his own for good measure. For those that know their Spinal Tap, his performance truly went to 11.

There were just six minutes gone when Mane found Salah, who forced the first save of the game from Mendy. And just seven had elapsed when Chelsea went up the other end and found Liverpool so open that a Trent Alexander-Arnold clearance ricocheted into the path of Pulisic, left with just Kelleher to beat. Would the absent Romelu Lukaku have done better? We shall never know. Pulisic tried to take it around Liverpool’s understudy but failed miserably, Kelleher seizing the ball at his feet. It was a big miss.

As was proved a mere two minutes later. Diogo Jota played a through ball which Trevoh Chalobah misjudged horribly. He went for the header but the ball dipped low and he ended up taking it ridiculously near to the turf, sending it to the feet of Mane. Here was a lesson for Pulisic in how a born goalscorer takes such opportunities. Mane dragged it wide of Mendy and shot into the empty net.

Now the controversy. Should Mane have even been on the pitch? The first challenge of the game brought him together with Cesar Azpilicueta vying for a ball in the air. Mane took him out with an elbow and the best that can be said was that it was reckless. The worst? That he seemed to check where the Chelsea man was first, giving the appearance of intention. Anthony Taylor, the referee, booked Mane. A bold call after 20 seconds. Bolder still would have been red, but many felt it would have been correct.

It is strange indeed that blows which could inflict fractured cheekbones, broken eye sockets, even brain injuries in the most extreme cases, are treated by referees like any other mundane foul. Pulisic got the same for a late tackle on Jota 16 minutes later. And VAR was no help, either. Shouldn’t Taylor have been told a red card offence had occurred, no matter the time elapsed? Soon after, VAR would check for a possible sending-off when Mason Mount and Konstantinos Tsimikas simply collided. The way the technology is being used is increasingly laughable.

On the sideline, Thomas Tuchel was even more energised than usual, maybe because leaving out Lukaku was such a career-defining call. Certainly tension showed when Marcos Alonso volleyed over spectacularly on the left with Pulisic in a great central position. Tuchel’s reaction made Basil Fawlty appear a model of philosophical restraint.

It didn’t help when seven minutes later, Liverpool widened their lead. Incredibly, there are those who still refuse to believe Salah is the finest player in English football. Yet with every game the evidence grows increasingly unarguable. Here, he picked up a straightforward channel ball from Alexander-Arnold – albeit exquisitely weighted and judged – and turned it into gold.

He messed with Alonso the way a sleight of hand magician bamboozles the stooge from the audience, making the defender believe he was going inside before cutting outside and defeating the excellent Mendy from an ambitiously acute angle. What a miss he will be for Liverpool now international duty calls.

And, two goals down, that looked to be Chelsea done. Yet this was the best 45 minutes of the season so far and it didn’t get that way without a twist. So, in the final minute, James Milner took out Kai Havertz needlessly, at the second attempt. Alsonso whipped in a shot from the free-kick on the right, which Kelleher must have felt he had punched to safety, well outside the penalty area. Onto the ball came Mateo Kovacic – arguably Chelsea’s best central midfielder this season, despite injury – who struck a mighty volley that flew into Kelleher’s top left corner.

Now VAR wanted involvement. Blows to the head, no interest, but great goals it will cancel if it can. In a windowless room far from the action, Darren England started checking whether Antonio Rudiger’s late departure from Liverpool’s penalty area had impeded Kelleher’s view. Maybe, if he was 9ft 6in, given the shot’s trajectory.

It was too much for Tuchel. He raged, he pulled his tracksuit top over his head, he threw a water bottle into an advertising hoarding as if attempting a last ball run out from silly mid-wicket. And guess what? After much unfathomable deliberation, the goal stood. Of course it bloody stood. Anyone who has ever played or watched a single football match knew it wasn’t offside.

Now Chelsea had their tails up, fired by an injustice that hadn’t actually happened. N’Golo Kante won the ball in midfield and fed Pulisic. Here was a chance to make amends, and he did. A beautifully lofted lob-shot defeated Kelleher and brought Chelsea level. They could even have gone in at half-time ahead, had Mason Mount not missed narrowly in the third minute of additional time.

And now breathe. What a game. We can worry about where it leaves City later. For now. to everybody involved: many, many thanks.