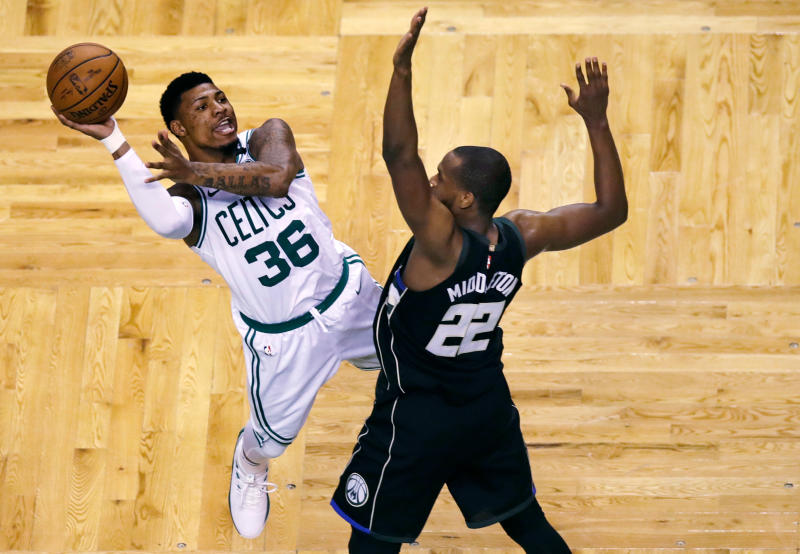 The hand was injured. The heart hurt. Marcus Smart played on Tuesday, some six weeks after surgery to repair a ligament in his right thumb ended his regular season. He played — and he played well, racking up nine points, four assists and five rebounds in the Boston Celtics’ 92-87 Game 5 win over the Milwaukee Bucks. He dove on the floor, blocked shots (three total), whipping 18,624 green-clad fans into a frenzy.

Nearly 2,000 miles away, in a hospital in Dallas, another fan cheered, perhaps louder. Smart’s mother, Camellia, has cancer. Bone marrow cancer, specifically. She revealed her condition to Smart two weeks ago — and immediately urged him to rejoin the team for its playoff run.

Want to make me happy, Camellia told her son. Get back out on the floor.

Smart did, and it’s unlikely Boston takes a 3-2 series lead without him. Smart was originally scheduled to be evaluated by his doctor in New York on Tuesday. He hopped a flight on Monday, accompanied by team trainer Art Horne, and squeezed himself onto the doctor’s schedule. He was cleared, and a day later, with a pad protecting his thumb, Smart was in the lineup.

In the lineup and making an impact. Less than a minute after checking in, Smart hit the floor to chase down a loose ball, sandwiching himself between several Bucks players. Doctors told Smart he wasn’t at risk of suffering a more significant injury — but he could re-injure the thumb again. The fear wasn’t an opponent slapping down on it, but the thumb getting jammed and yanked back … the kind of thing that happens at the bottom of piles.

Did Smart think about the thumb when he careened into a cluster of bigger bodies?

Think Boston missed Smart? The Celtics were hit for at least 104 points in the first four games of the series. On Tuesday, the Bucks scored 87. That’s not all Smart, of course. Boston shuffled its starting lineup, inserting Semi Ojeleye for Aron Baynes, electing to play small with Al Horford in the middle. Against the smaller, more nimble Celtics, Milwaukee’s shooting collapsed, both from the floor (36.8 percent) and beyond the 3-point line (27.3 percent).

Said Jabari Parker: “Honestly, just the scouting report, they just figured it out.”

Smart, though, was in the middle of most of it. He broke up an alley-oop pass to Giannis Antetokounmpo in the first half and rejected an Antetokounmpo layup attempt in the fourth quarter. Khris Middleton scored 23 points in Game 3 and 4, respectively. He scored 23 in Game 5 — but needed 21 shots to do it, his 42.9 percent shooting his lowest of the series, and the first time he has shot under 57 percent in it.

“What I thought he would bring to the game is energy and defensively trying to make plays, and that’s what he did,” Middleton said. “I could do a better job of knowing where he is defensively. I don’t know if he’s going for the steal, to draw the foul; he’s just going to work. He’s going to make a lot of dirty plays. Not dirty physically, but hardworking plays. We have got to do a better job of matching that intensity when he comes onto the court, and when he’s not on the court. He’s a great player, [a] smart player.”

Said Horford: “I think I said it early in the year that he was kind of like the soul of our team. Everything that he brings, his toughness, unselfishness, hard-nose player, and we fed off his energy tonight. I felt like the crowd fed off of it, we fed off of it and it’s just good to have him back. This has been genuinely a nice surprise for our group because I didn’t think he was coming back. I didn’t want to get my hopes up even when I heard it was a possibility. We’re just happy to have him back and he had a huge impact on the game tonight.”

On his mother, too. On his sneakers, Smart penned messages to his mother. “YOU FIGHT, I FIGHT. F-CANCER. MAMA’S BOY.” There was a stoicism to Smart before the game. During warmups, Smart usually banters with Jerome Allen, a Celtics assistant who works him out. Not Tuesday. Smart plugged in his ear buds, the sounds of Meek Mill, the rapper just released from prison, blaring through them, and went to work.

Boston did too, and now the Celtics have pushed the Bucks to the brink of elimination and will travel to Milwaukee with their best perimeter defender with them. When Smart arrived at the practice facility Tuesday morning, he was greeted by loud cheers from his teammates. When he walked off the floor Tuesday night, he was met with high-fives and hugs. As he ended a postgame interview, Smart said he needed to call Camellia, to check in, to let his biggest fan know he was thinking of her.

“It meant everything to be out there,” Smart said. “For her to see me on the court was big for me.”