Floyd Mayweather would never box UFC lightweight champion Conor McGregor as he is ascared fighter, according to former world heavyweight champion Lennox Lewis.Speaking exclusively to Daily Star Sport, the former WBC,IBF andWBO heavyweight champ said: “I just think it’s all hype. I don’t think Floyd is going to do that. I think Floyd is just talking.”I don’t think he’ll do it because he’s ascared fighter. So, he’ll do the same thing he’ll always do – run around the ring.”It’s not going to be that much of a fight.”
Ana Cecilia Cunha
Meanwhile, Nate Diaz is currently in the process of applying for a boxing license in Nevada.During an interview with ESPN’s BrettOkamoto, Nevada State Athletic Commission executive director Bob Bennett said: “Nate paid his fine and has requested a boxing license.”Upon his submission of the required licensing information, we expect to approve his license as of this date.”We welcome Nate and his older brother, Nick, to fight in Las Vegas, whether it’s with the UFC or a boxing promoter.”
And finally, Cody Garbrandt has launched a blistering attack on his former Team Alpha Male training partner, T.J. Dillashaw.”He was never the champion, he held a fake title,” he told TMZ.”I went in there and dethroned Dominick Cruz… I’m the bantamweight champion of the world. 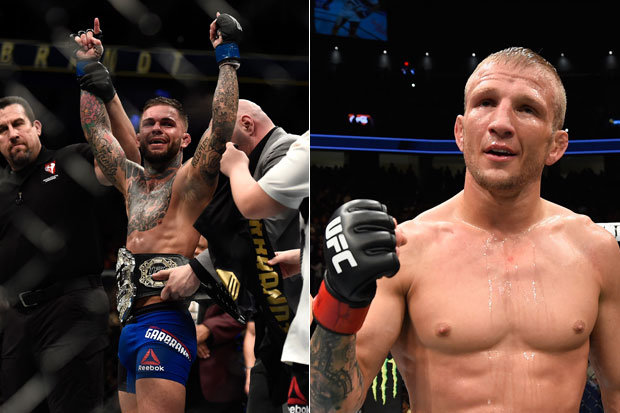 Cody Garbrandt and T.J. Dillashaw
“He was walking around as the as the fake champion as Cruz was hurt.”So, that’s one I’d like to get back for the team as well, there’s a story with that.”SOURCE: dailystar.co.uk