DeGale had been fancied to snatch Jack’s WBC 168lb strap in front of a sold-out crowd at the Barclays Center in Brooklyn, New York.However, he was met by a spirited opponent in Badou Jack who recovered from a slow start to match his British rival virtually punch-for-punch in the thrilling encounter.In the end a draw seemed a fair result, with one judge scoring the bout 114-112 in DeGale’s favour and two scores of 113-113 meaning both men retained their super-middleweight titles.DeGale showed silky footwork and bags of heart – recovering from having his teeth knocked out by a devastating uppercut – impressing legendary 49-0 former world champion Floyd Mayweather.
The Money Man was animated as he sat ringside egging Jack – signed to Mayweather Promotions – on during the pulsating encounter.After the fight, Pretty Boy Floyd even made a cheeky play to try and sign DeGale, whose deal with promoter Eddie Hearn’s Matchroom had come to an end.“We would love to sign him [DeGale],” Floyd told reporters at the post-fight press conference. 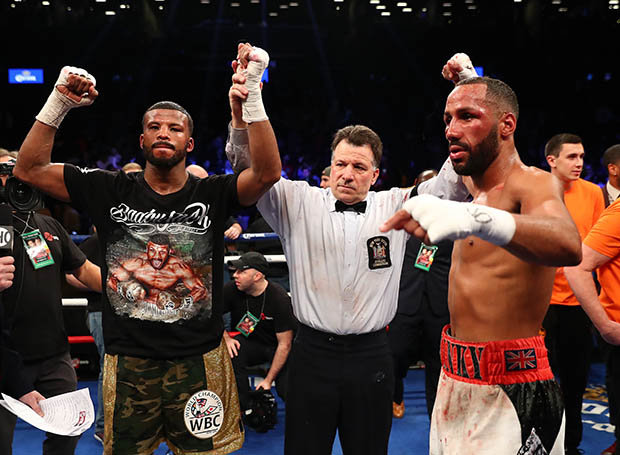 Judges scored the fight a majority draw, meaning both men retained their titles
“We’re ready to take him to the next level and he’s still one of the best fighters out there.“I have a tour coming up over in the UK and I wanna hopefully hang out with JamesDeGale, he’s a cool guy.“He’s one of the younger guys that used to look up to me, he’s a former Olympic gold medallist – we wanna work with you.”Despite the 39-year-old’s gushing advances, Chunky is reportedly close to signing a further three-year-deal with Matchroom.