There’s no sadder sight in the whole of sport than watching a once great fighter failing miserably to recapture his magic.

So many superb champions have sacrificed their legendary status by taking that one fight too many.

Sometimes it was their overwhelming ego that caused them to believe they hadn’t lost their brilliance – though mostly it was because they were desperately in need of money.

Invariably it led to embarrassing as well as painful defeat. And to make matters worse they ended up receiving pity instead of the usual superlatives.

For me there have been three lamentable stand-out occasions that had me inwardly weeping as I watched the decline and fall of men who had tumbled ignominiously from their glorious past.

It was 36 years ago that I sat cringing at the heart-breaking sight of Muhammad Ali suffering as Larry Holmes beat him up before he was forced to retire on his stall to the relief of all of us at that Las Vegas ringside.

Three months later in Birmingham I went through a similar experience watching Ken Buchanan, the former world lightweight champion and one of Britain’s finest ever, floundering to a points loss against journeyman Steve Early.

And I will never forget feeling totally dejected as Sugar Ray Leonard, the greatest I ever saw in the flesh, being battered unmercifully for 12 rounds by Terry Norris, at Madison Square Garden, New York.

It’s those bitter memories that make me sincerely hope Floyd Mayweather Jnr resists the temptation to come out of retirement for a second clash with Manny Pacquiao next year.

Mayweather normally only attends his own promotions but he was an interested spectator, which has fuelled speculation that he’s about to agree a rematch with the Filipino senator.

It took five years to get Mayweather and Pacquiao together when they met 17 months ago in what was by far the richest fight in history.

It grossed an amazing £559m with Mayweather getting £192m and Pacquiao having to be content with a measly £92m.

Though Mayweather has said nothing, promoter Bob Arum is confident there is a 75 per cent chance of it happening again next April or May. 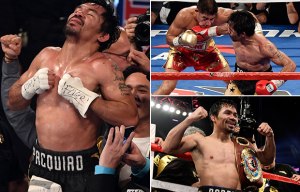 Return of the Pac: Pacquiao out of retirement to claim the WBO welterweight belt in Las Vegas 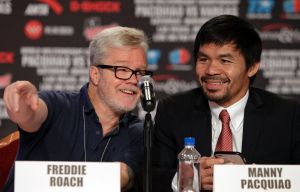 Arum said: “There is no longer any tension or animosity between the two parties and Manny is anxious for it to happen.”

Unfortunately, despite the hysterical build-up, Mayweather and Pacquiao provided a suffocating anti-climax with Floyd winning easily over 12 dreary rounds.

Unlike last time I very much doubt if fans around the world will be particularly excited about the possibility of a rematch.

Mayweather would have been a superstar in any era but even he is only human and Mother Nature has a nasty habit of chastising her offspring if they try to defy her.

Floyd would have passed his 40th birthday and been out of the ring at least 18 months if he should accept a spring date with Pacman.

His speed and reflexes could be seriously flawed. Though I’ve no doubt he would win again, there’s no logical reason why he should put at risk his perfect 49-0 record.

The Money Man can’t possibly be having a cash-flow problem and his legacy is assured for eternity.

My wish is that Floyd has the good sense to refuse the bait however mouth-watering it may be.