Rhys McClenaghan won Northern Ireland’s first medal of the Commonwealth Games with pommel horse gold ahead of England’s Olympic champion Max Whitlock. A stunning routine from McClenaghan saw him relegate Whitlock to silver; their scores matched, but the 18-year-old from Antrim took the title because his routine had a greater execution level.

The Englishman had been hoping to replicate his two gold medals in an hour from Rio, but an error-strewn display had earlier seen him finish sixth in the the floor final as Scotland’s Daniel Purvis took bronze behind champion Marios Georgiou of Cyprus.

Whitlock said: “This will push me a bit more and give me a bit more fire that I need and I’m looking forward to getting back.” McClenaghan added: “This is a new chapter in my career as we build towards the next Olympics. It gives me new found confidence.”

Courtney Tulloch won rings gold ahead of England team-mate Nile Wilson, and Georgia-Mae Fenton took the women’s uneven bars title, on a day when there were 10 gold medals for the Home Nations – and which also saw an engagement for basketball players Jamell Anderson and Georgia Jones after England’s men beat Cameroon.

England basketball players get engaged on court at Commonwealth Games

Scotland’s Duncan Scott won the men’s 100m freestyle for his fourth medal of the Games – and added a fifth with bronze in the men’s 4x200m freestyle relay. The 20-year-old surged to victory in 48.02 seconds to beat a star-studded field, while England’s Siobhan O’Connor was dominant in retaining the women’s 200m individual medley title.

Paralympic medallist Alice Tai finished with silver in the women’s S9 100m freestyle. And Adam Peaty’s bid for 50m breaststroke glory remains on track as he qualified quickest for Monday’s final in a Games record of 26.49. Australia’s relay win rounded off the night as James Guy anchored England to silver ahead of Scotland in third. 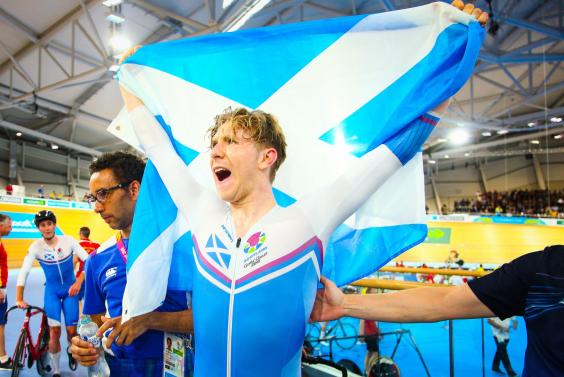 Asha Philip progressed from the women’s 100m heats and semi-finals to Monday’s final, while her England team-mate Adam Gemili advanced to the corresponding men’s final behind favourite Yohan Blake of Jamaica.

Scotland’s first of three gold medals from the day came in bowls, when Ronald Duncan, Derek Oliver and Darren Burnett won the men’s triples ahead of Australia. Wales’ Laura Daniels took silver in the women’s singles.