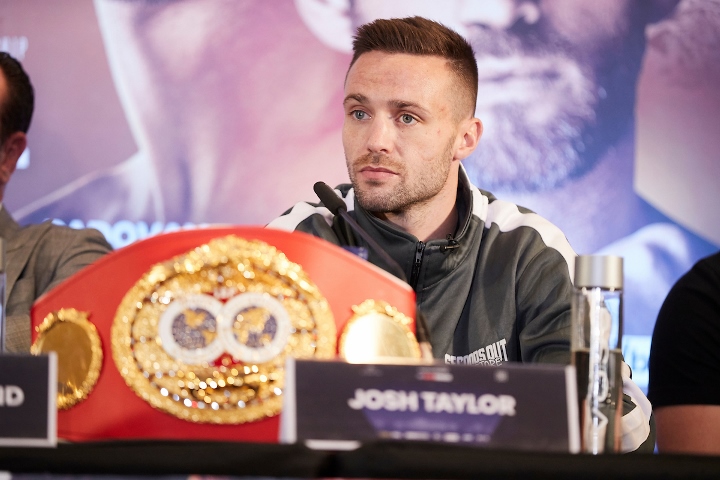 2019 was the career-defining period for Taylor’s career

Trainer Shane McGuigan has explained that his shock when Josh Taylor decided to split from Cyclone Promotions.

McGuigan’s father, Barry McGuigan, a former WBA featherweight titlist, heads up Cyclone, and Taylor had been with the company since turning pro in 2015.

Shane had been the head trainer for the talented fighter but earlier this month, it was officially announced that Taylor had signed a promotional contract with Top Rank.

He won a hard-fought twelve round decision over Regis Prograis to unify the WBA, IBF junior welterweight titles, and with that victory he won the World Boxing Super Series tournament at 140-pounds.

That fight happened in October, Shane was advised of Taylor’s intention to depart in late December.

Cyclone Promotions have claimed that Taylor is still under a valid contract, while the unbeaten fighter claims the agreement was breached and no longer valid.

“I feel a bit begrudged by it all. It was late December and I got a phone call saying Josh was asking to leave. It was a pretty big shock. I didn’t see anything coming,” Shane McGuigan explained during an interview with Boxing Social.

“As soon as I heard that, my heart sank. Mainly because of the effort and time that we had put in to Josh.

“I felt we had managed him and trained him impeccably – 16 fights unbeaten, unified world champion, Ring magazine champion. To find out like that was a blow.

“I’m annoyed that I’ve invested four-and-a-half years of my time and energy in someone who just doesn’t deserve it.”

Shane revealed that there were ongoing discussions to sign Taylor to Eddie Hearn’s Matchroom – which would have seen him featured on DAZN and Sky Sports. Top Rank has an exclusive content deal with ESPN.

“We were in regular talks with JT about a multi-fight deal with Matchroom USA and DAZN and Sky.

“We were constructing something really big for him. Obviously he chose to do his own thing.

“If he’d been a year into his career, fine, no problem. And if he’d have called me and talked to me and everyone and done it the right way, then that would have been fine,” Shane McGuigan said.

“I train fighters that aren’t necessarily managed by my dad. But with Josh, dad had signed him from the start and has done an amazing job with him.

“It’s not right to do it that way. I’m not going to continue to train him when he has done that to somebody so close to me.

“I just feel it’s not fair for that person to be cut out.”