The only disappointment is that the blue-chip Sawgrass scenario arrives a day early. Tommy Fleetwood and Rory McIlroy will take to the third round of the Players Championship tied for the lead at 12 under par in the kind of scene the PGA Tour would be delighted to see rumble into Sunday. Golf needs marquee match-ups such as this.

An inspired back nine of 31 by McIlroy, which included an eagle three at the 16th and a birdie putt from 29ft a hole later, saw him claw back Fleetwood from a seemingly untouchable position. The Northern Irishman’s Friday 65 meant he tied his best 36-hole aggregate to par in a PGA Tour-sanctioned event. On the other three occasions McIlroy has reached minus 12 after two days the prize has been his on Sunday.

Fleetwood had started day two in inspired form. Having birdied the 1st, he holed out from a bunker for an eagle at the par-five 2nd. The Southport man duly collected another shot at the 3rd. Brakes were later applied to an extent but Fleetwood’s birdie at the last sent him homeward in fine spirits. Afterwards he acknowledged the “strange coincidence” of no Englishman having won the Players title. Fleetwood was completing media duties as McIlroy reined him in. 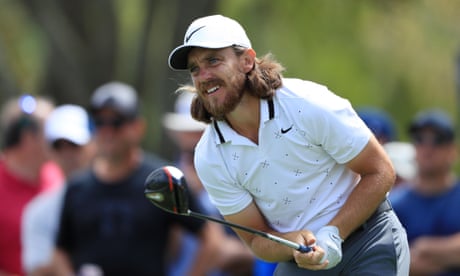 Victory in US for Tommy Fleetwood ‘only a matter of time’, says Rory McIlroy

It is no shock to see Ian Poulter among the key contenders here. A tie for second at the Players of 2017 kick-started Poulter’s career; he has barely looked back since. A 66, marred only by a closing bogey, moved him to minus nine. Poulter has Brian Harman, Abraham Ancer and Jim Furyk for company there; that group is closest to Fleetwood and McIlroy.

Tiger Woods could have well done without his little piece of history. The 14-times major winner had not scored more than a double bogey five at Sawgrass’ iconic 17th before Friday. Two short irons into water triggered a seven; Woods slid from tied eighth to a share of 57th within the space of 10 minutes.

If this scene rather punctured what had become an expectant atmosphere around Woods – he reached the 17th, his eighth, at three under par for his round – his response was as formidable as it was typical. The 43-year-old did not drop another shot before signing for a 71. His three-under-par total means survival for the weekend, comfortably.

“I was pretty ticked, no doubt about that,” Woods admitted of post-17 emotion. “I was bound and determined to get it all back and get it back to five under. I thought that would have been a hell of a fight. I ended up getting back to three, still it was a good fight to get to that point. I just need to go out there and put it together this weekend, because right now literally anybody who makes the cut has got a chance to win this tournament.”

Woods’s first shot into the 17th was perhaps unlucky, with the ball tantalisingly close to hanging on to dry land. His next attempt, from the drop zone, was a woeful effort. Entering this week Woods had played four balls into the 17th pond in career visits, a number duly increased by 50%. This marks his 18th Sawgrass appearance.

“I’m very happy with the way I’ve been grinding around this golf course,” he added. “Other than 17 today, I really haven’t done a whole lot wrong.”

Jason Day, who withdrew from last weekend’s Arnold Palmer Invitational after six holes because of a back problem, continues to show no lasting effects. The Australian’s 66 moved him firmly into contention at eight under.