MICHAEL VAN GERWEN capped one of the finest 12 months in sport by lifting the Sid Waddell Trophy.
The Dutch darts destroyer dethroned Gary Anderson 7-3 in a one-sided final.

Since losing to Raymond van Barneveld in the quarter-finals last year, Van Gerwen has gone on an incredible winning streak — claiming a staggering 26 TOURNAMENTS.

Nobody else across the sporting landscape, certainly no one in darts before, has been as comprehensively dominant as Mighty Mike. And after claiming his second world title with an utterly ruthless performance, Van Gerwen, 27, said:

“This is the most important one. I’ve worked really hard and this means a lot to me.
“Everyone was saying to me I need to win a second one to join the big boys — and this feels phenomenal.”
There was drama late on when someone ran on stage and NICKED the trophy from the plinth while Van Gerwen was throwing for the title — before being escorted away by security men. 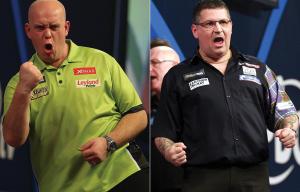 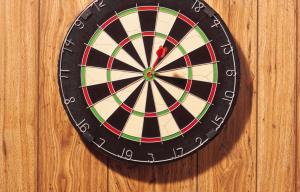 Pupils learning DARTS in school – to help them improve their maths 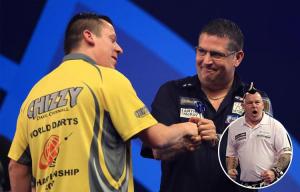 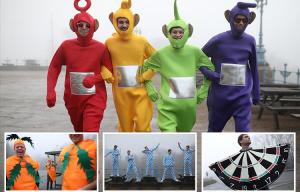 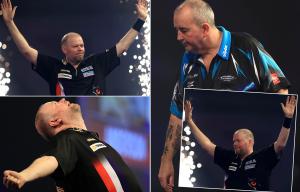 The quality in this year’s tournament has been exceptional with more 180s (708) than ever before — and with a world-record 42 maximums in the final. The best individual performance came on New Year’s Day when Van Gerwen hit an astonishing three-dart average of 114.05 — smashing the 15-year-old world championship record set by Phil Taylor.
The question, of course, was whether the world No 1 would replicate that in the final.
He was clearly up for the battle and proved he was still on top form by taking out 122 in the opening leg of the match.

Yet Anderson (left), the world No 2, always refuses to be bullied and after Van Gerwen missed two darts in the third set, he took advantage to lead 2-1.
However, any hopes Anderson had of claiming a third straight title wilted within half an hour — and four straight sets.

The beginning of the match had been tight and competitive, with the first four sets all going to a fifth and deciding leg.

But Van Gerwen showed his class by bossing the fourth, fifth, sixth, seventh and eighth sets to move 6-2 ahead. During that period, he won 14 out of 16 legs.
He eventually clinched his victory with a bullseye.

A gracious Anderson, 46, admitted: “It’s well deserved. If anyone was going to do it, it was going to be Michael.”
For the Flying Scotsman, who did not have a single ton-plus finish, this was a first defeat in 18 matches on the Ally Pally stage.
For Van Gerwen, a record £350,000 winner’s cheque . . .  and the glory.