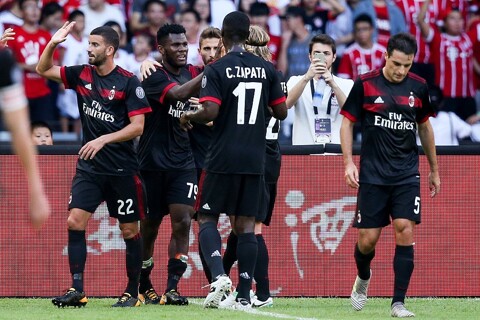 Rossoneri went on fire to beat Bayern Munich 4-0 at their ‘HOME’ ground in China as Kessie opened the scoring before Cutrone scored a double with Calhanoglu on target.

Rossoneri fans were also treated to debuts for Leonardo Bonucci, who came on in the second half for his first appearance since completing a shock transfer from Juventus, as well as fellow star signing Andre Silva.

Milan’s 3-1 loss to Borussia Dortmund led to supporters calling for further reinforcements to the squad during an already hectic transfer window, but Saturday’s clash started in far more encouraging fashion.

Kessie opened the scoring with 14 minutes played, the midfielder reacting quickest to prod in Ricardo Rodriguez’s deflected cross after good interplay between the full-back and M’Baye Niang.

Matters got worse for Bayern before the break as Juan Bernat hobbled off after falling awkwardly, before Robert Lewandowski sent a volley narrowly wide and then failed to connect from point-blank range after a dazzling run from Franck Ribery.

Moments later, Milan made it 3-0 in style. Niang started a counter-attack from his own half, exchanged passes with Cutrone and released Giacomo Bonaventura into the area down the left, the midfielder crossing for Cutrone to tap home his second.

Bayern brought on James Rodriguez and reported Milan target Renato Sanches at the break and began to build some sustained pressure, Thomas Muller stinging the palms of Gianluigi Donnarumma with a strike from 25 yards out.

Bonucci came on to a rapturous reception with just under half an hour to play, but Bayern’s possession led to little more than a chance for Corentin Tolisso that ended up in the side-netting.

The Bundesliga champions were looking resigned to their loss and Calhanoglu took full advantage with five minutes left to play, the Turkey international collecting Gustavo Gomez’s pass, drifting infield from the left and blasting low past Fruchtl before a single Bayern challenge had been attempted.

Ancelotti will be looking for much more when they meet Chelsea in Singapore in three days’ time, while Milan will take renewed confidence into next Thursday’s Europa League qualifying first leg against CS U Craiova.