The one-match ban Pescara midfielder Sulley Muntari received after protesting against racial abuse from Cagliari supporters has been overturned by the Italian football federation (FIGC).

Muntari complained to referee Daniele Minelli about racial abuse during Pescara’s 1-0 defeat Cagliari last weekend,walked off the pitch in protest after being shown a yellow card and was subsequently sent off.

Serie A’s disciplinary committee upheld the referee’s decision on Tuesday, handing the Ghanaian an automatic one-match ban. Cagliari avoided sanctions as “only 10 supporters, and therefore less than 1%” of fans were directly involved, accorded to the committee’s report. 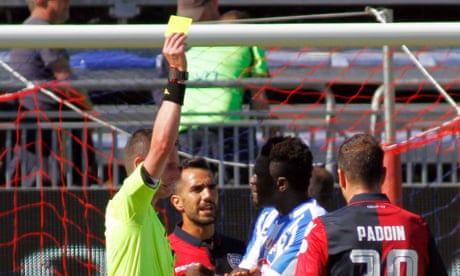 World footballers’ union Fifpro had called for the punishment to be rescinded, while former Tottenham striker and Kick it Out trustee Garth Crooks had called for black players in Italy to go on strike if Muntari was forced to serve the ban – with Muntari’s compatriot, Genoa midfielder Godfred Donsah, saying on Thursday that he was prepared to do so.

Speaking to Italian television after the match, Muntari said he had been abused by a group of fans in the first half but had tried to defuse the situation by giving one of the group, a child, his shirt “to teach him you’re not supposed to do things like that”.

The former Portsmouth, Internazionale and Milan star, who played 84 games for Ghana between 2002 and 2014, said the abuse continued in the second half so he tried to speak to Minelli.

“I told him he should have had the courage to stop the game” Muntari said.

“The referee’s not just there to stand on the pitch and blow his whistle – he has to manage everything. He should also listen out for that kind of thing and set an example.”