My Eyes Will Be On The Winner – Gervonta

Gervonta Davis is training and staying in close proximity to where Vasiliy Lomachenko and Teofimo Lopez will fight, tonight, for supremacy in the lightweight division.

The COVID-19 pandemic prevented Davis from even considering attending the Lomachenko-Lopez event, but the unbeaten Baltimore native will watch their high-stakes showdown closely on ESPN.

Davis is fully focused on his upcoming 12-round, 130-pound title fight against Leo Santa Cruz, yet he is interested in facing the Lomachenko-Lopez winner.

Davis declined to predict who will win their 12-round, 135-pound title unification match during a recent interview with BoxingScene.com, but he acknowledged the magnitude of their high-profile fight.

“I wanna say boxing wins that night,” said Davis, who is training for the Santa Cruz bout at the Las Vegas gym owned by his promoter, Floyd Mayweather.

“We’ve got a young lion versus an older vet. I’ll definitely be watching.

“My eyes will definitely be on it. I can’t really say who will win. Just know I’ll be watching, my eyes will be on the winner, you know, and may the best man win, that night.” 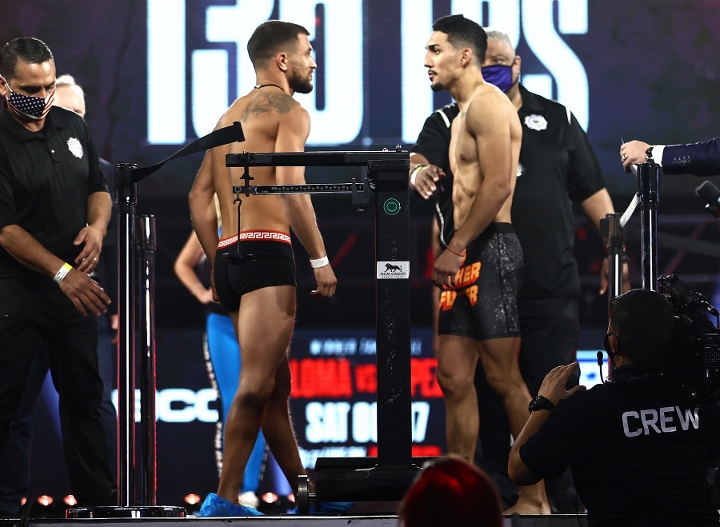 Davis will face Santa Cruz at the junior lightweight limit of 130 pounds, but the former IBF/WBA 130-pound champ is open to moving back up to lightweight for his following fight “if it’s the right business move.”

It is Lomachenko, however, who is considered the WBA’s true lightweight champion, as he owns the WBA’s “super” 135-pound crown.

Lomachenko will defend that title, his WBO belt and the WBC’s franchise championship, tonight, challenged by Lopez, whose IBF crown will be at stake as well.