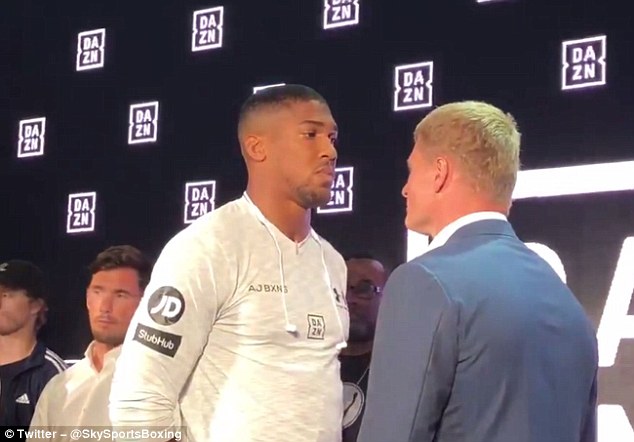 Anthony Joshua and Alexander Povetkin came face to face for the first time ahead of their heavyweight bout at Wembley stadium – but the big talking point became American fighter Jarrell Miller.

Known as the ‘Big Baby’, Miller stormed the stage as Joshua and Povetkin faced off for photographers and the IBF, WBA and WBO heavyweight title holder had to be separated from the American.

Joshua will fight Povetkin, the man who brutally knocked out David Price on the Joshua-Parker undercard in March, in a defence of his belts. 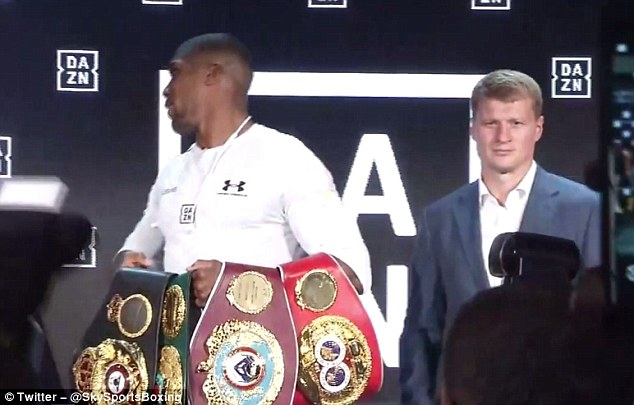 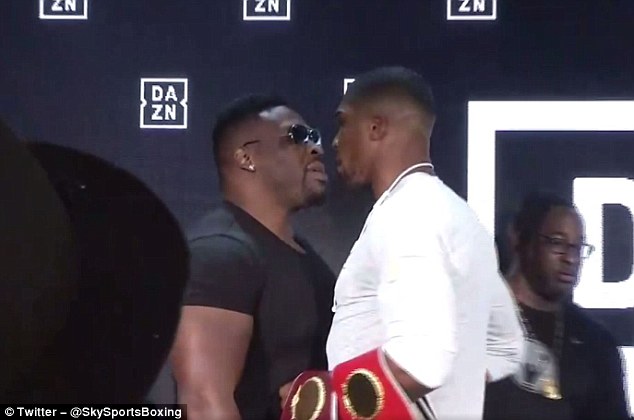 ‘I refuse to give up my belts, Povetkin is a potential banana skin to my ultimate goal. Everyone knows where this fight is leading to,’ Joshua said when quizzed on the Russian.

But Miller had other plans at the press event when he stormed onto the stage before a verbal spar began with his British counterpart.

The event in New York was for the launch of DAZN, the streaming site which will provide Sky Sports with 16 new US fight nights. 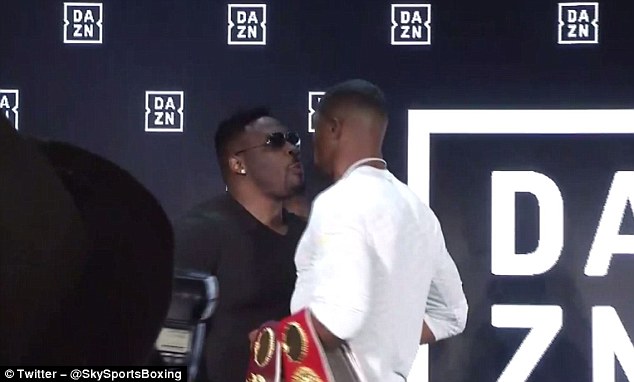 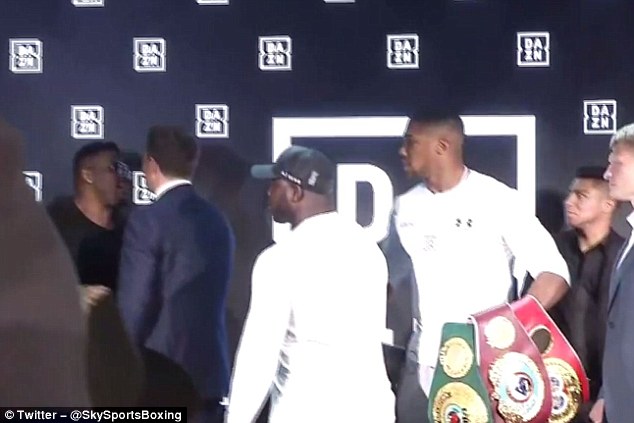 The American, undefeated in his last 22 fights, was quickly ushered from the main stage

WHO IS JARRELL ‘BIG BABY’ MILLER?

Jarrell Miller is an American heavyweight boxer with a record of 22 wins and 0 defeats.

He is nicknamed the ‘Big Baby’ and resides in Brooklyn, New York.

Miller is ranked at No 3 with the IBF and WBA and no doubt has one eye on facing Joshua in the future.

Writing on his Instagram, Miller wrote about Joshua: ‘I know this boy got to much suger (sic) in his tank im going to turn you in to cool aid – You sweet and low English muffin.’

Wearing sunglasses, Miller began shouting some choice words at Joshua before suggesting he should ‘give them what they want’.

Speaking to Sky Sports News, Joshua was adamant he has no time for Miller’s antics and that he only does his talking in the ring.

‘People talk about me, then see me face-to-face, and they still want to talk,’ Joshua said afterwards. ‘I defend my titles in the ring, I’m dedicated, and I just won’t tolerate it outside the ring either. I defend my position. That’s what we do as fighters.

‘Anyone is welcome to come and get the smoke. Firstly I will focus on Povetkin but you never know what the future holds.

‘There is always someone clucking around my feet. I have to kick them back down and keep them humble.’

Joshua is yet to fight outside of the United Kingdom but he would not be short of suitors should he wish to show his talents in the US.

Miller is ranked at No 3 with the IBF and WBA and has gone undefeated in his last 22 fights, which makes him a viable option to be Joshua’s first Stateside opponent.

DAZN have already accrued a number of high-level fighters and along with Miller, Demetrius Andrade, Jessie Vargas, Artur Beterbiev, Maurice Hooker and Daniel Roman were other standout recruits introduced by promoter Eddie Hearn to work with the streaming service.