New Zealand held off a spirited fight from hosts South Africa to complete their Rugby Championship campaign unbeaten after a 25-24 win in a ferocious physical battle in Cape Town.

Each side scored three tries at Newlands in a thrilling spectacle as South Africa restored some pride with a competitive display after being beaten by a record 57-0 in New Zealand last month.

The All Blacks’ tries came from Ryan Crotty, Rieko Ioane and Damian McKenzie, while Ross Cronje, Jean-Luc du Preez and Malcolm Marx scored for the home side.

New Zealand led 8-3 at the break after a bruising first half, but were given a scare as Marx’s 79th-minute try, converted by Elton Jantjies, took the hosts to within a single point. But they held on to finish the southern-hemisphere championship with a 100% success rate for a second successive year. They had already secured the title for a fifth time in six years last week. 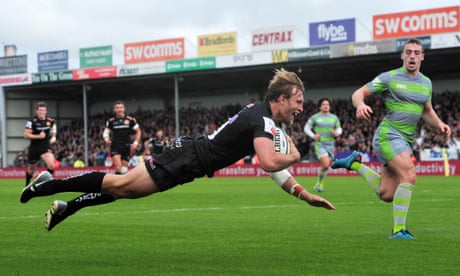 The teams traded early penalties before Crotty scored a first try for the All Blacks, chasing on to a charge down by Beauden Barrett and scrambling beyond the try line to ground it. The points were awarded after lengthy deliberations by the television match official.

The first half extended for eight minutes after the hooter as the teams kept the ball alive, looking for a score in a bruising battle of attrition.

After the break, South Africa piled on the pressure in the scrum and scored within five minutes, as scrum-half Cronje took the ball from the ruck to go over. The conversion by Jantjies put South Africa 10-8 up, but New Zealand could have been quickly back ahead had Lima Sopoaga not missed a kickable penalty from 45 metres out.

With the crowd behind them, the Springboks surged forward to try to extend their lead, only for wing Ioane to pick off an interception and outsprint the defence, running 80 metres for a second New Zealand try.

But within three minutes, South Africa had restored their two-point advantage as hooker Marx took the ball inside the 22 and set up the substitute loose forward Du Preez for the try.

A slice of magic again proved the catalyst for the All Blacks at a decisive moment, as a counterattack by David Havli, on for only his second cap, caught out a disjointed defensive line and resulted in McKenzie jinking his way over.

South Africa lost centre Damian de Allende to a red card in the last five minutes, for a late tackle on Sopoaga as he went wide with a drop-kick effort.

Even down to 14 men, South Africa rallied in the closing stages, and Marx scored with less than two minutes remaining. But a turnover as they pressed forward in search of an upset win allowed the All Blacks to kick out the ball and claim the victory – and a 100% record.