Beating Barca is not impossible – Scolari

On the back of Guangzhou Evergrande’s triumph over Mexico’s Club América in the Club World Cup quarter-finals, Luiz Felipe Scolari, who coaches the Chinese side, declared that “it is not impossible” for his side to overcome Barcelona in the semis. 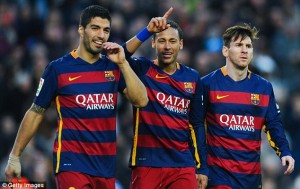 Speaking after his side’s 2-1 win at Osaka’s Nagai Stadium – which was secured courtesy of two goals in the last ten minutes – the ex-Brazil and Portugal coach poured praise on his side’s quarter-final opponents, “they have a super team and it’s a club with great history”, before recognising that his players “fought hard to come back and get the win”.

Big Phil went on to admit that he made some bold decisions during the course of the game, which ultimately paid off, and attentions now turn to the semi-final clash against Luis Enrique’s ‘Azulgranas’.

Scolari harbours real hopes of pulling off a shock against the European champions:

“We want to keep the dream alive in our next game against Barcelona”.