Neymar is set to complete a world-record move to Paris Saint-Germain worth around £450m in fees and wages after telling Barcelona he is leaving.

PSG have given the go‑ahead for the forward’s buyout fee of €222m (£198m) to be handed over at the Spanish football federation offices, the protocol required to clear the transfer. Neymar, who flew to Porto on Wednesday for his medical, is expected to be presented in Paris this week. 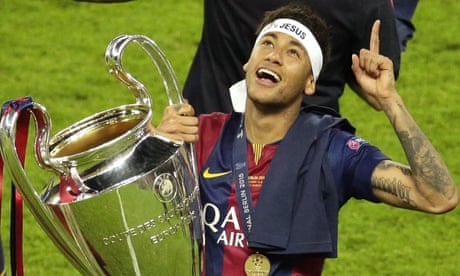 Neymar to PSG: how money and Messi led to the sale of the century

On a dramatic day Neymar, accompanied by his father, who advises him, informed Barcelona at their training ground in the morning of his desire to go. The club responded by saying the release clause would have to be paid in full.

PSG had anticipated that and always intended to meet it. A five-year contract for Neymar has been waiting to be signed for several days. The wages are understood to be around €30m a year after tax – equivalent to around £520,000 a week – almost doubling the player’s salary. Neymar Sr and others including the agent Pini Zahavi are due to share a €38m payment for facilitating the move.

During a training ground visit of around 30 minutes Neymar also told his team-mates he was leaving. They were disappointed to learn of his decision and although it was not unexpected there had been hopes they could convince him to stay. Lionel Messi posted an Instagram video and message to Neymar a few hours later, writing: “It was a great pleasure to have shared all these years with you, friend @neymarjr. I wish you good luck in this new stage of your life.” Neymar had been due to return to training on Wednesday but was given permission by the coach, Ernesto Valverde, not to take part. He headed for Porto, where PSG’s doctor was with Maxwell, the club’s sporting coordinator.

Barcelona’s No1 target to replace Neymar is Philippe Coutinho but Liverpool are adamant he is not for sale. They have rejected a £72m bid and are braced for renewed interest, although Jürgen Klopp made his club’s position clear from the Audi Cup in Munich. “It’s nice that Coutinho is so highly rated but they can save their energy,” the manager said. “I cannot talk about this just because a Barcelona guy starts talking. Did he say they come to Liverpool and do business, something like this? They want to come over? They are funny. I don’t want things like this.” Klopp also had a dig at the amount of money being spent.

He said: “There are clubs that can pay fees like that – Manchester City and PSG. Everybody knows that. I thought financial fair play was introduced so situations like this could not happen but it seems to be more of a suggestion than a real rule. I don’t understand how it happens but I hope this is not the next step. I hope it will stay the exception but you never know.”

Next on Barcelona’s list is likely to be Borussia Dortmund’s Ousmane Dembélé. Kylian Mbappé of Monaco and the Atlético Madrid forward Antoine Griezmann are also coveted but those deals would be harder to secure.

Barcelona’s official position was that Neymar was not for sale but, with PSG willing to meet a clause the club had considered unpayable when inserting it in his contract extension last year, the matter was out of their hands. The fee dwarfs the record €105m Manchester United paid Juventus for Paul Pogba last summer. 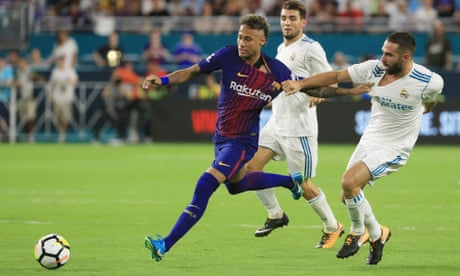 How can PSG pay £200m for Neymar? What happened to financial fair play?

At board level Barcelona are irritated not only at the outcome but by the manner it has been brought about. The political damage is considerable and the club’s image, already deteriorated, has been hit. Barcelona confirmed that a bonus due to Neymar for renewing his contract last season had been put on hold, rather than paid out, pending the resolution of his transfer. That €26m bonus may explain the silence from Neymar’s camp. Neymar’s father has driven the deal.

Barcelona have found support from La Liga, which has indicated it would be reluctant to sign off the move. Legally, however, it appears it has little way of preventing Neymar from triggering his buyout clause as stipulated in its rules and formally becoming a free agent ready to sign for PSG. Fifa and Uefa rules do not contemplate a scenario whereby the Spanish league can prevent a buyout clause being triggered. There has been no suggestion from Barcelona they will complain that he was tapped up.

After a summer of silence, in which neither Neymar nor the club have spoken publicly, and during which Barcelona completed a lucrative tour of the US with Neymar in a starring role, a statement was issued on Wednesday morning.

“Neymar Junior, accompanied by his father and agent, has this morning informed FC Barcelona of his decision to leave the club during a meeting held in the club’s offices,” it said. “Given this position, the club referred them to the buyout clause stipulated in his contract, which since 1 July stands at €222m and must be paid in its entirety.

“In reference to the [player’s camp’s] demand to be paid the renewal bonus [related to last summer’s contract renewal], the club reiterated that the bonus has been deposited with a notary pending the resolution of the case.” 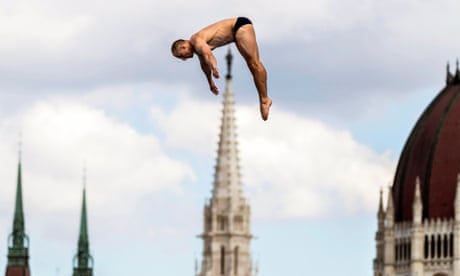 The league’s desire not to sanction the payment stems from a keenness to challenge the financial power of PSG, whose role as competitors to Madrid and Barcelona was long feared and now comes sharply into focus. In an interview with Mundo Deportivo at the weekend the league’s president, Javier Tebas, said: “We will [make a complaint about PSG] because they infringe Uefa’s financial fair play rules and also the European Union’s competition rules. We will make a complaint to Uefa and if they don’t do anything we will take it to the competition tribunals in Switzerland and Brussels. And, from there, we don’t rule out going through the courts in France and Spain.

“Two months ago I met the president of PSG at La Liga’s offices and I told him what we were going to do and the reasons why. He was angry with me and said that he did not understand. We have a relationship [through the Qatari sports channel BeIn] for Spanish football but La Liga must defend our clubs in these situations.”

Uefa has said it has not received a complaint but would look into the details of the transfer if it goes ahead. “PSG must respect financial fair play rules as do all other clubs in Europe,” it has said. “They must demonstrate that they do not have losses of more than €30m over three years.”

PSG, though, have always been aware of the implications of FFP on this transfer and have been working on ways of complying with that and still landing Neymar. They have been in regular contact with Neymar’s father.