Dak Prescott threw a 64-yard touchdown pass to Tavon Austin on the third play of the game, Ezekiel Elliott ran six yards for a TD in the fourth quarter and the Dallas Cowboys sacked Eli Manning six times en route to a 20-13 victory at home over the New York Giants on Sunday night.

Elliott outgained Saquon Barkley in the first meeting in the pros between the former college rival running backs and high NFL draft picks. Elliott, who starred at Ohio State, rushed for 78 yards. Barkley, from Penn State, had just 28. Even Prescott outrushed Barkley, finishing with a career-high 45 yards on the ground. He threw for for 160 yards.

The Cowboys (1-1) avoided the first 0-2 start in seven seasons under coach Jason Garrett. The Giants are 0-2 for the fifth time in the past six seasons.

Daniel Carlson missed two field goals in overtime, including one from 35 yards as time expired, and the Vikings had to settle for a 29-all tie after rallying from a late 13-point deficit.

The rookie pushed his final kick wide right, just like his attempt from 49 earlier in overtime.

Packers kicker Mason Crosby matched a career high with five field goals, but his potential game winner from 52 went wide left as time expired in regulation. Both teams are 1-0-1.

Green Bay star Aaron Rodgers played with a brace on his injured left knee and threw for 281 yards and a score.

Minnesota’s Kirk Cousins threw for 425 yards and four touchdowns, including three in the fourth quarter.

At New Orleans, Wil Lutz kicked a 44-yard field goal for New Orleans with 21 seconds left, Cleveland kicker Zane Gonzalez pushed the second of his two missed field goals wide right in the final seconds, and the Saints held on for a 21-18 victory that extended the Browns’ winless streak to 19 games.

Cleveland (0-1-1) carried a two-score lead into the final nine minutes before its latest collapse.

Receiver Michael Thomas had two fourth-quarter touchdowns for the Saints (1-1), who scored 40 points in a Week 1 loss to Tampa Bay but didn’t find the end zone against Cleveland until 8:41 remained.

At Pittsburgh, Patrick Mahomes tied a franchise record with six touchdown passes. The 22-year-old Mahomes finished 23 of 28 for 326 yards in his third career start as the Chiefs (2-0) won in Pittsburgh for the first time since 1986. Mahomes has 10 touchdown passes through two weeks, the most ever by a quarterback through two games.

Pittsburgh’s Ben Roethlisberger completed 39 of 60 passes for 452 yards and three touchdowns. The 36-year-old also leapt into the end zone for a 3-yard score with 1:59 to go that got the Steelers (0-1-1) within five.

At Tampa, Florida, Ryan Fitzpatrick threw for more than 400 yards and four touchdowns for the second straight week.

Filling in for suspended quarterback Jameis Winston, the 35-year-old Fitzpatrick completed 27 of 32 passes for 402 yards and has the suddenly explosive Bucs off to a 2-0 start for the first time since 2010.

Nick Foles threw for 338 yards for the Eagles (1-1), who rallied from a 20-point, third-quarter deficit.

At Jacksonville, Florida, Blake Bortles threw four touchdown passes, three in the first half, and the Jaguars (2-0) beat Tom Brady and the Patriots in a rematch of last season’s AFC championship game.

Bortles connected with Donte Moncrief, Keelan Cole and Austin Seferian-Jenkins for scores in the first 30 minutes, the second time he’s done that in his NFL career. Bortles completed 29 of 45 passes for 377 yards, with the four TDs and an interception. It was the best game of his five-year career.

The Patriots (1-1) trailed, 24-3, in the third quarter before finally showing signs of life.

At Denver, Brandon McManus kicked a 36-yard field goal just inside the right upright with 6 seconds left, denying Jon Gruden his first win as a head coach since 2008.

With no timeouts and 18 seconds left, Case Keenum hit Tim Patrick for a 26-yard gain to the Oakland 18. Cornerbacks Gareon Conley and Leon Hall couldn’t tackle him inbounds and McManus came on to give the Broncos (2-0) their first lead.

The Raiders (0-2) lost despite a stellar outing by Derek Carr, who completed 29 of 32 passes for 288 yards and a score four days after Gruden called him out for passing up throws to Amari Cooper in Oakland’s opener.

At Los Angeles, Todd Gurley ran for three touchdowns, and Jared Goff threw for 354 yards and a touchdown.

The Rams have won their first two games for the first time since 2001, when they started 6-0 en route to the third Super Bowl appearance in team history.

Gurley finished with 42 yards on 19 carries as he played only three quarters due to cramps.

Garoppolo nearly made a costly mistake when he threw a late interception to Tracy Walker that was returned to the San Francisco 7. But Quandre Diggs was called for a defensive holding away from the play to give the 49ers (1-1) a first down. 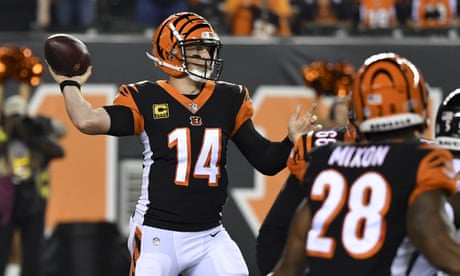 Matt Ryan ran for a pair of scores for the first time in his career and threw a pair of TD passes.

After scoring on a 1-yard sneak that pushed Atlanta (1-1) to a 24-10 lead early in the third quarter, Ryan delivered the biggest blow with a brilliant scamper midway through the fourth quarter. On third-and-5 from the Carolina 8, he looked around futilely for an open receiver, spotted a running lane to the left and took off for the end zone.

There were three Carolina players waiting for him at the goal line – including 346-pound former teammate Dontari Poe – but Ryan leaped and bowled them all over for the TD that gave Atlanta a two-touchdown lead over the Panthers (1-1). Ryan finished 23 of 28 passing for 272 yards.

TJ McDonald and Xavien Howard each intercepted the Jets’ rookie quarterback, helping the Dolphins to their first 2-0 start since 2013.

Tannehill finished 17 of 23 for 168 yards and also ran for 44 yards on eight carries for the Dolphins, coming off a win in the longest NFL game since 1970 merger by outlasting Tennessee in seven hours, eight minutes on 9 September.

Gordon scored on a 20-yard run and added two touchdowns receiving before limping off the field after appearing to hurt his left leg early in the fourth quarter.

Philip Rivers finished 23 of 27 for 256 yards and three touchdowns as the Chargers (1-1) rebounded from a 38-28 loss to Kansas City. The Bills (0-2) also have a concern at running back after LeSean McCoy missed the entire fourth quarter with a rib injury.

At Nashville, Tennessee, Ryan Succop kicked a 31-yard field goal with 1:00 left, and the battered Titans held off the Texans to give Mike Vrabel his first victory as an NFL head coach.

Succop also kicked a tying 42-yarder in the fourth quarter as Tennessee (1-1) pulled out the win with quarterback Marcus Mariota watching from the sideline. The Titans also were missing their top three offensive tackles.

Deshaun Watson and Houston (0-2) had the ball last. With 17 seconds left, Watson ran around the field looking for a receiver. He found DeAndre Hopkins for a 31-yard completion to the Tennessee 21, but time expired before the Texans could run another play.

Luck also found Eric Ebron for a touchdown on the game’s opening drive. The balanced attack with 27 rushing and 31 passing attempts kept Washington’s defense off-balance and allowed Luck to pick apart a secondary that struggled in coverage and tackling.