New England Patriots owner Robert Kraft has pleaded not guilty to two counts of misdemeanor solicitation of prostitution in a Florida case, according to court documents released on Thursday. Kraft’s attorney Jack Goldberger filed the written plea with the Palm Beach County court on Wednesday. Kraft, 77, is requesting a non-jury trial.

Kraft was among hundreds of men charged in a crackdown on massage parlor prostitution and an investigation into human trafficking at Floridaspas. Ten spas have been closed and several people, mostly women originally from China, have been charged with running the operation. 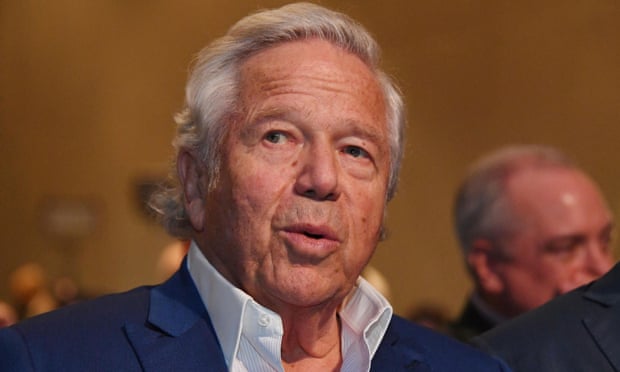 Florida police say in court documents that Kraft was chauffeured to the Orchids of Asia Day Spa on the evening of 19 January, where investigators say they videotaped him engaging in a sex act and then handing over an undetermined amount of cash. Kraft returned to the spa 17 hours later, again in a chauffeured car, the documents said. Kraft, who is worth $6bn, was videotaped engaging in sex acts before paying with a $100 bill and another bill, police said. He then flew to Kansas City to watch the Patriots defeat the Chiefs in the AFC title game hours later. Kraft’s team then defeated the Los Angeles Rams in the Super Bowl two weeks later.

If Kraft is convicted, he would be required to complete 100 hours of community service, attend a class on the dangers of prostitution and its connection to human trafficking and pay a $5,000 fine. He could also get a year in jail, although that is unlikely. He could also enroll in a diversion program. He would still have to perform the community service, attend the class and pay a fine, but he would avoid a criminal record.