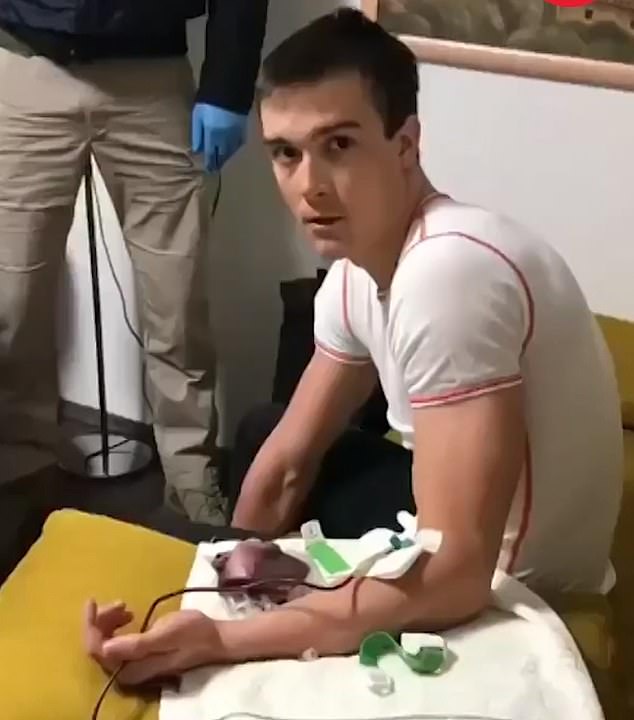 A sensational video has emerged of Austrian police walking in on Nordic skier Max Hauke while he was in the middle of a blood transfusion.

Olympian Hauke was among five skiers arrested in police raids in Seefeld on Wednesday targeting an alleged doping network amid the Nordic World Ski Championships.

The video, released by Austrian publication Vorarlberg Online, shows the sheepish-looking 26-year-old caught red-handed before taking part in a race. 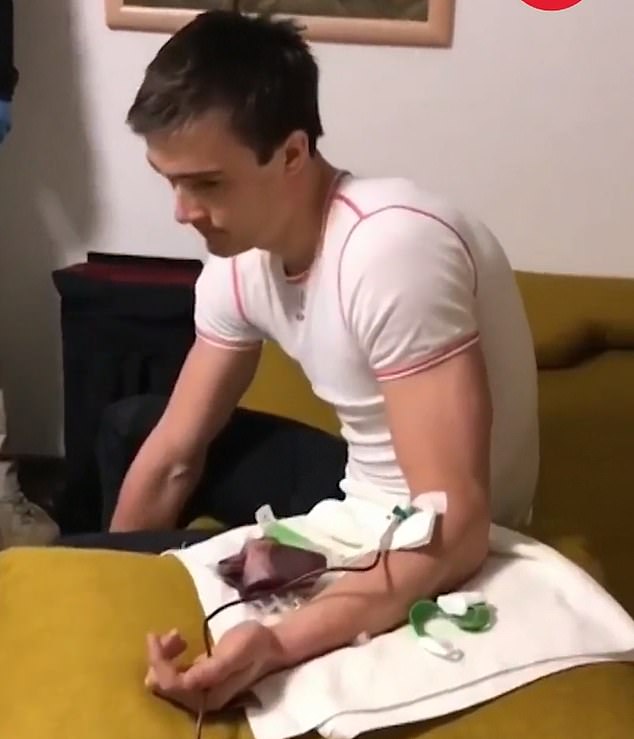 Hauke was one of five skiers arrested in police raids in Seefeld, Austria this week

Blood transfusions are banned by all sports because they allow athletes to boost the oxygen levels in their blood, improving performance and endurance.

The practice was outlawed in 1986 but high-profile cases have emerged in the Tour de France and blood doping was used by notorious cheat Lance Armstrong.

Hauke is a double-Olympian, having competed at Sochi, Russia in 2014 and PyeongChang, South Korea last year.

He had competed in two events in the world championships and recently won the Alpen Cup in 20km discipline in Slovenia.

The raids were part of a broader operation targeting a Germany-based ‘criminal organisation’ suspected of having carried out blood doping for years, the Austrian police said.

A 40-year-old sports doctor is believed to be at the centre of the organisation, the police said in a statement, adding that he was also arrested in Germany on Wednesday.

Mark Schmidt, who worked for the Gerolsteiner cycling team around the time Austrian rider Bernhard Kohl was stripped of third place at the 2008 Tour de France for doping.

Schmidt was arrested in Erfurt, Germany, where he has a medical practice.

In total nine people were arrested in 16 raids in Seefeld and Germany, the Austrian police said, adding that the operation was coordinated with the German authorities.

All of the suspects remain in custody, including Hauke who authorities confirmed was caught in the act of doping.

Munich’s state prosecutor’s office said the investigation was triggered by statements made by Austrian cross-country skier and doping offender Johannes Duerr to a German broadcaster earlier this year. 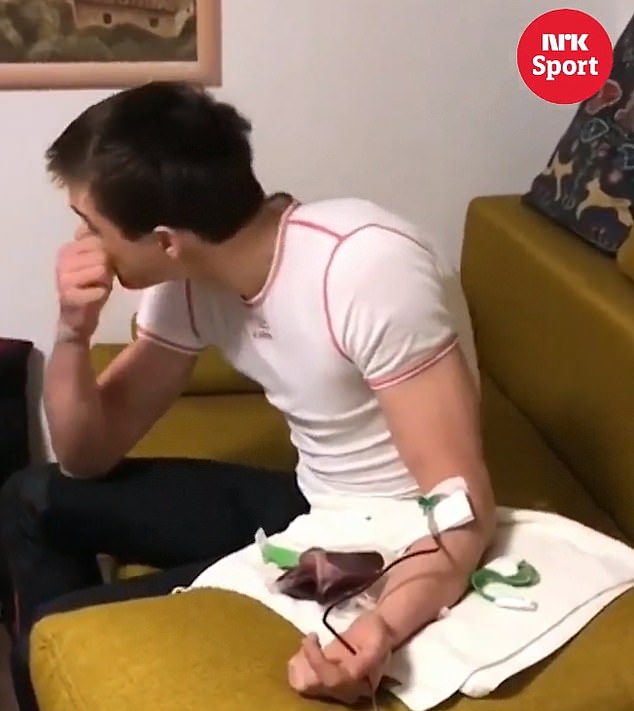 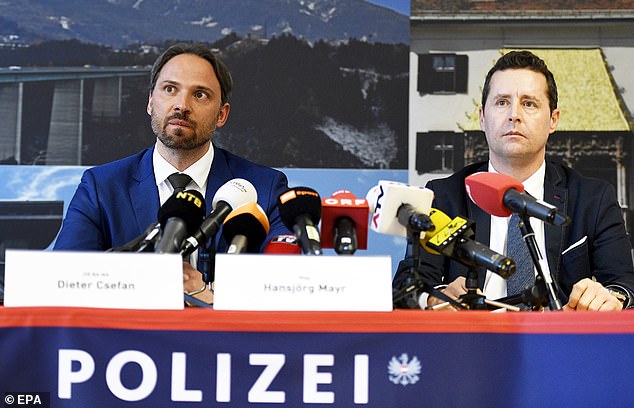 Dieter Csefan (left) of the Austrian federal police and Hansjoerg Mayr, Innsbruck public prosecutor spokesman at a press conference in Austria on Wednesday after the raids 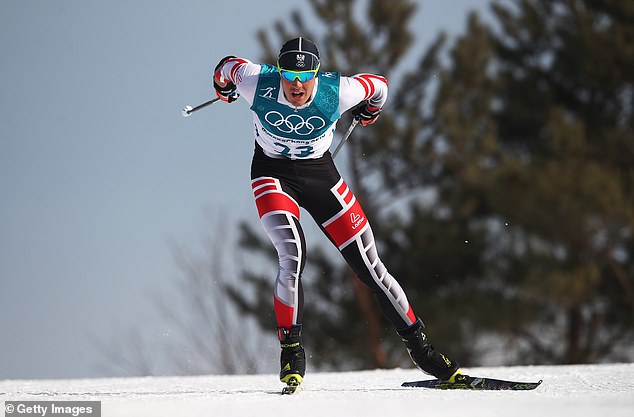 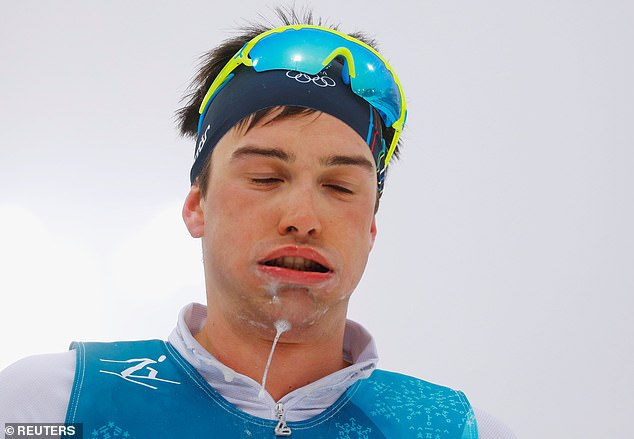 Duerr, who was caught doping during the 2014 Winter Olympics in Sochi, Russia, had talked to German broadcaster ARD in January.

Two of the athletes arrested in Seefeld are from Austria, two are Estonian and one is from Kazakhstan, the police said.

Blood transfusions are banned by all sports because they allow athletes to boost the oxygen levels in their blood, improving performance and endurance.

The practice was outlawed in 1986 but high-profile cases have emerged in the Tour de France and blood doping was one of the main methods used by notorious cheat Lance Armstrong.

Nordic cross-country skiing takes place over distances as far as 50km, with competitors joining together in a mass start and racing to the finish.

It is an extreme endurance event and a competitor who cheated by using blood transfusions would enjoy a strong advantage over clean rivals.

A number of tests exist to see if athletes have cheated in this manner, but detection can be hard without constant testing because its effects wear off quickly.

Seefeld is hosting the 2019 Nordic World Ski Championship, which continue until Sunday and include cross-country skiing and ski jumping.

Nordic cross-country skiing takes place over distances as far as 50km, with competitors joining together in a mass start and racing to the finish.

It is an extreme endurance event and a competitor who cheated by using blood transfusions would enjoy a strong advantage over clean rivals.

Hauke and Dominik Baldauf are cadets in the Austrian police, according to a recent interior ministry news release congratulating them on finishing in sixth place in the team sprint at the worlds.

Hauke is asked in the video if anyone else is at home, to which he replies by shaking his head.

He said: ‘It’s not nice. It is difficult. There is no room for it in sports and I did not realise that he was doing it. 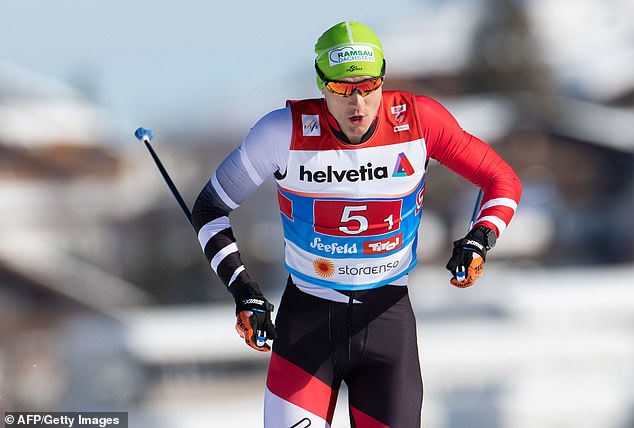 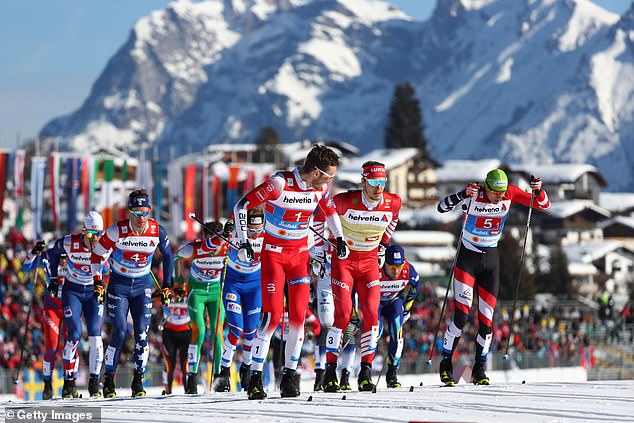 Hauke, who was caught in the act of doping, is pictured right (wearing number 5), three days before the raid. There is no suggestion any of the other skiers pictured are involved in doping 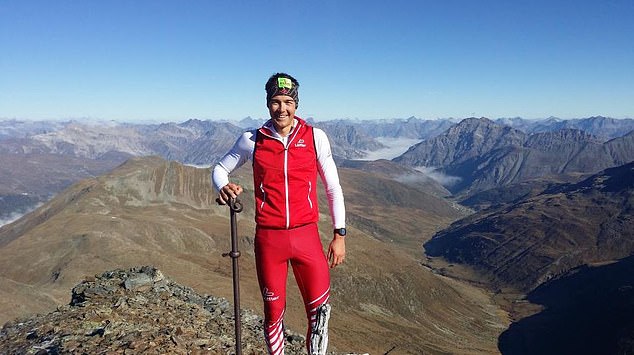 ‘It is difficult to describe what you feel after seeing a friend cheating. I don’t hate him, but at the same time I don’t want him back in the cross-country circuit. You can’t come back after you’ve done that.’

Olympic cyclist Callum Skinner condemned the incident on Twitter: ‘This is a serious welfare issue.

‘Self administered or aided there is no excuse for this. It’s sad that an athlete or support staff would put performance enhancement above their or their athletes health.’ 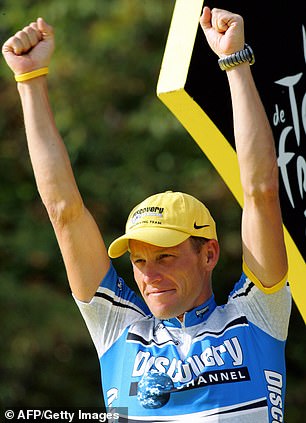 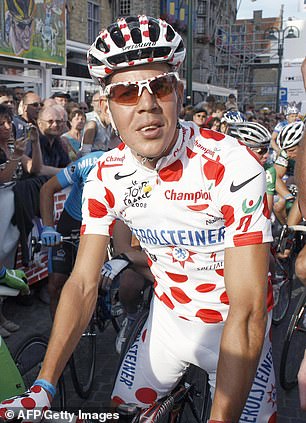 Drug cheat Lance Armstrong (above, hands raised) was involved with blood doping, while the doctor arrested in the current case worked for the Tour de France team that saw Austrian Bernhard Kohl (posing on bike-seat) stripped of his third-place finish in the 2008 race over doping

The raids were part of an investigation that has lasted several months on suspicion of ‘professional sport fraud’ and ‘use of prohibited substances and methods for doping purposes’.

The other two athletes suspected of involvement in the doping ring are Estonian teammates Karel Tammjarv and Andreas Veerpalu, the Estonian ski federation said in a statement.

Veerpalu, who competed at last year’s Olympics, is the son of the two-time Olympic gold medalist Andrus Veerpalu, who was acquitted of a doping charge in 2013 by the Court of Arbitration for Sport.

In that case, the CAS panel ruled that ‘there are many factors in this case which tend to indicate’ that Andrus Veerpalu had taken human growth hormone, but the testing procedure wasn’t reliable enough for a guilty verdict.

This is not the first time that Austrian skiing has been hit by a doping case.

At the 2006 Olympics in Turin, the Austrian cross country and biathlon teams had their headquarters raided by Italian police and drugs testers in a high-profile doping scandal.

None tested positive but half a dozen athletes were banned for life after the discovery of syringes and other equipment, and the Austrian Olympic Committee was fined for anti-doping rules violations by the International Olympic Committee.