Daniel Jacobs’ promoter suggested Wednesday that Jacobs could ignore the 170-pound limit for his second-day weigh-in the morning of his fight against Canelo Alvarez. The steep penalty – $250,000 per pound over 170 – was thought to be prohibitive, but Hearn clarified that weighing over 170 pounds Saturday morning wouldn’t cost Jacobs his IBF middleweight or prevent the fight from happening. 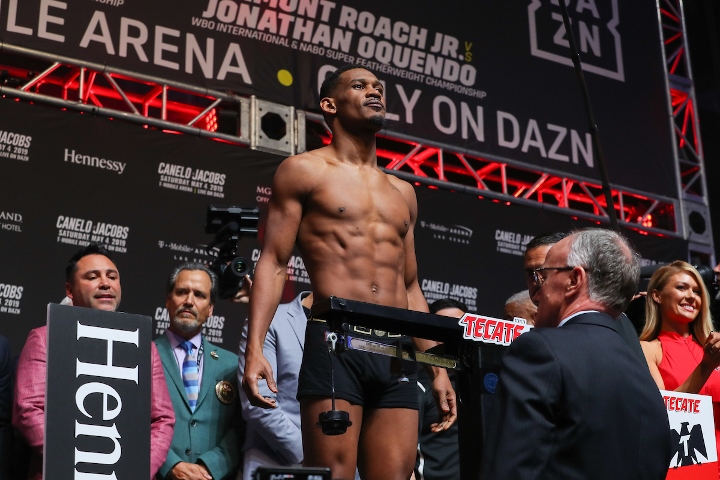 A strict confidentiality agreement among the two sides was supposed to have kept both camps from disclosing what Alvarez and Jacobs weighed Saturday morning. It is not clear if De La Hoya will have to pay a penalty for disclosing the weights or, if so, how much money it’ll cost Golden Boy Promotions.

Regardless, Jacobs weighing in 3½ pounds more than what was allowable in their contracts will not prohibit their 12-round, 160-pound unification fight from taking place Saturday night at T-Mobile Arena. According to his contract’s terms, however, those 3½ pounds should cost Jacobs $1 million because an ounce over three pounds would count as four pounds.

Jacobs’ purse is just above eight figures, despite that it’s listed as $2.5 million on his Nevada State Athletic Commission contract. Alvarez’s NSAC contract lists his purse as $35 million.

Jacobs officially weighed in at 160 pounds Friday at T-Mobile Arena. Alvarez stepped on the NSAC’s scale at 159½ pounds.

Alvarez’s team demanded the second-day weigh-in while negotiating for their middleweight title unification bout because of Jacobs’ size advantage.

Former middleweight champ Gennadiy Golovkin and his team accused Jacobs of gaining an unfair advantage when he skipped the IBF’s second-day weigh-in the morning of their March 2017 fight at Madison Square Garden. Brooklyn’s Jacobs never intended to attend that second-day weigh-in, but his team didn’t alert Golovkin’s handlers before he didn’t appear at it.

Jacobs has since won the IBF middleweight title, but the New Jersey-based sanctioning organization’s second-day weigh-in rule isn’t in effect for his bout with Alvarez because it’s a unification fight. Mexico’s Alvarez owns the WBA and WBC middleweight championships, the same two titles for which Jacobs boxed Golovkin.

The 32-year-old Jacobs told a group of reporters Tuesday at MGM Grand that he intends to weigh a maximum of 175 pounds when he enters the ring Saturday night to face Alvarez. That would limit him to gaining only 1½ pounds in the roughly 12 hours between the second-day weigh-in and the beginning of their fight.