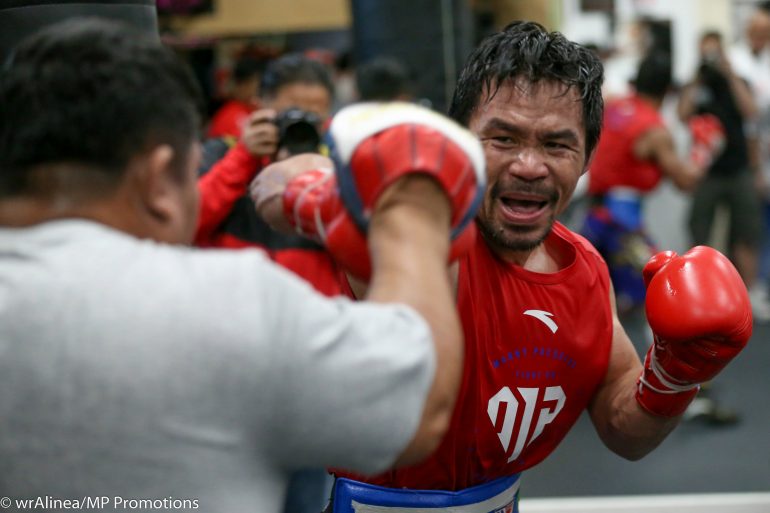 Even at age 40, Manny Pacquiao is faster than most fighters competing today.

During a frenetic workout with trainer Freddie Roach on New Year’s Eve at the hall of famer’s Wild Card Boxing Club in Hollywood, Pacquiao showed that he has plenty of energy left in the tank.

Later this month, he’ll embark on his first stateside fight in over two years, a Showtime Pay-Per-View vs. Adrien Broner on January 19 at MGM Grand in Las Vegas. Pacquiao, boxing’s only ever eight-division champion, is favoured to defeat Broner; he told The Ring he plans to do so via knockout.

Now that Pacquiao is aligned with PBC, there’s a wealth of tantalizing options for his next fight provided Pacquiao wins as expected. PBC controls the welterweight division: titleholders like Shawn Porter and Keith Thurman are advised by Al Haymon. And then there’s Errol Spence Jr., the 147-pound titleholder who is rated No. 1 by The Ring.

Spence has a Fox PPV fight with Mikey Garcia on March 16. Pacquiao will be watching with keen interest.

“There’s a lot of future possible opponents, including Mikey Garcia,” Pacquiao said. “I think we have the same promoter so it’s possible.”

Spence and Mikey meet at AT&T Stadium, home of the Dallas Cowboys. Pacquiao has competed twice in the massive domed venue; a matchup against the winner shapes up as a true mega fight.

Pacquiao plans to fight again in either May or July before taking off the rest of 2019 to focus on his duties as Senator in the Philippines. For now, he’s focused on Broner, but also is taking note of Spence’s rise through the sport.

Pacquiao-Broner is a big fight, and a nice way to usher in the final stage of Manny’s illustrious career. A bout with the winner of Spence-Mikey? That’s the kind of marquee event Pacquiao’s participated in countless times, and another chance to prove he’s still among the sport’s elite.