Jamie Vardy has joined Kasper Schmeichel in denying any involvement inClaudio Ranieri’s sacking as Leicester manager as senior players broke their silence on the Italian’s departure from the Premier League champions.

Ranieri left the club on Thursday only nine months after guiding the Foxes to a remarkable 5,000-1 triumph but until Saturday none of the key figures in that title-winning team had spoken publicly about the sacking. Writing on Instagram, Vardy said: “I must have written and deleted my words to this post a stupid amount of times! I owed [it to] Claudio to find the right and appropriate words! Claudio has and always will have my complete respect!

“There is speculation I was involved in his dismissal and this [is] completely untrue, unfounded and is extremely hurtful! The only thing we are guilty of as a team is underachieving which we all acknowledge both in the dressing room and publicly and will do our best to rectify. I wish Claudio the very very best in whatever the future holds for him. Thank you Claudio for everything.”

Earlier Schmeichel insisted reports of a meeting between the club’s owners and several players that led to Ranieri’s dismissal were untrue. He told the BBC: “There’s absolutely no truth in that whatsoever. We are players and we can only affect [things] on the pitch. What happens above our heads at boardroom level is completely out of our control. 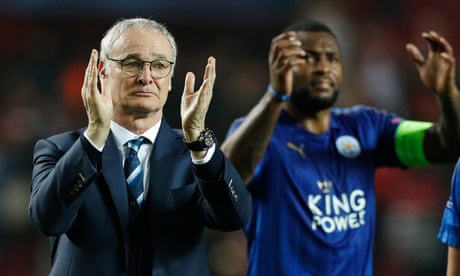 “All these reports about meetings, I don’t know where they’ve come from. What I can say is our owners are very hands on, they are in and around the club all the time. They come to practically every game, they come to the training ground and they speak to all the players regularly.”

The winger Riyad Mahrez made plain his feelings, tweeting: “You believed in me from day one. Huge Thank you for everything and good luck.”

Ranieri visited Leicester’s training ground early on Saturday morning to say goodbye to his former players and staff. “I don’t speak with anybody, just to say thank you to the fans. They are fantastic. Thank you,” he said when asked for a quick word by a Sky Sports reporter as he drove away.

On how he was feeling, he said: “I feel good now, because what we achieved in Leicester … I hope it will happen again but it will be very difficult.”

When asked if it had been an emotional meeting with his players, he insisted it had been “normal”.

Leicester’s sense of crisis will not have been eased by the club dropping into the bottom three after victory for Crystal Palace against Middlesbrough.