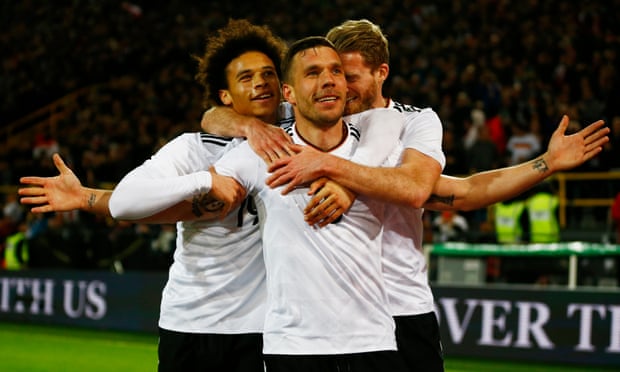 The harsh reality is that Gareth Southgate’s first match since taking the Englandjob full-time ended in disappointment and Germany have still not conceded a goal since Euro 2016, a sequence incorporating seven games – or, to put it another way, coming up for 11 hours of football.

Ultimately, though, England should not be too desolate bearing in mind their impressive contribution for long stages. A reasonable argument could be made that they were the superior team for the opening hour and, though Southgate will not want to make a habit of losing gallantly, he could be forgiven for thinking his new-look team deserved better than to lose to a spectacular 68th-minute goal from Lukas Podolski, making his final appearance for the German national side.

Podolski chose a good moment to score with a firecracker of a shot on a night when England’s new 3-4-3 formation, featuring a full debut for Michael Keane, coped ably and Southgate’s decision to try a new formation was justified by the overall performance.

Southgate’s selection was a nod to what Antonio Conte has done at Chelsea but it was certainly a calculated gamble to play that way after only one training session. The last time an England manager experimented with three centre-halves was in October 2006 when Steve McClaren was in charge of a fairly wretched defeat in Croatia. Before then it was Peter Taylor’s solitary game against Italy in January 2000. Kevin Keegan and Glenn Hoddle have had a dabble but this was only the third occasion since the turn of the century that an England side has dared to move away from an orthodox back four.

The paradox was that John Stones, the English defender best suited to this system, was left out, but that was only because Southgate had detected signs of fatigue from the Manchester City defender. Ryan Bertrand and Kyle Walker are naturally suited to the wing-back role and quickly settled into their positions in the new structure. Jake Livermore was put alongside Eric Dier to give the team some midfield security and the front three of Adam Lallana, Dele Alli and Jamie Vardy had the licence to interchange positions rather than operating in set roles.

Lallana’s international career has been a slow-burner but, having finally come good, he is now regularly one of England’s better performers. Vardy’s habit of trying to win dubious penalties is not one of his more attractive features but he was a difficult opponent for Germany’s centre-halves. Alli always looks like he wants to make a significant contribution to every match and together those three caused plenty of problems with their movement in and around the penalty area.

If it was slightly peculiar to see Germany looking so susceptible on their own ground, it was worth noting that Joachim Löw’s team quickly gave the impression they intended to address the match at three-quarter pace and would be grateful if their opponents did likewise. Yet England did not look willing to oblige during a first half when they had enough opportunities to reflect they ought to have made at least one count.

Lallana ran with the ball, from left to right, all the way from the halfway line after intercepting a stray pass on the half‑hour only for his left-foot shot to come back off the post. Otherwise, England’s best opportunity of the first half fell to Alli after Vardy had poked the ball to his team-mate just inside the penalty area. Alli had the time to take a touch and steady himself but Marc-André ter Stegen was quick to come off his goal-line and saved the shot. 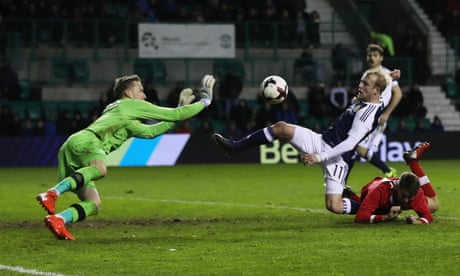 Steven Naismith rescues Scotland on a miserable night against Canada

This, however, was encouraging for England. They were playing with a competent structure, knocking the ball around confidently and, perhaps most impressive of all, they seemed more than happy to take the game to the world champions. The only criticism during that opening period related to the repertoire of songs from England’s end about winning wars and shooting down planes. Evidently we are still in an age when many of the team’s followers feel compelled to boo the German national anthem. At least the team were trying to show they were moving forward.

For long spells Germany ambled through the match like a side that believed this was little more than a glorified testimonial on behalf of Lukas Podolski, wearing the captain’s armband and playing as centre-forward on the night of his 130th and final cap.

There were only sporadic moments when Leroy Sané showed the nimble running and quick footwork that has made him so productive for Manchester City over recent months. Podolski had also been on the edges for long spells before his goal and on the occasions Germany did press forward in numbers there was always the threat that Vardy’s speed and directness could trouble the less mobile Mats Hummels on the counter-attack.

Southgate brought on Nathan Redmond and James Ward-Prowse during the second half to give the two Southampton players their first appearance at this level and, as for as the other new cap, Keane fully justified his selection with an impressive display.

The lesson for England, however, is that they have to be more clinical with their chances; otherwise they risk the kind of moment that Podolski produced as his farewell contribution. The former Arsenal player was 30 yards out when the ball came to him and his shot was struck with unstoppable power. Podolski always had a formidable left boot when he was taking aim at goal and this one was still rising as it soared into the top right-hand corner of Joe Hart’s net.