The Chelsea manager, Emma Hayes, was philosophical in defeat as Arsenal scored five on the road to reclaim top spot in the Women’s Super League.

“Let’s put life into perspective, it’s not the worst thing in the world,” Hayes said. “Being humbled occasionally doesn’t do us any harm. They’re in the ascendancy and their top players played well today.”

The last time these two teams faced each other Arsenal were handed a similarly humbling 3-1 defeat in the FA Cup final as Chelsea completed the double on the back of an unbeaten league season.

A lot can change in a summer. With Chelsea’s squad undergoing an overhaul and Arsenal finally looking every bit the slick passing side Joe Montemurro has worked to build since his arrival in November, the roles were reversed at Kingsmeadow.

In a masterful attacking display orchestrated by Kim Little, Jordan Nobbs and Lia Wälti in midfield Arsenal put five past the champions to take their season’s goal tally to 33 – with an impressive eight different scorers.

Montemurro was keen to stress the importance of the fine margins in games against the top teams. “We’re happy that the game plan went well,” he said. “It was a good day, they had a couple of chances in the first half, the game could have gone a different way if they had gone one up. We had to weather a bit of a storm.

Arsenal have been the team to watch this season with 16 goals in three league games but their trip south offered up their first real test. Chelsea have been a wall at the back – before the visit of their London rivals, the Blues had not conceded at home in 11 WSL games.

In the early exchanges in the wet mist Chelsea started the brighter side with Ji So-yun and Fran Kirby combining nicely to trouble the Arsenal back line. In the fourth minute the Reds were given their first scare when Kirby played in Adelina Engman only for the Finn to miskick wide.

With five minutes left of the half the Gunners doubled their lead, Little sliding the ball through to Miedema whose shot took the slightest of deflections to wrong-foot England’s Carly Telford.

After the break Chelsea tried to claw their way back. A Ramona Bachmann cross looking for Drew Spence was fumbled by Pauline Peyraud-Magnin but Leah Williamson, brilliant throughout, was on hand to save the goalkeeper’s blushes and prevent a Spence tap-in.

From then it was the Arsenal show. First a bit of luck saw Nobbs’s teasing cross towards Miedema catch the wind and curl into the net from an acute angle.

Just four minutes later Arsenal had their fourth, Beth Mead forcing a save from Telford before Miedema powered the rebound home, her ninth goal of the season. 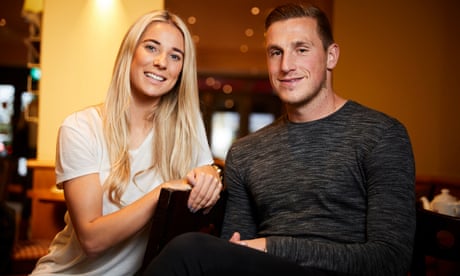 With Chelsea frustrations running high, Spence went in the book for catching Little clumsily on the ankle, forcing the Scot to make way for Katie McCabe. Nobbs, furious at the challenge, describing it as “a horrendous tackle”, flew at Spence and the players were pulled apart. Nobbs had the last laugh, racing on to Mead’s through ball to finish under an onrushing Telford for Arsenal’s fifth.

Chelsea, shellshocked, huddled after the fourth and fifth and tried to find something for their fans to cheer about but to no avail.

This was a statement of intent from the Gunners. But Nobbs was cautious in her optimism: “Naturally it’s a big statement but us, of all people, know how quickly the league can change and how quickly points can be dropped in games,” she said. It’s great for our confidence and our belief but we still need to take every game as it comes because we’ve got a lot of tough challenges ahead.”

After dominating the women’s game with 43 trophies in their 30‑year history, Arsenal have not won the title in six years. When Montemurro arrived he said he wanted to “put Arsenal back where it should be”. If this game is anything to go by, it looks as if he will succeed in that endeavour.