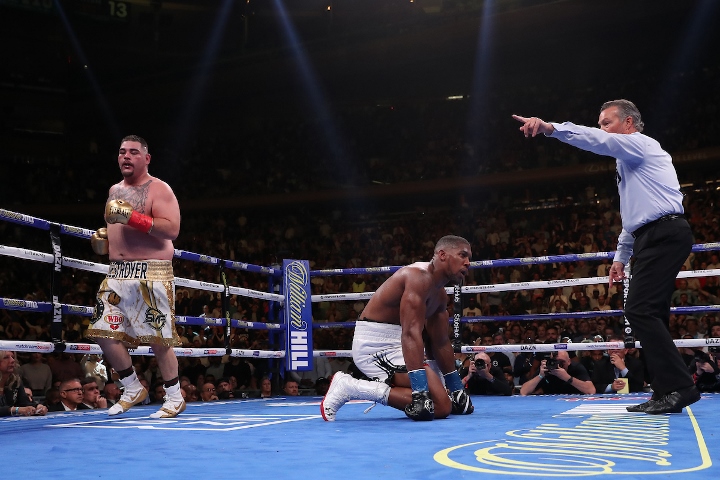 IT IS DIFFICULT to know where to start when it comes to assessing the heavyweight landscape after the shock outcome in New York between Anthony Joshua and Andy Ruiz jr over the weekend.

I think the first thing that should be pointed out in offering up a few thoughts is that I do so with no hidden agenda. I take absolutely no pleasure in seeing a British world champion lose his belts, whatever promotional ties he might have.

I have rated Joshua very highly since seeing him in his amateur days and it is no secret that I tried my hardest to sign him when he turned professional following his 2012 Olympic success, but unfortunately got pipped at the post.

It has to be said, however, that the warning signs of what transpired at Madison Square Garden have been evident for some time now.

I’ve felt, probably since the Dillian Whyte fight, that he hasn’t improved his defences as a professional. He has remained with his amateur trainer and, along with many others I suspect, I was surprised by the dialogue between them inbetween rounds.

I’m sure there will be an inquest by Joshua and he will have some big questions to answer. One for me would be his trainer.

He has continued to train at the Team GB facility up in Sheffield and from what you hear most of the time, he has been working with the amateurs up there, who have provided the bulk of his sparring.

The fact Joshua uses a publicly funded facility and trainer as a highly rewarded professional I don’t think is right anyway, but that is another matter.

Suffering defeat in such a manner to Ruiz did come as a surprise, but the vulnerability of Joshua has been there for all to see over a number of fights now. He has been clipped by a good few opponents and nothing seems to have been done to minimise the risk.

He is very good offensively, moving forward and letting his shots go, but against Ruiz he was on the back foot. It was a great shot that put Ruiz down, but when he got up he exploited all the glaring chinks in Joshua’s armour.

He got caught with a left hook and after taking one on the top of head he looked uncomfortable and like he didn’t want to be in there.

After the fight he really didn’t seem too distressed over being stopped and, while you might say he was being a good loser, there was something about it all that didn’t sit right with me.

It just seemed to be quite a strange situation all round.

With the benefit of hindsight, you do wonder if he will regret the decision to spurn the guarantee of $80m for two fights against Deontay Wilder. That is gone now and you would question if he has made that money up in the meantime, which he would have banked by now, win or lose.

I have heard a few suggestions already claiming he might have been clipped a few times in sparring, but that is the place to sort any issues out and work on things that aren’t going right.

Looking at the bigger picture, talk has now turned towards a rematch later this year that will be anything but a foregone conclusion as far as Joshua is concerned. Ruiz will have a full camp to prepare knowing that he has got the beating of him.

You only have to look at the difference between Tyson Fury getting knocked down by the biggest puncher in boxing and then getting up and winning the round, as opposed to Joshua who went into his shell. He just couldn’t get himself right and it might just be that Ruiz has got his number.

In fact, from watching it all unfold, most heavyweights might think they have got his number now.

The trouble with pre-ordained rematches is that it is not always down to the fighter to determine who his next defence will be against. The IBF rules are very strict on mandatories – and I cannot see Top Rank walking away from Kubrat Pulev’s shot at the title – with the next in line being the WBO, with Dillian Whyte in pole position.

What will happen there? Will they push on behalf of Whyte and his interests? Whyte will have to play the waiting game if he chooses to sit on his WBC spot because Wilder has just completed a mandatory defence.

The upshot could well be that the heavyweight jigsaw becomes fragmented again and there is the opportunity for other characters to come into play. As it stands at the moment the title belts have changed hands to the PBC, which is also the home of Wilder, so they are going to hold some serious sway in the heavyweight division.

As for Joshua, he is going to have to rebuild his confidence after a shattering defeat, while Tyson Fury will have to be very much on his guard. People keep talking about easy or knockover opponents, but Tyson has got a job to do on June 15.

Tom Schwarz has got the chance to change his life in Las Vegas. Schwarz is a big guy who can punch and is also young and unbeaten. He will take inspiration from Ruiz.

Tyson though is not complacent and has been training hard since his fight with Wilder. If he did think he was in for an easy night’s work, he might just think again after watching a big favourite tumble in New York.