Reliable Kun gets it done!

The Argentinean goal machine watched his side go behind, then throw away the lead, before popping up with a trademark finish to lash home goal 178 from just 264 games.

Pep Guardiola’s attacking talents have been getting all the praise for their blistering start to the Premier League season.

But it was centre-backs Nicolas Otamendi and John Stones who headed home a corner each to cancel out strikes from Lorenzo Insigne and Jorginho before Kun settled the tie and Raheem Sterling pounced.
Napoli had two good chances inside the first 12 minutes, Marek Hamsik hit a piledriver that Ederson did well to save.
And goal machine Dries Mertens should have done better when he was slipped in on the Man City goal but dinked a limp ship into the Brazilian’s hands.

And on 21 minutes the Italians were ahead Insigne carved through Man City’s defence and fired the ball into the fire corner with Ederson missing out on his early hat-trick of saves.
City were shocked into life by the Inisgne strike and Sergio Aguero and Ilkay Gundogan had decent chances to level. 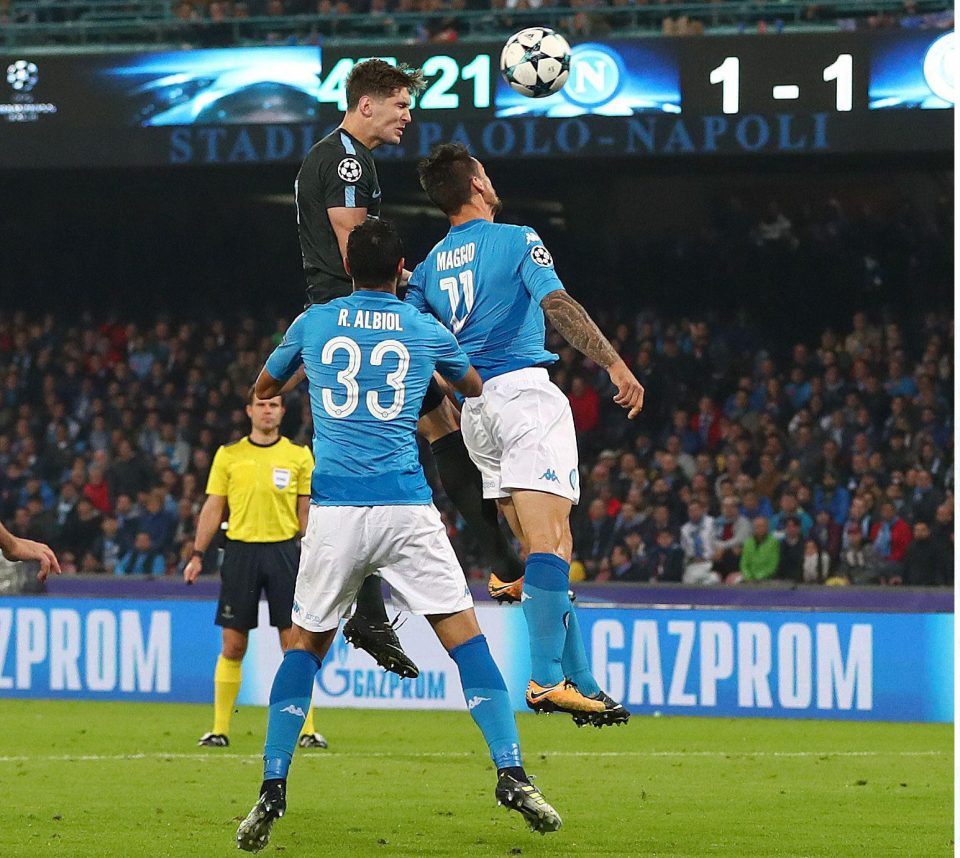 But that award was given to Otamendi who towered over everyone in the Napoli defence to head home a Gundogan cross on 34 minutes.
Pep Guardiola’s men looked fortunate to make the break level after the home side had dominated so much.
But the tables were turned in the second half when the Premier League side snatched the lead.
Another corner was cleverly taken and fizzed in and Stones shot up through the air to thud the ball against the cross bar and down behind the goal line.

The much-maligned assistant linesman stationed on the byline – who can sometimes go months without any involvement – flew into action to award the goal.
Napoli were not ready to roll over and Insigne left Ederson’s crossbar trembling with a rasping shot on 57 minutes after bamboozling left-back Danilo.
And they equalised on 62 minutes after City were sucked into handing over a penalty and unravelling their sterling start to the second half.

Creative genius Leroy Sane finally showed a chink in his armoury when he hacked away at a clearance and instead floored Raul Albiol.
Jorginho converted the spot-kick with a little skip in his run-up that seduced Ederson into diving early.
With the game poised and the dominance swinging it was a rapid Man City counter-attack and Aguero shot that made the difference.
Middleweight powerhouse Fernandnho fed Sane who scuttled through the Napoli midfield and when he was tackled the ball sat inviting up for Aguero who – as ever – made no mistake.
Moments after overtaking Eric Brook the former Atletico Madrid man was subbed as Guardiola tried to kill-off the game.

And with seconds remaining Sterling popped up to punish the Serie A side after another Kevin De Bruyne assist.