JUVENTUS 3-0 ATLETICO MADRID (agg 3-2): A Cristiano Ronaldo masterclass inspired Juventus into the quarter-finals of the Champions League. The Italian champions overturned a two-goal deficit from the first-leg in Spain thanks to a Cristiano Ronaldo hat-trick on a feverish night in Turin. Ronaldo headed home in the 27th minute and then the 49th before thumping home from the penalty spot with four minutes remaining after Fernando Bernadeschi was fouled by Angel Correa.

This was Operation Cristiano Ronaldo in all its glory. Without the Champions League trophy since 1996, Juventus turned to the man who has caused them – and so many others – so much heartache and a man who is never far away from the trophy.

Just look at Real Madrid without him. Stunned by Ajax. As for Juventus, they are profiting immensely. Having fallen flat in Madrid, there was never a worry he would miss the mark again.

There was VAR drama. Goal-line technology was called into action and the final nail in the coffin came from the penalty spot – but in the end this is what he predicted. Ronaldo told us all he would score a hat-trick and he did. His finest moment in a Juventus shirt came at the most important moment. 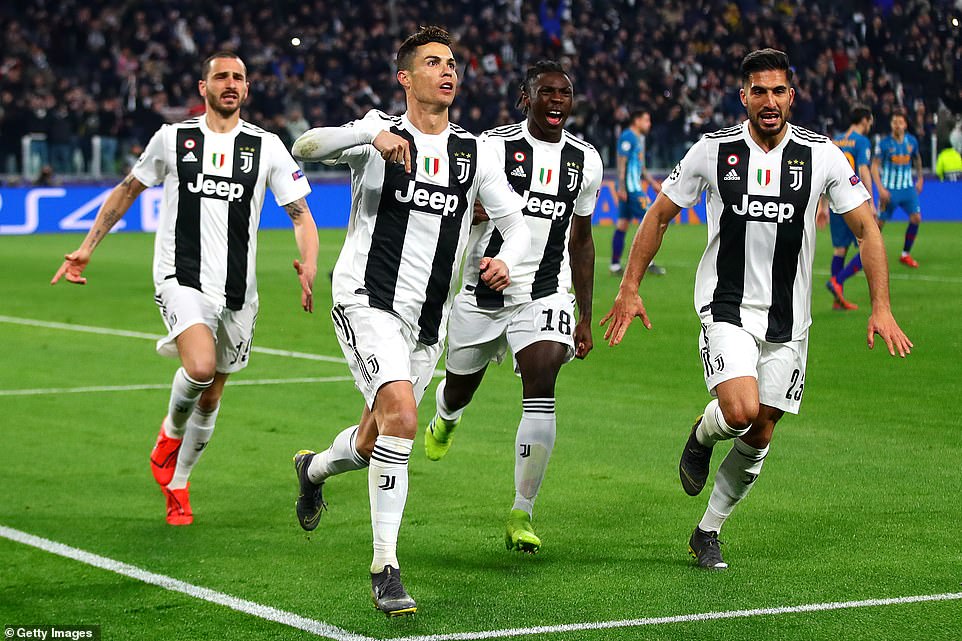 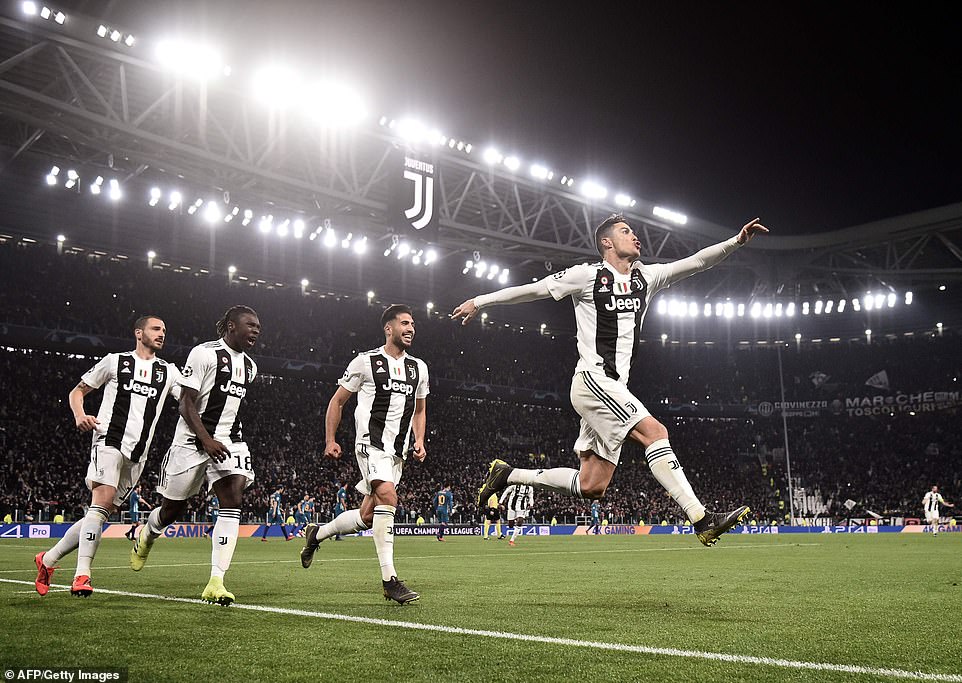 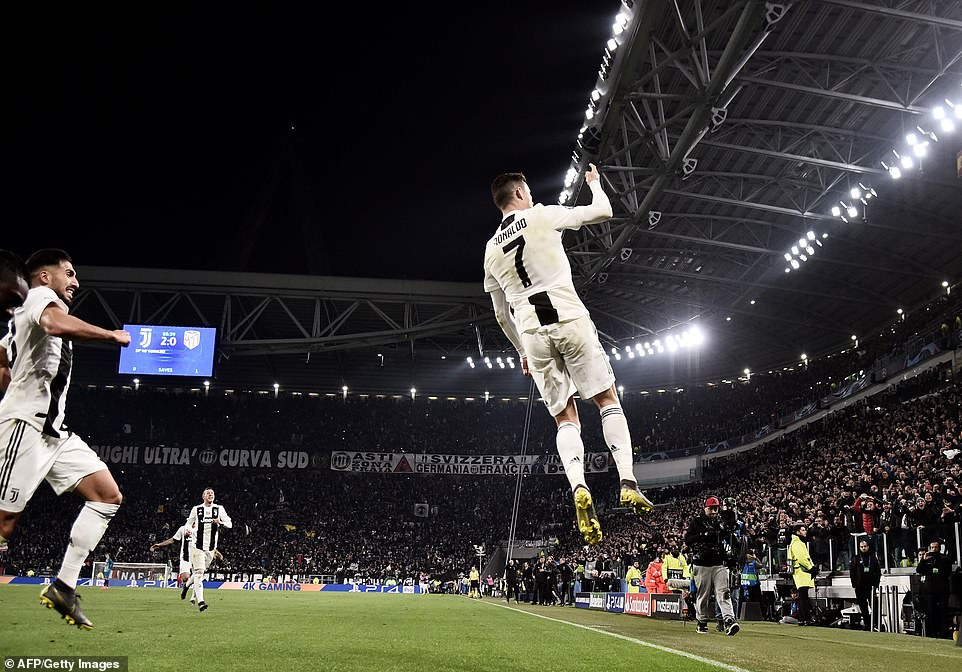 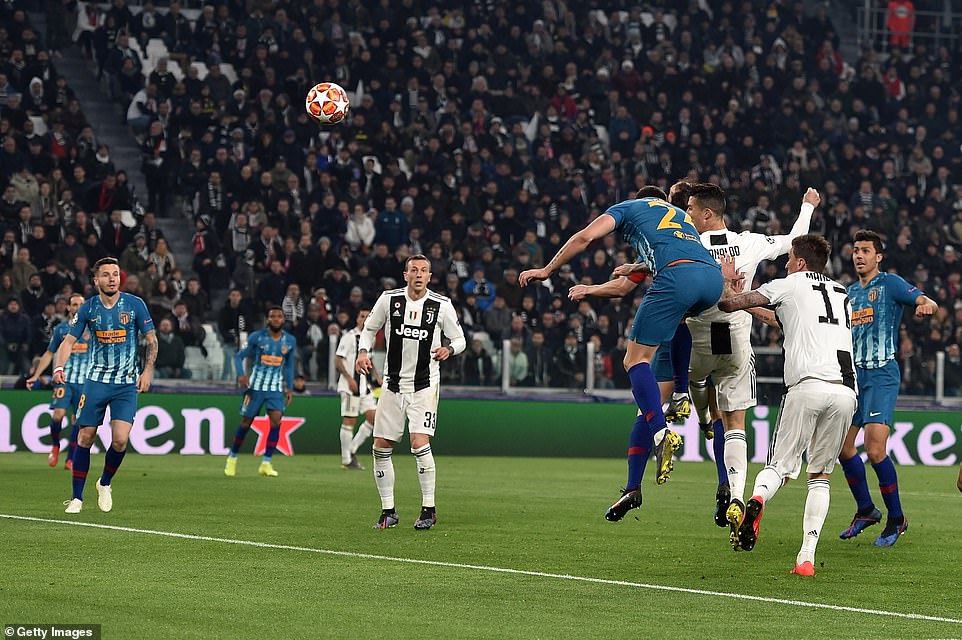 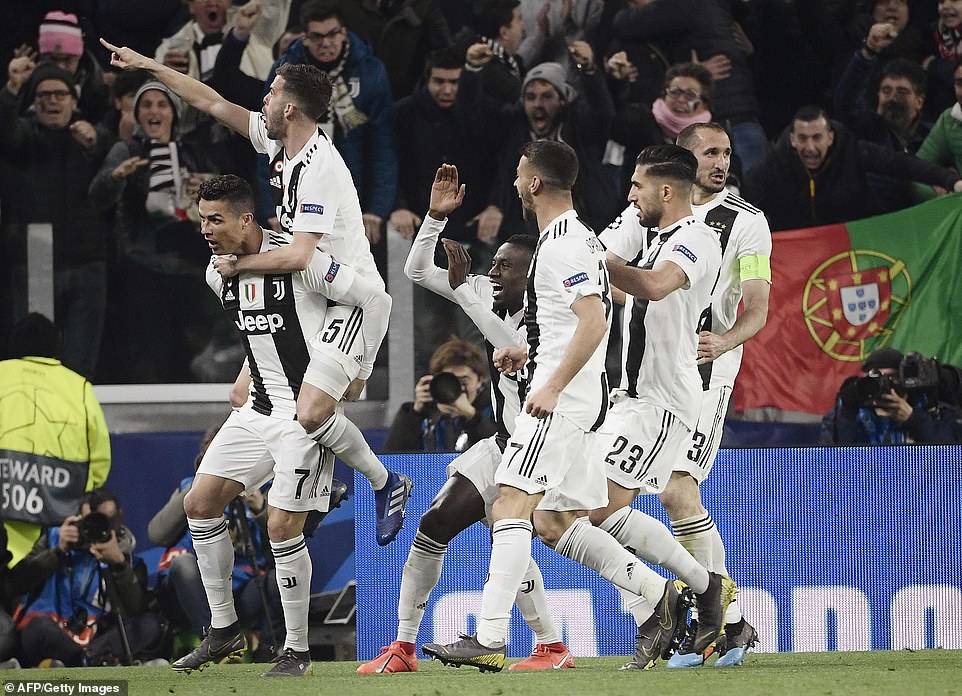 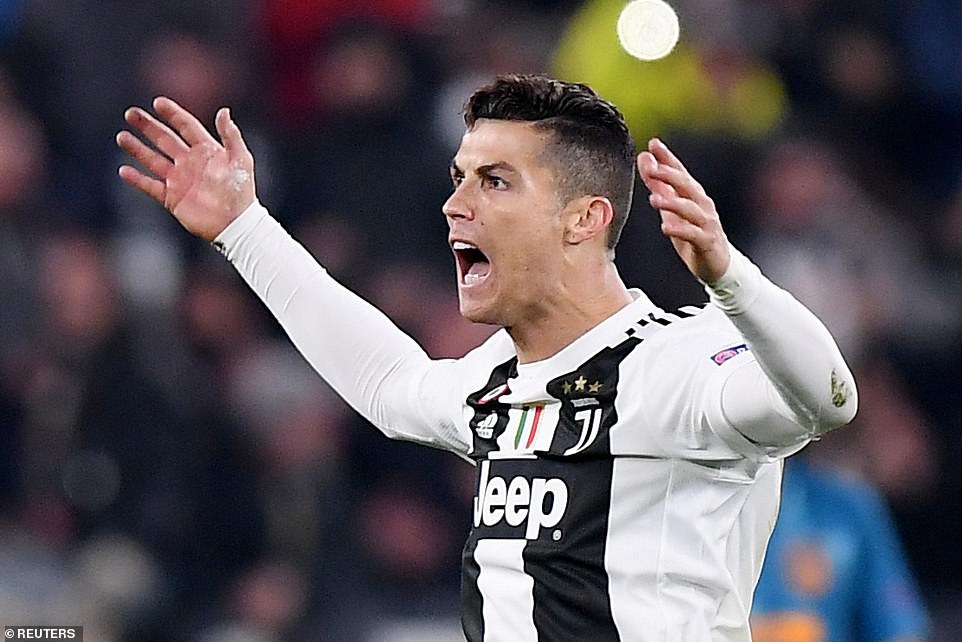 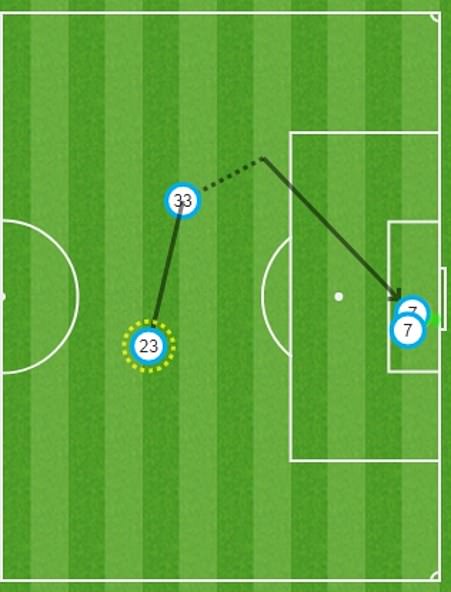 Juventus started like a squad possessed. The club’s ultras, housed in their Curva Sud stand behind the goal they attacked in the first half, cancelled their planned protest to ensure a sell-out for the visit of Atletico. A cacophony of noise every time Juventus had the ball. A chorus of boos with every Atletico touch.

It was almost the dream start. The home support knew how important an early goal would be and 30 seconds in a jinking run from Blaise Matuidi saw him fizz in a low cross, only for Mario Mandzukic to see his effort deflected away.

It was a sign of things to come and three minutes later Juventus thought they had cracked Atletico. But VAR begged to differ. Ronaldo stretched to win a loose ball in a tussle with Jan Oblak, it squeezed free and Giorgio Chiellini, making his 500th appearance for Juventus, converted.

There was no on-screen review but the decision was made. No goal. The comeback, for the time being, was still to get going.

Atletico’s hard work was done in the first leg. Sitting deep and allowing Juventus to attack them presented no real danger with Oblak a passenger for large spells while the Italians huffed and puffed. 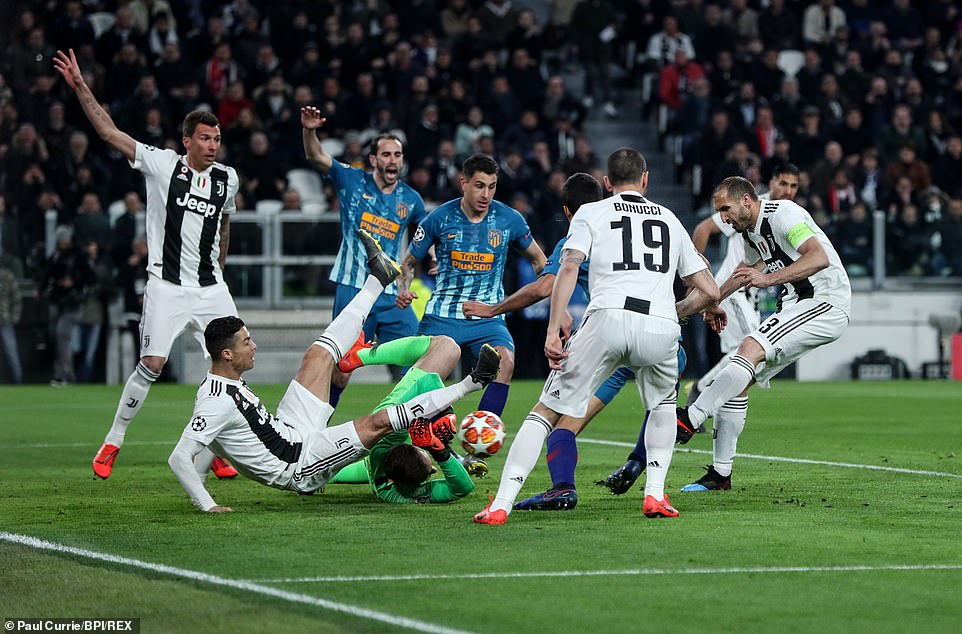 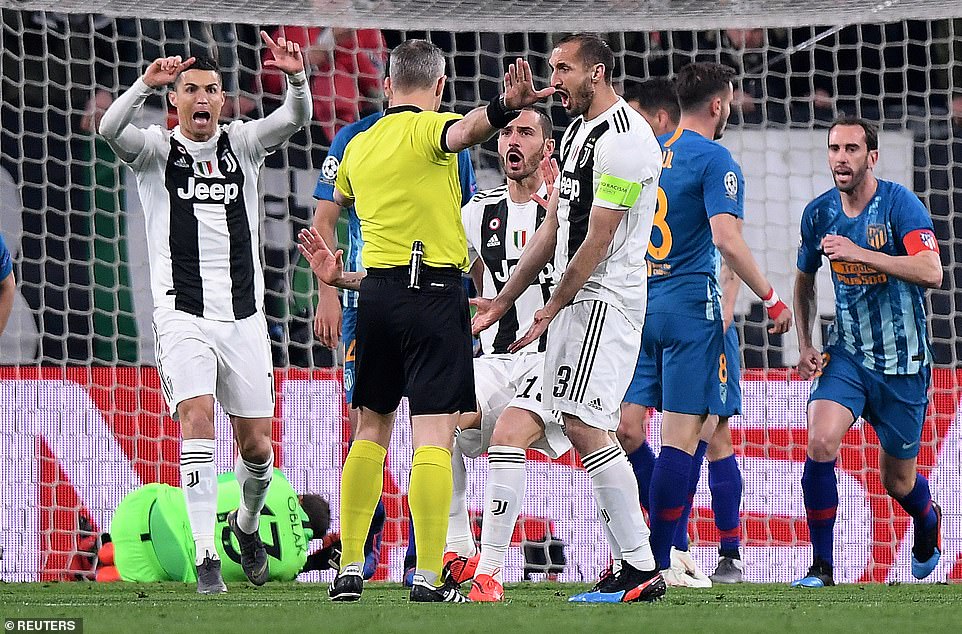 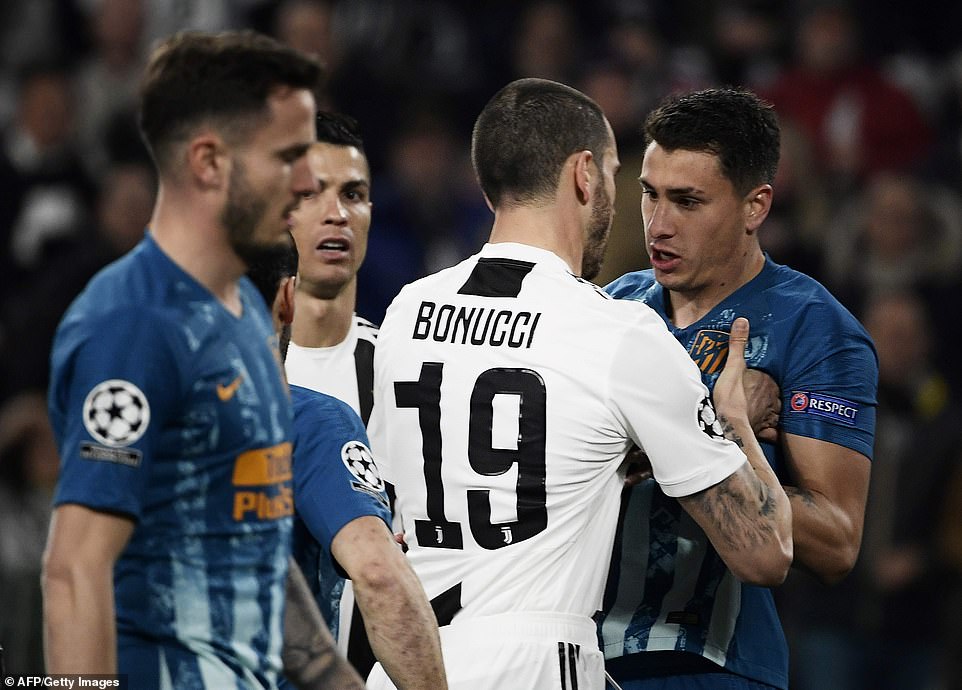 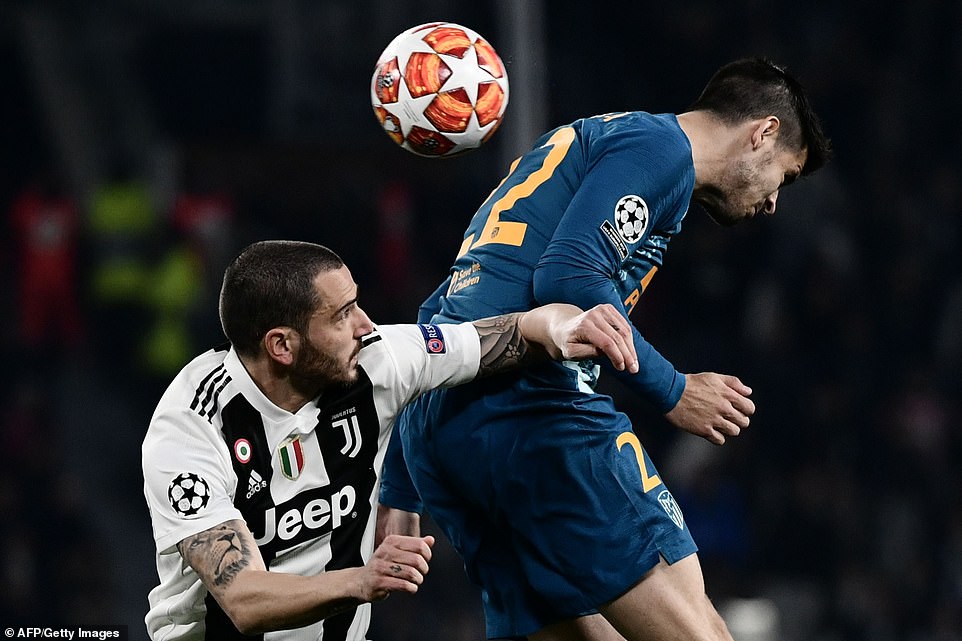 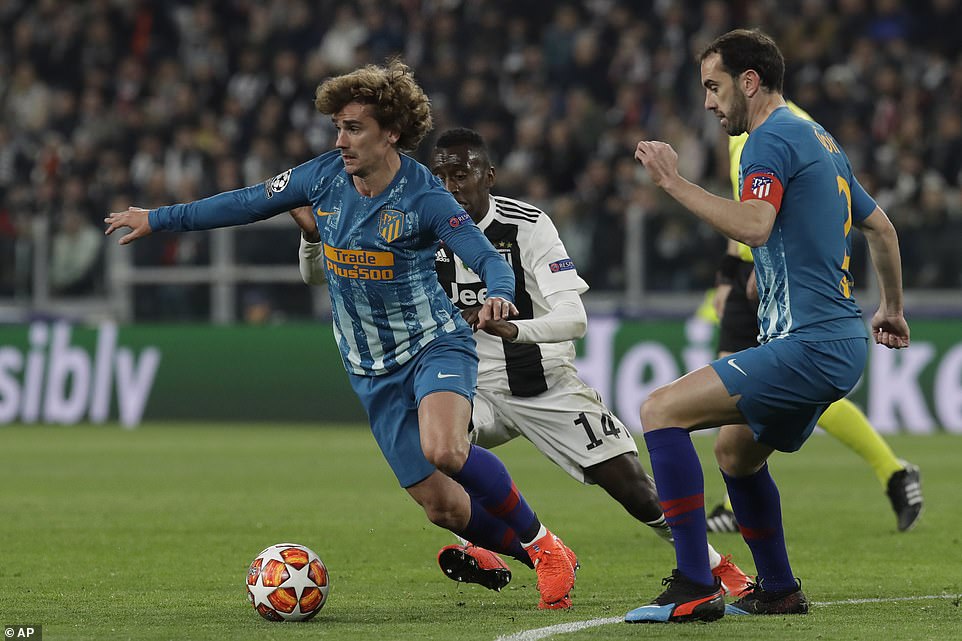 Then it came. Juanfran was exposed and Ronaldo struck. The Portuguese has had plenty of experience against the full-back, but at left-back Juanfran looked seriously vulnerable and as Ronaldo put his leap to good use, the ball flew past Oblak and the stadium erupted.

Halfway there. Ronaldo roared to the crowd to keep up the atmosphere. There was never any worry that Atletico could silence this lot.

Federico Bernadeschi, selected to start ahead of Paulo Dybala, enjoyed one of his finer performances in the black and white shirt in recent memory as he proved a constant menace.

So high was the attacker’s confidence, he almost leveled the tie with a spectacular overhead kick only to see his clean connection send the ball narrowly over.

Juventus set the pace – this was their home and their rules, after all – but how Alvaro Morata missed a free header no more than six yards out with seconds left on the clock will leave him and his team-mates in bewilderment long after the final whistle. 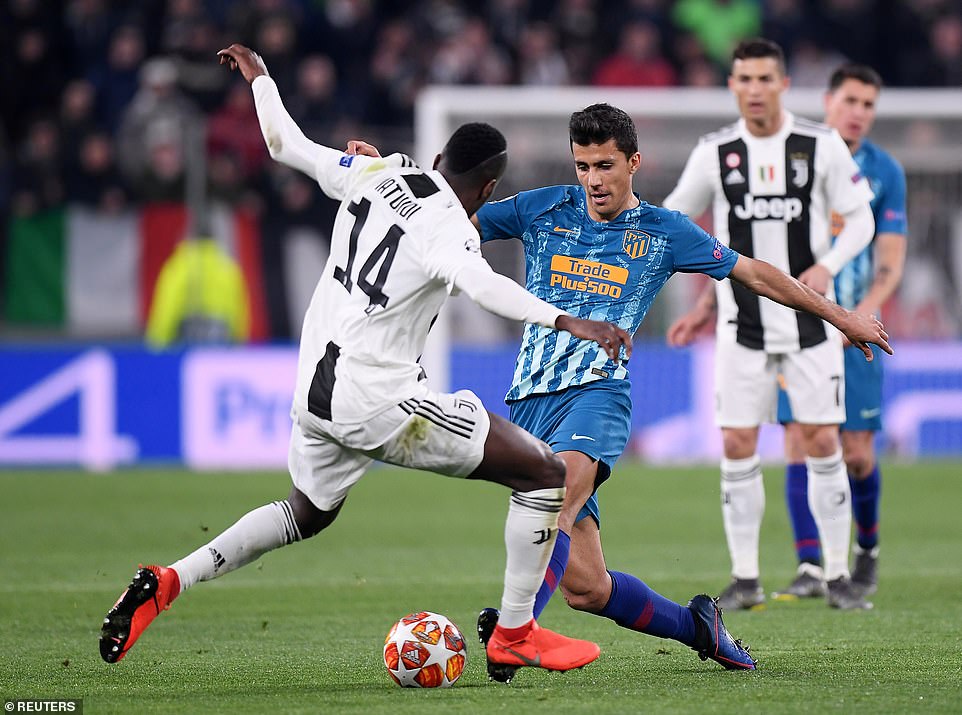 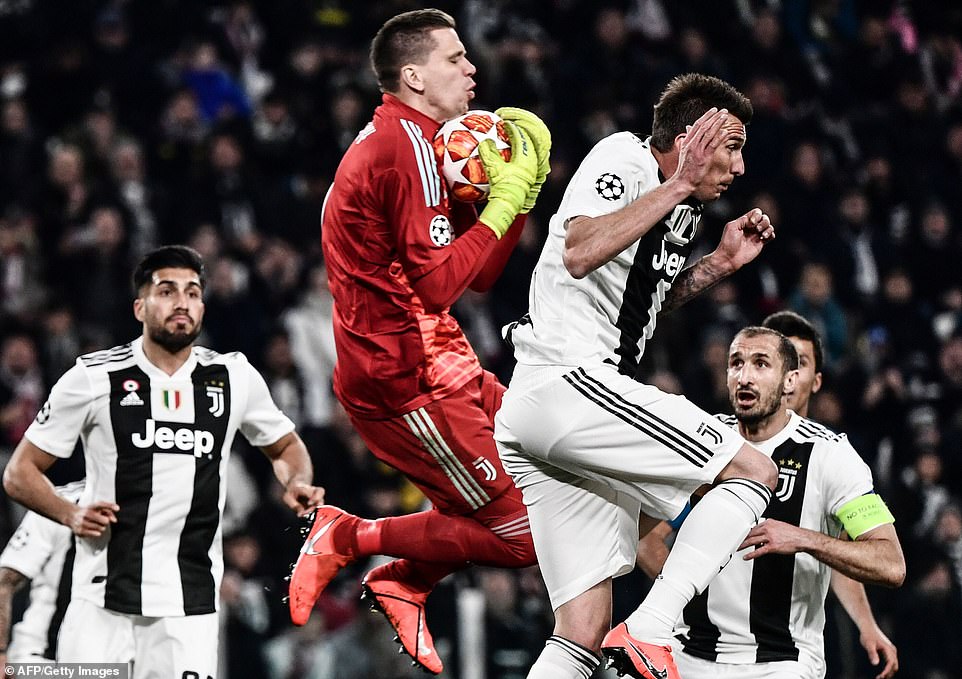 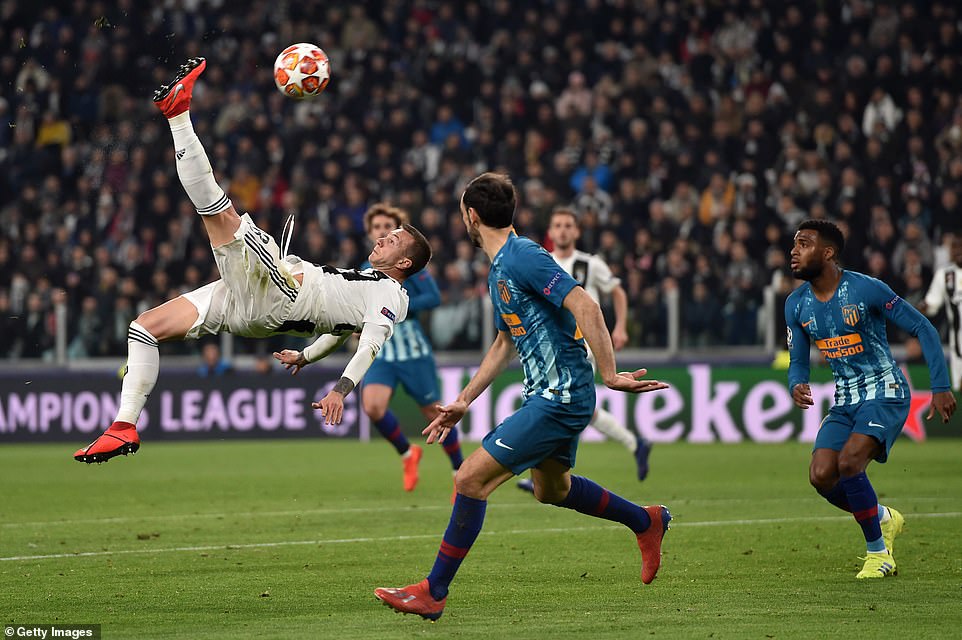 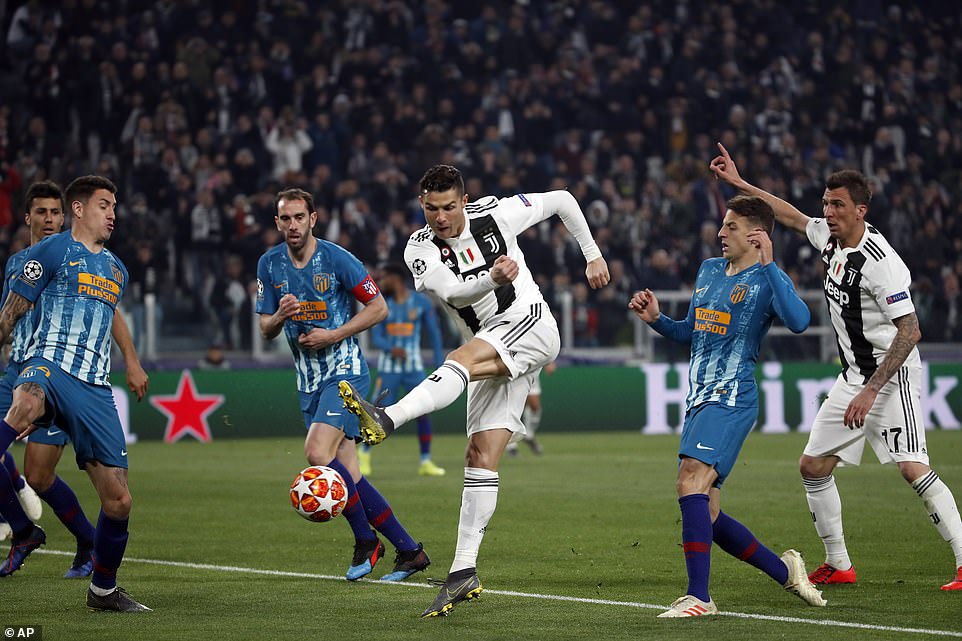 The ball came in from the right from Koke and Morata found a rare section of space between Chiellini and Joao Cancelo, but butchered his header to the frustrations of his manager, who was left apoplectic in his technical area.

The interval did Juventus no harm, they emerged rampant once more, starting with far more purpose. One became two as Ronaldo again put his head to good use, connecting with a wicked delivery by Cancelo wide on the right.

Oblak got a firm hand to it from close range but Kuipers looked at his watch and signaled that the ball had indeed crossed the line. Make it 24 in 32 against Atletico.

It took Simeone’s side blowing their lead before they actually started to resemble the side that impressed so many in the first leg. Thomas Lemar was hooked, a poor night’s work although he was not alone, and suddenly Atletico began to string one, two, three, four passes together.

Juventus lost the bite in their attack soon after Atletico settled. The tie was level, the hard work had largely been done but Massimiliano Allegri’s men were going for the jugular. They wanted this to turn into a bloodbath. 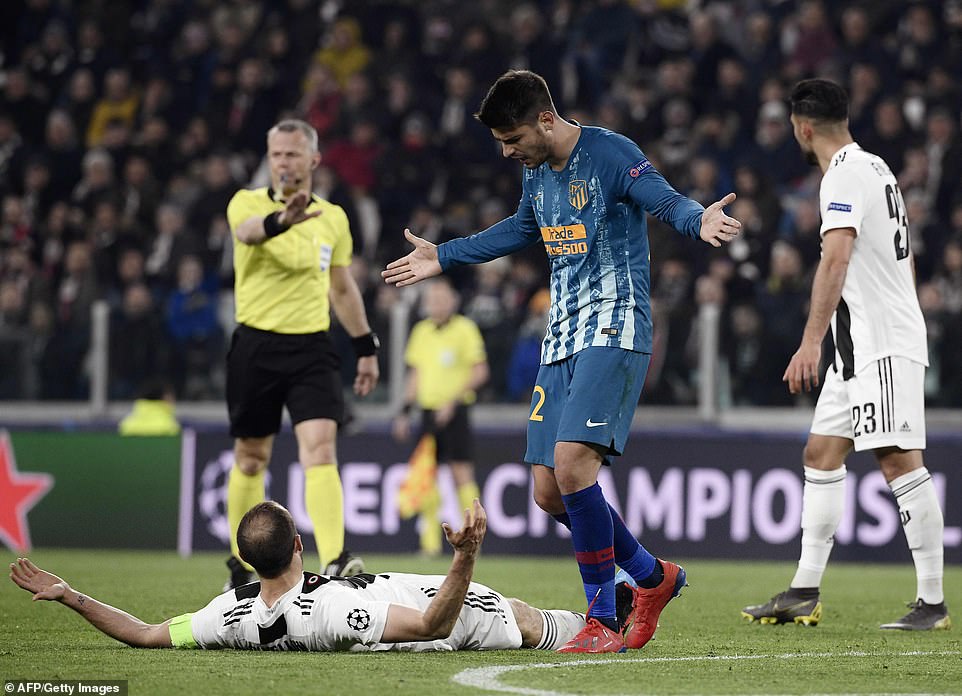 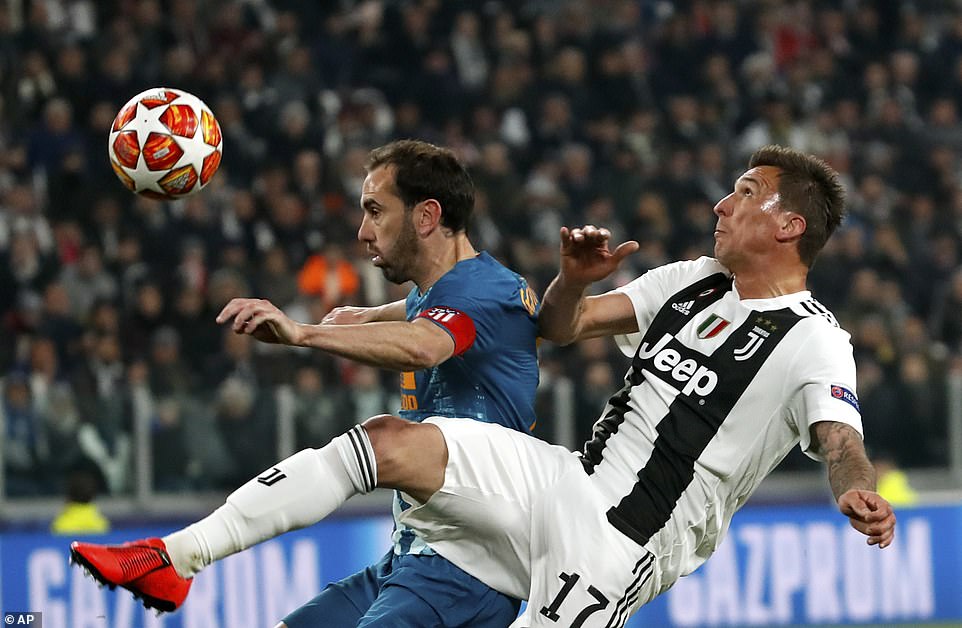 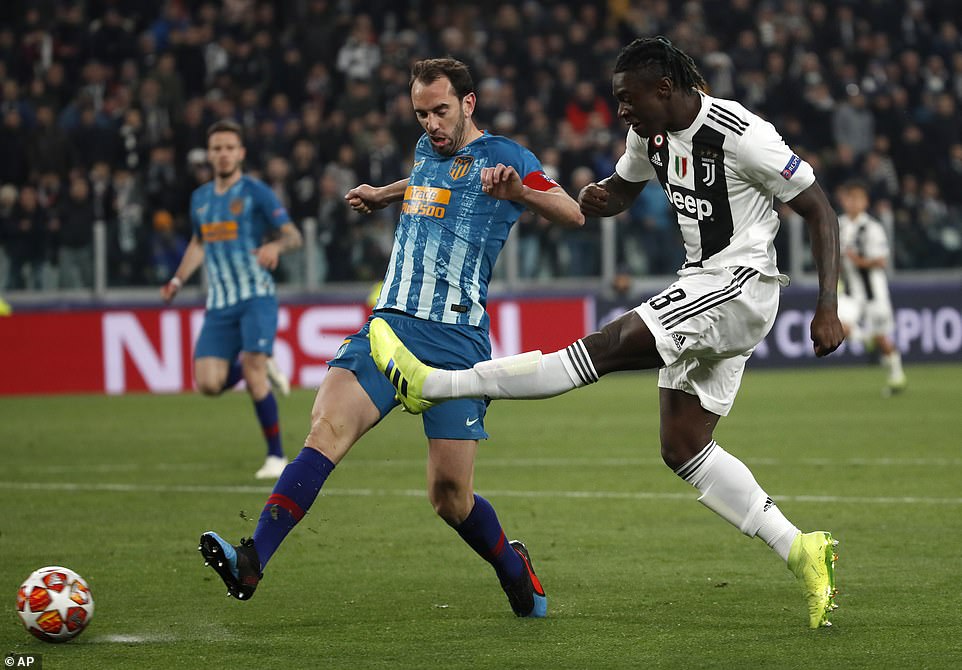 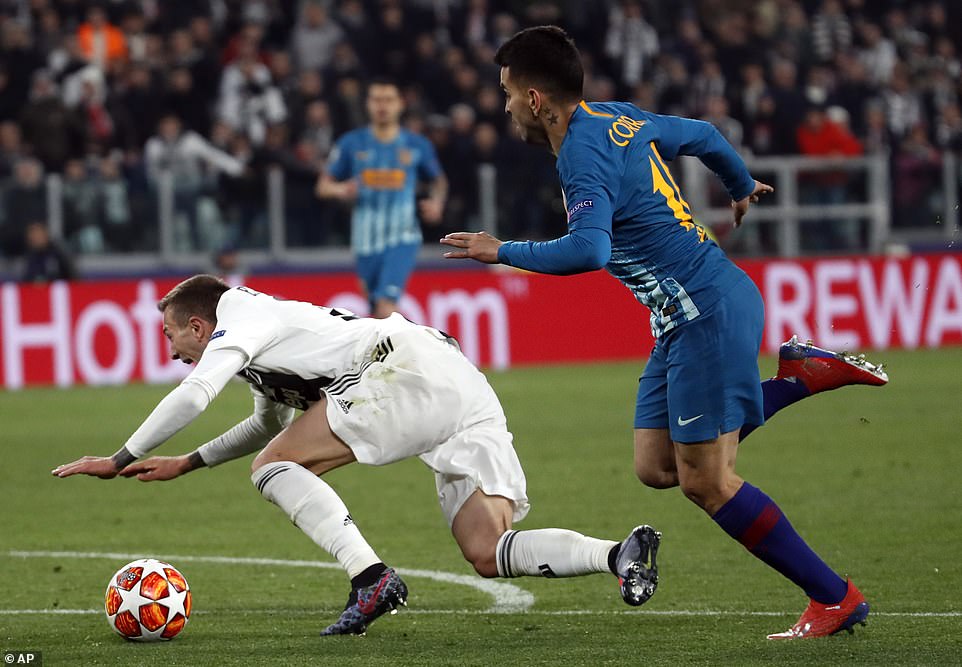 Off went full-back Leonardo Spinazzola and on came Paulo Dybala, shunned from the off by his manager as his future remains a constant source of debate for the club’s supporters.

Atletico were crying out for the skullduggery of Diego Costa. This was too easy for Leonardo Bonucci and Chiellini. Morata is a different proposition, granted, but lacking a focal point, it quickly turned into a long evening.

Then came the drama. The late, late drama. Bernandeschi weaved his way into the box, was hauled down and the referee needed no time to think. Certain penalty. The look on Simeone’s face told its own story. His side’s dream was, once again, ruined by a certain Portuguese.

This was a night written for Ronaldo. A deep breathe out, his cheeks moving as fast as his manager’s feet on the touchline and he converted as he has done so many times over the years.