Wayne Rooney has accused Sam Allardyce of allowing him to be “battered” and being responsible for what the England captain considers some of the more unjust criticism he can remember during his 13 years with the national team.

Rooney, who revealed his dissatisfaction about not getting the midfield role he craves at Manchester United, believes he is still suffering from Allardyce’s remarks about him being given carte blanche to play “wherever he wants” for the national team and the perception it left that England’s record scorer was being afforded the kind of special privileges that had never been given to anyone else. 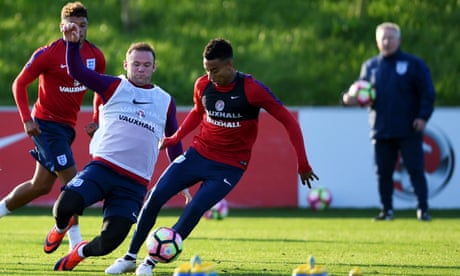 Allardyce, it emerged, had accepted it was the wrong thing to say, apologising to Rooney on the flight home from the 1-0 win in Slovakia last month, but the player believes he was “slaughtered” as a direct consequence.
Rooney’s irritation was still evident as he looked ahead to Gareth Southgate’s first match against Malta on Saturday and talked of the previous manager with a notable lack of fondness.
Unlike many of the players, Rooney has not spoken to Allardyce since the manager’s unceremonious departure, or even exchanged text messages.

Rooney’s annoyance stems from the fact it created the impression he might be choosing the tactics or even influencing team selection – “which couldn’t be further from the truth” – and the episode has left him believing Allardyce needed to give more thought to his public pronouncements.

“That’s part of being involved at this level,” Rooney, a veteran of 116 caps, said.

“He knew he made a mistake. He said that to me on the plane home. He understood that quite early and unfortunately he doesn’t have the chance to rectify that now.

“Sam came out and said I play where I want.

“I played exactly to instructions, and what was asked of me. I’ll play wherever the manager wants me.

“I don’t pick myself, I haven’t ever picked myself.

“I didn’t come in and say: ‘I want to play here or there.’ I played where I was asked to play. That was a big misunderstanding and I seemed to get slaughtered for it. I suffered from that.

“I got battered in many different ways when I felt it was actually a decent performance.

“It was over the top. I played in deep midfield and I thought, being honest, I actually did quite well, especially in the second half.

“I helped control the game. I turn up like every other player, ready to play and, if selected, I will play hopefully how the manager wants me to play, and that’s it.

“I played the role I was asked to play, played to instructions and that was it really. But it has all blown up.”

In a far-reaching interview, Rooney addressed questions about his deterioration in form, his removal from the United team under José Mourinho and the widespread suspicion that, approaching his 31st birthday he may be suffering from burnout after a career that started when he was 16.

Rooney accepted he deserved to lose his place at Old Trafford and, admitting he had lost the pace that once helped make him such a feared striker, he made it clearer than ever before that he believed he should be playing in midfield at this stage of his career.

“I have heard a lot of people talking about transition – well, let me do it. If that is what’s going to happen, let me do that.

“I feel I am not being given a chance if that is the way I want to go in my career to expand it.

“I am not being given that chance to go from there to there [attack to midfield]. It is all right talking about your career, saying you can extend it by doing this and that, but you need to be given the chance to do it.”

His problem on that front is that Mourinho has stated he sees him only as a front player and, though Rooney insisted he would accept the manager’s thinking, he also said “there will come a time, if I’m not playing, I might have to be a bit more selfish in terms of where I want to play and making that clear”.