Wayne Rooney is highly unlikely to leave Manchester United next week and has been left surprised by José Mourinho’s claim he could do so, though the striker is set to depart the club in the summer.

Rooney is determined to try and see the season out, so unless United actively tell him he can depart or there is lucrative offer last-minute offer from China’s Super League before their window closes on Tuesday, the striker will remain at Old Trafford. 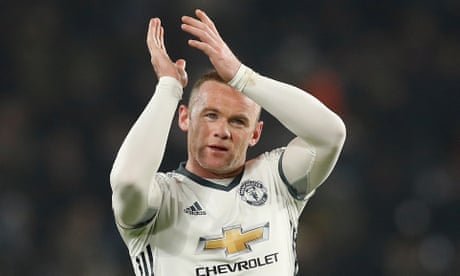 Mourinho’s comments he could not guarantee Rooney would still be a United player beyond 28 February caught him and his camp unawares as he has no wish to do so. On Tuesday, when asked about Rooney’s future, the manager said: “You have to ask him. Of course I can’t guarantee he will still be here next season. I cannot guarantee that I’m here next week, how can I guarantee that a player is here next season? What I can guarantee is that, if one day Wayne leaves the club, it is not because I want him to leave the club.

While this bemused the captain, he is unhappy at his lack of regular starts under the manager and unless this situation vastly improves before the season ends he will depart in the close season. There have been explanatory discussions between Paul Stretford, Rooney’s agent, and Tianjin Quanjian, who are coached by Fabio Cannavaro, but these have amounted to no material offer.

“We did make an approach for Rooney,” Cannavaro told Tianjin TV. “It was just a chat because he simply doesn’t suit our style of play. No further discussion was necessary.”

It is thought that SIPG and Shenhua, the two Shanghai-based clubs, do not currently have an interest in Rooney and so his options in China are limited.