Ruiz’s gets into Exclusive Upset Club

Move over, Iran and Buster.

And if you wouldn’t mind, Antonio and Juan Manuel, please make room for another visitor.

Because when Michael Griffin waved his arms Saturday and ended Anthony Joshua’s choreographed ascension to galactic preeminence, he simultaneously made a six-pack of their quintet.

And while he was at it, he unceremoniously linked “AJ” with Thomas Hearns, Mike Tyson, Michael Moorer, Roy Jones Jr. and Manny Pacquiao.

In the 42 years since my first TV fight – Ken Norton vs. Duane Bobick in 1977 – there had been precisely five high-profile endings that, to me, stood head and shoulders above their peers in shock value.

All had elements that went beyond a garden-variety upset.

In some, an undervalued underdog shows from the opening bell that he’s better than advertised. In others, a significant favorite begins a fight in dominant fashion and looks primed for a career-enhancing win, only to have the momentum blunted by a paradigm-shifting shot.

First on the list comes a Saturday night that I still clearly remember, even 31 years ago this week.

I’m among the world’s biggest “Hitman” fans, so by the time June 1988 arrived I was in a good place.

Marvin and Ray had been off the radar for a year, which left the middleweight domain – finally – under the thumb of Hearns, who’d won/defended titles in a three-year stretch since losing “The War.”

He strafed Barkley to the head and ripped him to the body early, and I still recall turning to my then-girlfriend at the end of the second round and suggesting it was as good as I’d ever seen him look.

Needless to say, my tune soon became a sad one.

And come to think of it, she didn’t make it another year either. 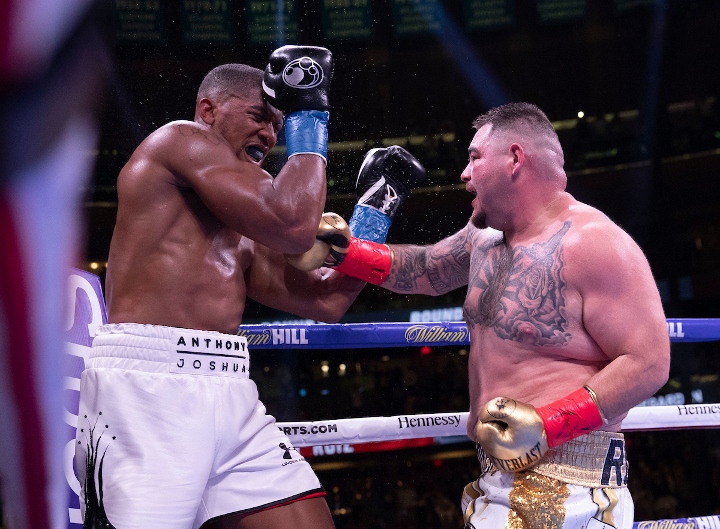 If the shocking result from Midtown reminded me specifically of any fight, it was this one.

Tyson, like Joshua, was the darling of the odds-making set, and his trip to the Tokyo – like AJ’s to the Garden – was the next step in transforming the menace into a global brand.

And unlike each of the other upsets, this was no one-punch phenomenon.

Douglas, like Ruiz, won most of the moments of meaningful competition before finally putting his prohibitively favored foe out of his misery.

It deservedly remains the standard to which every new upset is compared.

Though he’d been competitive and brave against Evander Holyfield three years earlier, Foreman had done precisely nothing in the intervening time – including losing to Tommy Morrison – to make anyone believe magic was about to occur.

He was thrashed for nine rounds, beaten into a puffy mess and was about nine minutes from realizing the mistake he’d made in tangling with an unbeaten and talented foe who was 19 years younger.

Until he prompted Jim Lampley into a call that still raises the > on my arms.

I’ll have the argument with anyone who cares to entertain it. In the years in which I’ve been a big fan, a prime Jones is the best I’ve ever seen. He was blindingly fast. He had one-punch KO power.

He’d narrowly beaten Tarver six months earlier and looked ready to better his own initial result in the rematch when unfettered with the struggle to drop from heavyweight to 175.

When Tarver shot his mouth off during Jay Nady’s instructions, I was sure he was doomed. And after Jones appeared the boss through the first three minutes, I was perhaps three times more certain.

To this day, it’s the left hand that took him out that makes me realize anyone can lose.

That said, had you asked me about Marquez’s chances after the fifth round of their fourth fight, I’d have put them right up there with any one of Tyson’s pre-Buster heavyweight challengers.

But his will was surely still there.

And while I’m very happy that Manny ultimately got up and resumed his winning ways a few months later, I swear for a few seconds I’d seen a man killed with a single punch.

NOTE: Fights previewed are only those involving a sanctioning body’s full-fledged title-holder – no interim, diamond, silver, etc. Fights for WBA “world championships” are only included if no “super champion” exists in the weight class.