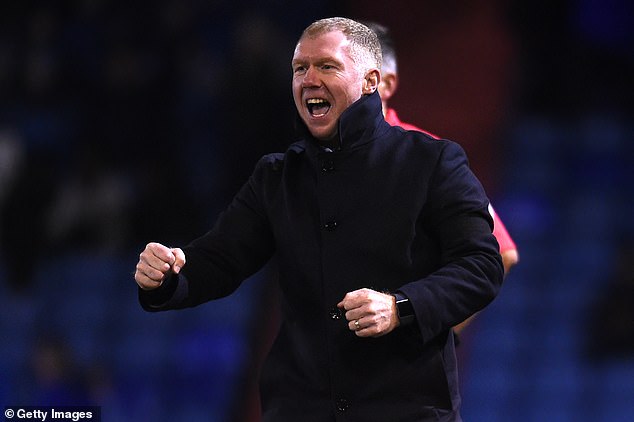 Paul Scholes kicked off his managerial career with an emphatic win – thanks in part to a man named Jose.

But as he swapped the TV studios for the dugout, man-of-the-match Jose Baxter was the name on everyone’s lips as the Scholes era began with a thumping 4-1 victory for the Latics on Tuesday night.

Former Everton man Baxter was on hand to slot home from 12 yards out at the end of a scrappy first half for the opener.

Another Scouser, on-loan Wigan man Callum Lang made it two after the break before Bevis Mugabi pulled one back almost instantly for the visitors – but late goals from Mohamed Maouche and Chris Missilou got Scholes off to a flyer.

While he may not have been a fan of his playing style, there appeared to be a nod to Mourinho’s dress sense when Scholes emerged from the tunnel all in black with a long black jacket that looked like it had come straight from the Portuguese’s wardrobe. 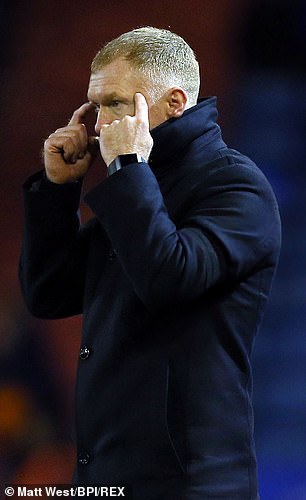 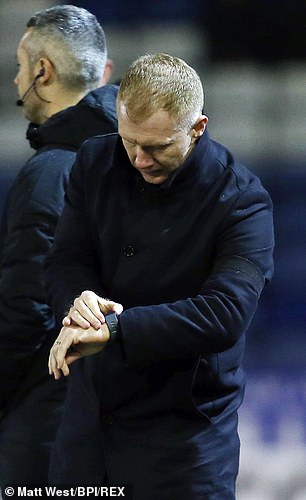 The 44-year-old was given a standing ovation from a healthier than usual home crowd, who immediately launched into a chorus of ‘Paul Scholes’ blue and white army’. It would have been music to Scholes’s ears, although a chant of ‘We hate Man U, and City too’ moments later may not have been.

Scholes stood on the edge of his technical area for ready for the opening exchanges, with arms folded and collar upturned. However, straight from the kick-off Yeovil striker Alex Fisher clattered into Oldham full-back Tom Hamer and a four-minute delay ensued, with both men on the turf.

One of the main questions surrounding Scholes’s willingness to take the gig at his boyhood club was over how he would deal with alleged interference from the boardroom. Scholes was adamant that he, and not owner Abdallah Lemsagam, would be picking the team. 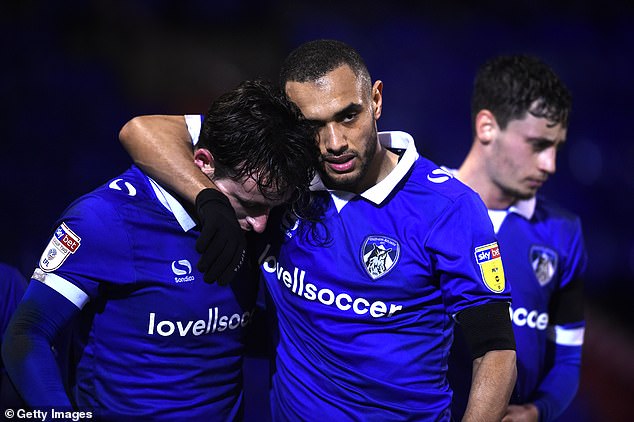 We did not have to wait long for proof of that when, on 11 minutes, former Brighton man Rob Hunt replaced Hamer. According to sources, Hunt was barred from the starting XI for having the temerity to turn down a move to Lincoln City for less money, but Scholes had no hesitation in introducing him here.

There was a let-off with the first action of note on 14 minutes when, after a scrappy opening, Yeovil’s Jake Gray smashed a volley against a post, much to the frustration of the 56 hardy souls who had made the long journey north in the Chadderton Road End.

Reminders that this was not Old Trafford were all around. The advertisement boards extolled the virtues of the Blue Tiffin Curry House rather than Gazprom and the standard of football in the first 30 minutes left plenty to be desired.

However, there could be no disputing Scholes’s influence off the field. 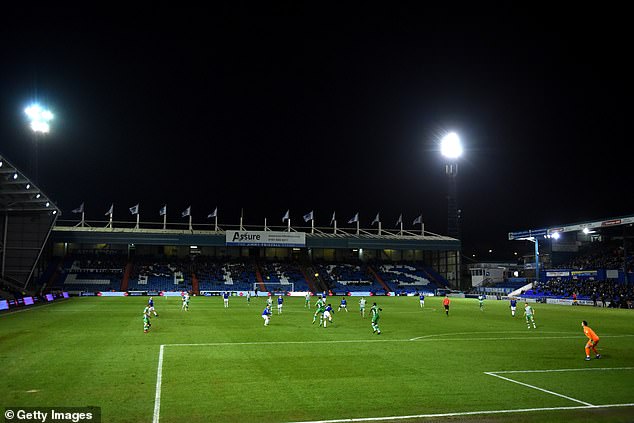 Oldham’s pre-match press conferences usually have an attendance of three – the club website, the local radio station and a student from a Manchester-based journalism course.

On Tuesday, no fewer than 43 members of the press converged Boundary Park for Scholes’s unveiling. Such was the interest that the event was moved from the compact press room under the main stand to the comparative luxury of the fans’ match day bar, which is essentially a cabin on stilts.

Scholes, as he so often did in his playing career, took it all in his stride, although he did admit to a few sleepless hours as he geared up for this touchline debut.

It was more of the same in his first programme notes. Scholes opened by stating ‘I couldn’t think of a better club to begin my journey with’ before reverting to humble mode. 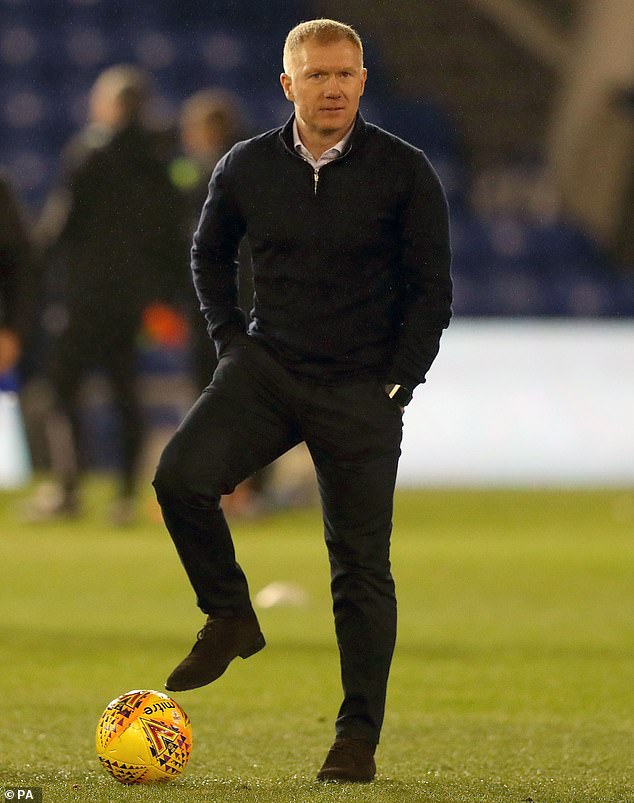 ‘This isn’t about me,’ he added. ‘It’s about the players, the staff, the fans and everyone associated with Oldham Athletic.’

Back on the field came the first sign when Oldham lined up for a corner with an England-style love train of four players bunched on the edge of the area, rather than the middle.

Whatever the intention, the result was winger Gevaro Nepomuceno hammering his shot onto the roof of the stand. Oldham got better and the first goal of the Scholes era came in the fifth minute of six added on at the end of the first-half when a delightful flick from winger Johan Branger-Engone found Nepomuceno who then teed up Baxter in acres of space to curl into the far corner from around 12 yards out.

Fresh from a Scholes team talk, Oldham went 2-0 up when Lang nodded in a Nepomuceno cross from close range on 51 minutes but moments later Yeovil were back in it thanks to Mugabi, who scrambled home a free-kick.

With two minutes to play French midfielder Maouche ended the contest with a beauty from outside the area that his manager would have been proud of and seconds later Missilou made it four to cap a perfect start.

The majority of the 3,868 went home happy, along with their new manager, who only had 15 minutes to drive at the end of a satisfactory evening. 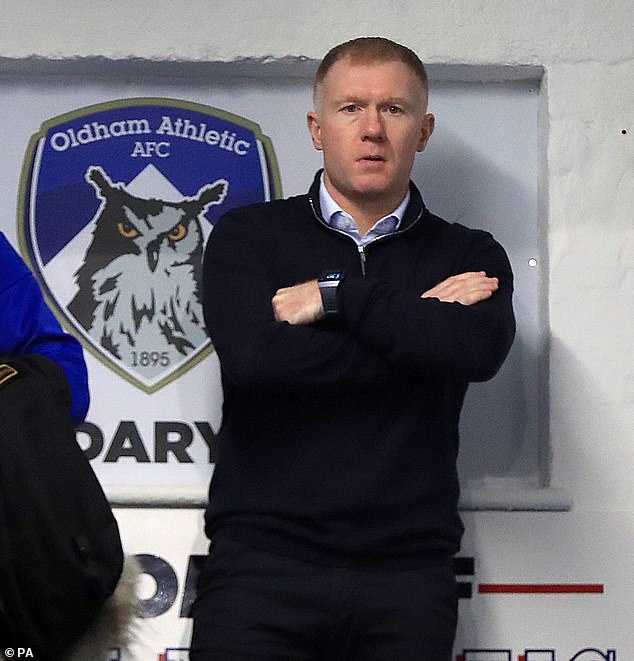