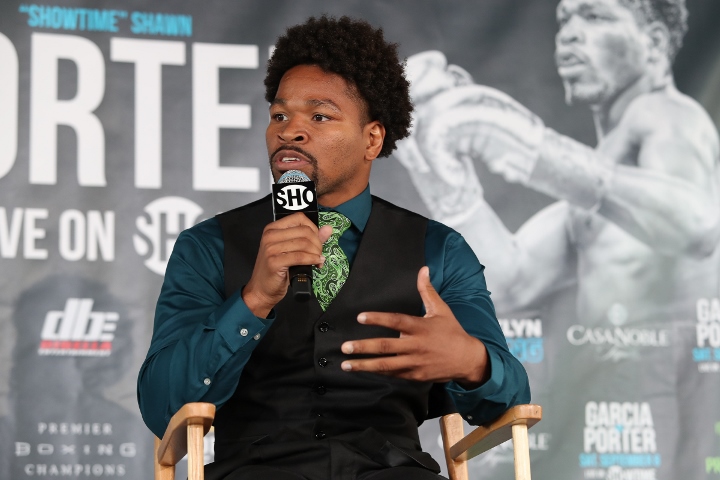 From the moment he was being groomed as a rising welterweight, Shawn Porter has consistently called out his divisional peers.

Some fights have come along, but often at the expense of the Akron, Ohio native having to grow stale on the sidelines awaiting such opportunities to materialize. Following his win over Danny Garcia—one of the many welterweights he’d pursued for the past few years—Porter finally feels like he’s in the driver’s seat.

“The network deals are nice, but all the welterweights under (Premier Boxing Champions) benefit from that,” Porter (29-2-1, 17KOs) explained to BoxingScene.com.

“But I got this (World Boxing Council welterweight) belt now. The champs got away with avoiding me, but you can’t duck a shot at the title.”

Porter will put that very strap on the line in a March 9 title defense versus Cuba’s Yordenis Ugas (23-3, 11KOs) at Dignity Health Sports Park (formerly StubHub Center) in Carson, California. The scheduled 12-round main event will air live on Fox in primetime.

For Porter, it’s a second tour as a welterweight titlist, although his first run lasted just eight months and one successful title defense. Interestingly, his reign ended at the very same arena where he faces Ugas, when he dropped a competitive 12-round decision to then-unbeaten Kell Brook in Aug. ’14.

Just six fights have followed, largely due to forced gaps in between fights. Porter had to wait more than a full year for a long-coveted crack at welterweight titlist Keith Thurman–dropping a razor-thin decision in their June ’16 thriller—and another 10 months from his Nov. ’17 title eliminator win over Adrian Granados and his eventual vacant title victory over Garcia last September at Brooklyn’s Barclays Center.

Ugas appeared on the very same show that saw Porter become a two-time welterweight titlist, earning his place in line as the mandatory challenger with a 12-round win over Cesar Barrionuevo. The win was Ugas’ eighth in a row—all coming in his unexpected ring return in 2016 following back-to-back losses and a two-year layoff.

Given the long road that the 32-year old from Cuba—who relocated to Miami and is now based out of Las Vegas—has traveled in getting to the title stage, it’s only fitting that his first career title fight comes versus a defending champ who can empathize with his struggle.

“You definitely have to appreciate a guy like Yordenis,” acknowledges Porter.

“He’s had a great comeback, he’s earned this title shot and it’s why he has nothing but my undivided attention for our March 9 fight.”

With a win, of course, Porter will be in an even greater position to check off some names from his potential wish list.

It will also allow him to enjoy the role of interested observer one week later when IBF titlist Errol Spence faces lightweight champ Mikey Garcia—who moves up in weight—in a March 16 Fox Pay-Per-View battle of unbeaten pound-for-pound entrants.

“I’ve had my same short list of fighters I’ve always wanted to face ever since regaining this title—a rematch with Keith Thurman, and unifications with Errol Spence and Manny Pacquiao,” explains Porter.

“Of course, right now it’s all about Yordenis Ugas and I’m not even going to speculate beyond that.

“What I will say, once we get this win, then we can look at the other top welterweights. It will begin with March 16 and (Spence vs. Garcia) and we will go from there.”