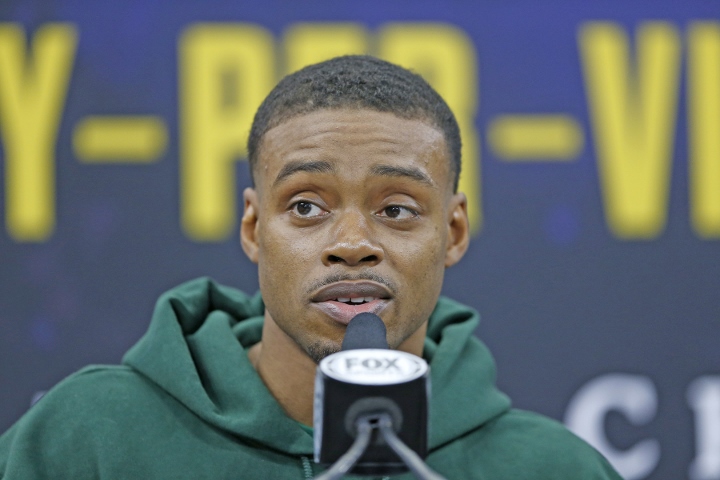 Errol Spence Jr. isn’t the least bit concerned with what anyone else thinks about how his fight against Mikey Garcia will unfold.

“No, it don’t bother me at all,” Spence said during a press conference Wednesday.

“I mean, they’re legends. They’re entitled to their own opinions. I look up to them, I mean their fights and things like that. They were great fighters and great boxers and I respect their opinions. If they think that, you know, that’s their opinion. That’s it.”

The 29-year-old Spence (24-0, 21 KOs), of DeSoto, Texas, is consistently listed as a 4-1 favorite against Garcia, who has won world titles in four weight classes. The 31-year-old Garcia (39-0, 30 KOs), of Moreno Valley, California, stands four inches shorter than the 5-feet-10 Spence and has moved up from the lightweight limit of 135 pounds to 147 for this showdown.

The official odds notwithstanding, Garcia appreciates the support of legendary fighters.

“Well, you know, it shows that people who’ve done it in the ring,” Garcia explained, “the ones who are legends, like Sugar Ray, and they picked me or they see me coming out with that victory, it just gives me that extra motivation.

“You know, now I’ve gotta prove to everybody that I’ve got what it takes to win this fight.

“Against what everybody else says, whatever every media expert says, they’re not the ones getting in the ring. They’ve never been in the ring.

“But the ones who have will be picking me and that’s what it’s about, you know? I’ve gotta go in there Saturday night and show them why I chose to pick on this fight and why I wanted this fight.

“You know, I’m here to make history and this is the fight that’s gonna do that for me.”