It is a time for Tottenham to dream. The London club completed an impressive Champions League elimination of Borussia Dortmund on Tuesday night, winning 1-0 at Signal Iduna Park for a 4-0 aggregate triumph and now the attention has turned towards the quarter-final draw on Friday week.

Toby Alderweireld is not one to get carried away but even he could revel in the possibilities. What if Spurs were to be drawn against Ajax, his old club, whose thrilling young team have progressed at the expense of the holders, Real Madrid? Spurs have three other former Ajax players in their ranks – Jan Vertonghen, Davinson Sánchez and Christian Eriksen. It would be an emotional reunion for each of them. 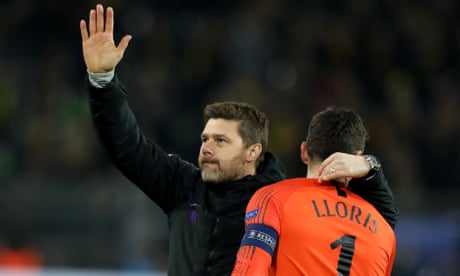 Yet the bigger question concerns where Spurs might play the home leg of the quarter-final. Could it be in their new stadium? It is the fervent hope of everybody at the north London club. Mauricio Pochettino said as much after the Dortmund game and, for Alderweireld, that setting would really set the pulses racing.

“I know our fans are doing a massive job for us and even the last London derby against Arsenal at Wembley [last Saturday], the atmosphere was incredible,” Alderweireld said. “Imagine that at the new stadium. I think there won’t be another club in the world like this. It would be massive to be in the new stadium for the quarter-final. Even if we never played a game there, it will be like our home.”

Pochettino said after the victory in Dortmund that, having spoken to the chairman Daniel Levy, he was optimistic Spurs would be playing the quarter-final at their new stadium but, as has been the case throughout the saga of the build, there are other moving parts.

Spurs will not open the stadium with a midweek fixture because they present organisational and safety challenges and so it must be a weekend match. Brighton on Sunday 7 April has been targeted but that fixture will be rescheduled should the Seagulls reach the FA Cup semi-finals at the expense of Millwall. Spurs’s next home game would be against Huddersfield on Saturday 13 April but the two legs of the Champions League quarter-finals are set for 9-10 and 16-17 April. That means the club would need to be drawn at home for the second leg.

Then there is the attitude of the Premier League, which has backed Spurs throughout a difficult process but it feels it is approaching ultimatum time. The league would like Spurs to show a readiness to move in for the Brighton game – to play their final five matches of the domestic season at the new stadium. 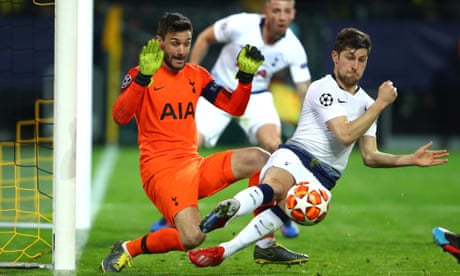 But if Brighton were to beat Millwall, which would mean further midweek rescheduling and possibly another game at Wembley, the Premier League might take a sympathetic view. Uefa’s attitude is understood to remain relaxed over where Spurs play their Champions League ties.

It is all going on at Spurs, with Pochettino handed a two-match touchline ban on Wednesday morning for his confrontation with the referee, Mike Dean,after the 2-1 defeat at Burnley on 23 February. Pochettino will be in the stands for Saturday’s visit to his former club, Southampton, and the trip to Liverpool on 31 March. He will be allowed to give team-talks in the dressing-room before the game and at half-time.

Pochettino was told of the sanction on Tuesday, in the buildup to the Dortmund tie, and was fuming about it. He was already at odds with the Football Association and Premier League over the fixture scheduling that had allowed Dortmund an extra day of preparation time for both legs of the Champions League tie. Pochettino has seen problems and conflict at various turns this season and he has been increasingly outspoken.