José Mourinho has one regret, and it was reinforced last Thursday night when his Tottenham team continued their free-scoring start to the season with a 3-0 Europa League home win against the Austrian side Lask.

If only the fans had been there to enjoy it and, indeed, the preceding eight matches in which Spurs had racked up 28 goals.

The 1-0 home loss to Everton on the Premier League’s opening weekend seems a long time ago.

“I’m sad with the empty stadiums and against Lask, I had an even worse feeling than in the Premier League,” Mourinho said.

“Maybe because of the way the stadium was – all of the orange logos of the Europa League all around, the beautiful big screens. I think the Tottenham fans have a little bit in their DNA for quality players, attacking players, attacking style. They would enjoy to be here to watch it. It would be really great fun.” 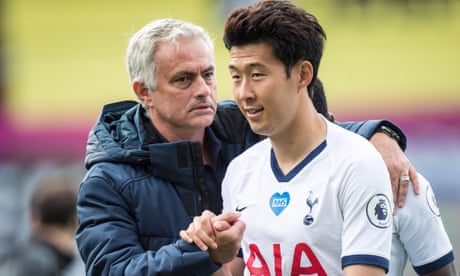 Plainly, something stirs in Mourinho when he sees the Europa League’s hoardings, the memories flooding back of how he led Manchester United to the trophy in 2017 and, also, Porto in 2003 when it was called the Uefa Cup.

He may or may not have mentioned it over recent weeks but his record in the competition reads played two, won two.

Otherwise, Mourinho is having fun and, as he looks ahead with optimism to Monday night’s game at Burnley, it is all a far cry from last season, when he joined in November, injuries stretched his squad, the gaps were visible – particularly in attacking areas – and, more often than not, the football was functional at best.

In 26 league games, his team scored 43 goals as they scrapped to a sixth-placed finish. In five this time out, they have plundered 15.

Son Heung-min has seven of them (plus two more in the Europa League) and, amid the plaudits for his ruthlessness, Mourinho noted with approval how he could “play in different positions, make different angles to attack … even from the right wing position”.

Mourinho did not want to single out Son, who came off the bench to score the third against Lask.

He made the point that Harry Kane, who has five league goals plus five in Europe, would probably have done some damage had he featured or, maybe, it would have been somebody else.

Because after a transfer window that nobody had seen coming, especially after Daniel Levy, the chairman, forecast Covid-driven losses of £200m for the club over a 12-month period and went to the Bank of England to borrow £175m at an interest rate of 0.5%, Spurs have a depth of options in all areas.

The net spend on permanent transfer fees of about £61m did not include the loan arrangements for Gareth Bale and Carlos Vinícius, the latter of whom has provided cover for Kane and, according to Mourinho, an option alongside him.

“Carlos is the kind of player we were missing from the squad,” the winger Lucas Moura said. “He is a real No 9.”

Mourinho can choose in wide areas between Son, Bale, Moura, Steven Bergwijn and Erik Lamela. In attacking midfield, meanwhile, he has Tanguy Ndombele, Giovani Lo Celso and Dele Alli. All are fit and they are driving each other on.

“Which attacking player is not playing well?” Mourinho asked, to which the only answer could be Alli.

“Nobody,” the manager continued. “The way we are playing, I think it’s good fun to be an attacking player in our team.

“Last season I had lots of problems with no striking force, not even wingers or attacking players in some periods of the season, and now we have this amazing squad. Against Lask, with Uefa allowing everybody on the bench [12 players], I looked to my side and I had so many options.” 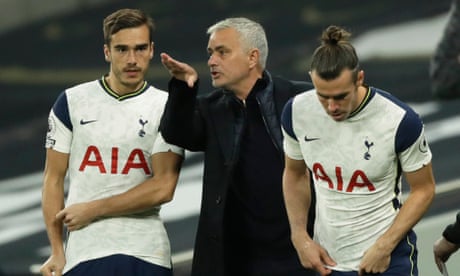 Does Mourinho feel that he is answering the critics who say he cannot play expansive, scoring football?

“It depends on the team,” he replied.

“They cannot say that about my Real Madrid team that scored 121 goals in the league [title win of 2012]. If they say that about the way to finish second with Manchester United [in 2017-18; 68 goals in 38 games] or last season to try to get a way to finish top six and to be in the Europa League, I think they are right.”

Mourinho obsesses about the balance of his Spurs team, about creating the platform for his attacking talents. Pierre-Emile Højbjerg is a pivotal figure, the holding midfielder having been signed, in part, to liberate Ndombele.

The Lask game represented Spurs’ only clean sheet but when Mourinho analyses the eight league goals conceded, he notes that six came from or directly followed set pieces (three were penalties).

To him, that is fixable and, in open play, his team have generally been well organised.

Given the upbeat mood, it is easy to forget that Spurs have yet to win at home in the league. But Everton apart, plus the last 10 minutes of the wild 3-3 draw with West Ham, the performances have been good.

What is clear is that when a team are creating and scoring, the cracks can be papered over.

The club’s support have something around which to rally – whether they are at the stadium or not.