The rescue operation to free the last of the 12 boys and their football coach from a Thailand cave could have been a disaster, divers have revealed, with water pumps draining the area failing just hours after the last boy had been evacuated.

Divers and rescue workers were still more than 1.5km inside the cave clearing up equipment when the main pump failed, leading water levels to rapidly increase, three Australian divers involved in the operation told the Guardian on Wednesday, in the first detailed account of the mission to be published.

The trio, stationed at “chamber three”, a base inside the cave, said they heard screaming and saw a rush of head torches from deeper inside the tunnel as workers scrambled to reach dry ground. 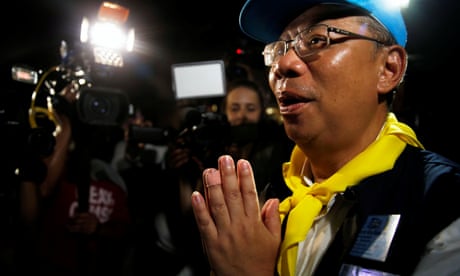 ‘The Great Escape’: newspapers around the world share joy of Thai cave rescue

“The screams started coming because the main pumps failed and the water started rising,” said one of the divers, speaking anonymously because he is not authorised to comment.

“All these headlights start coming over the hill and the water was coming … It was noticeably rising.”

The remaining 100 workers inside the cave frantically rushed to the exit and were out less than an hour later, including the last three Thai navy Seals and medic who had spent much of the past week keeping vigil with the trapped boys.

The boys of the Wild Boar football team were brought out in three daring rescue operations starting on Sunday morning. An elite team of 19 divers were involved in ferrying the boys and their 25-year-old coach the approximately 3.2km path from the muddy slope where they had been sheltering to the outside world.

The first four emerged on Sunday, the next four on Monday and then the final five about 8pm local time on Tuesday evening. The operation required the boys to learn to breathe using scuba masks and to traverse narrow, jagged tunnels.

During the final mission, as the three Seals and doctor were passed up the human chain of rescuers that had formed inside the cave, each section began cheering and applauding. The rescuers compared it to a joyful Mexican wave that continued until the entrance.

The rescuers in the daisy chain spent more than eight hours a day standing on a tiny patch of wet, muddy ground waiting for their turn to pass the boys along the treacherous path. “If one of those people doesn’t do their jobs properly, the stretcher falls,” one diver said.

The journey from chamber three to the cave entrance took about four to five hours initially, but was reduced to less than an hour after a week of draining and clearing the mud path using shovels.

The 12 boys, who wore diving cylinders and were each tethered to an adult diver, had to submerge themselves for much of the journey but were carried on bright red Sked stretchers whenever they entered patches of dry ground. Each one left the cave on these stretchers still wearing their breathing masks.

Much of last week was spent clearing the 1.5km path from chamber three to the entrance. When the Australian divers arrived on 30 June, “the complexity and scale [of the cave] was unknown”, said commander Glen McEwen, of the Australian federal police at a briefing on Wednesday.

The Australian divers, carrying 46kg of diving gear, were among the teams ferrying radios, air cylinders and other equipment into the third chamber.

“They did dive and as you can appreciate at that time there were no pumps in operation,” McEwen said. “So it was an unfriendly operation, it was narrow, it was flooded.”

The Australians were unable to go further because their gear was too large: going beyond chamber three required passing through a hole less than a metre wide.

The specialist cave divers and the boys wore smaller equipment such as rebreathers and tanks at their sides, rather than on their backs.

The divers compared parts of the journey to moving through the S-bend of a toilet. They said there were three main sumps on the path to chamber three, about 10 to 20 metres long, separated by up to 300m of dry ground.

McEwen said the Thai-led operation was the most complex the police had been involved with. “It’s amazing what a human being can do,” he said. “They were extraordinary people doing extraordinary things.”

It emerged on Wednesday morning that Richard Harris, the south Australian doctor who gave the boys the all-clear to be extracted starting on Sunday, learned soon after he emerged from the cave for the last time that his father had died.

Major Alex Rubin, from the Australian Defence Force, said on Wednesday Harris was “personally one of the most professional doctors I’ve ever met”.

“His unique skillsets as a specialist doctor and also his extensive experience as a cave diver was quintessential to the success of this operation, which was led very well by the Thai authorities,” Rubin said.

“[He] is an extremely humble man and the amount of weight and pressure that was put on him, I have the utmost respect for everything he’s done.”

He added: “The children who went through this ordeal in the cave were heroes in their own right and the Thai Seals themselves went above and beyond. I would class them as heroes.”

Doctors treating the rescued boys and their coach in the nearby city of Chiang Rai said on Wednesday that each had lost an average 2kg during the ordeal but were generally in good health.

The parents of the first four boys freed will be able to meet them on Wednesday provided they wear protective suits and stand 2-metres away. Relatives of the nine others rescued will need to see them through a window until doctors can rule out infections.