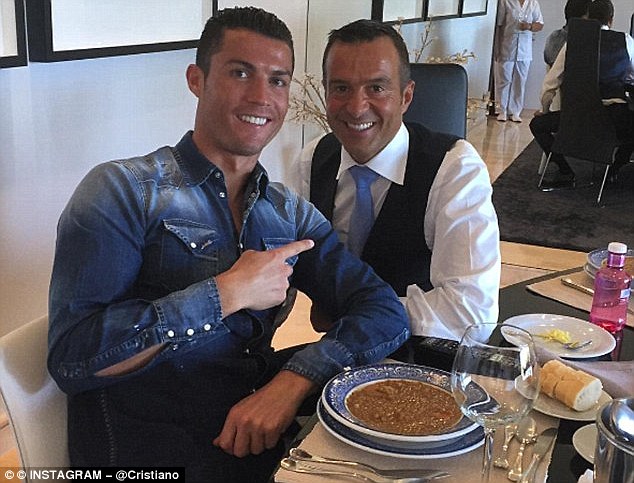 Cristiano Ronaldo’s agent Jorge Mendes, right, will receive £10.6m for his part in the superstar’s £100m transfer from Real Madrid to Juventus

Cristiano Ronaldo’s astonishing £100million transfer from Real Madrid to Juventus will lead to a £10.6m payday for his agent, the Serie A club have confirmed.

Jorge Mendes made a proposal to Juve when selling them full-back Joao Cancelo from Valencia last month – and the club subsequently made a £88m offer to Real.

In addition to the agent’s fee, Ronaldo’s former clubs Sporting Lisbon and Manchester United will share a total of £4.4m, making the deal worth more than £100m.

Sponsors Fiat agreed to shoulder the burden of his £26.6m-a-year wages, helping to ease money fears but the total cost to club will be £310m over four years. 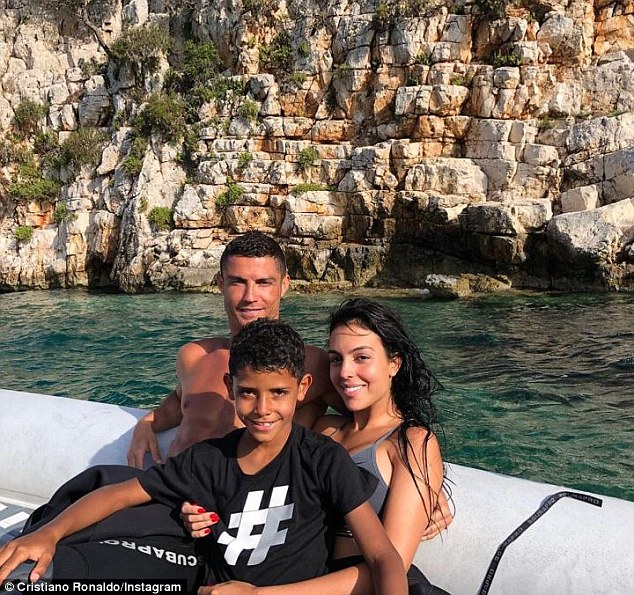 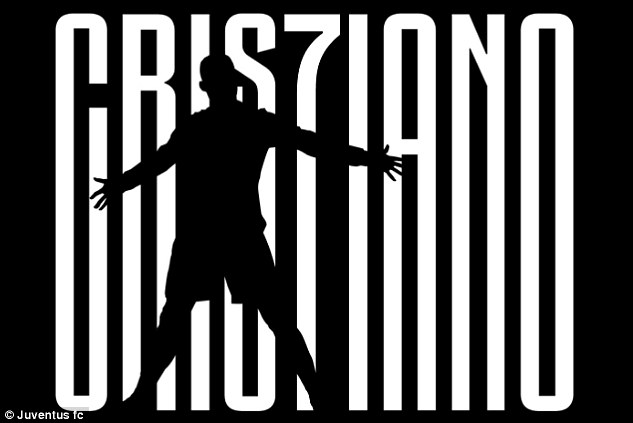 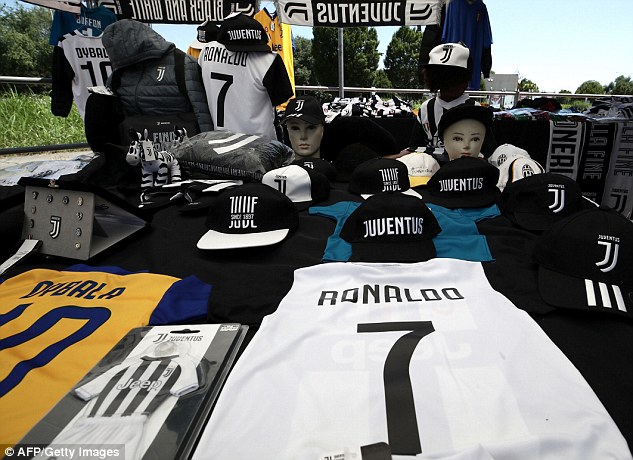 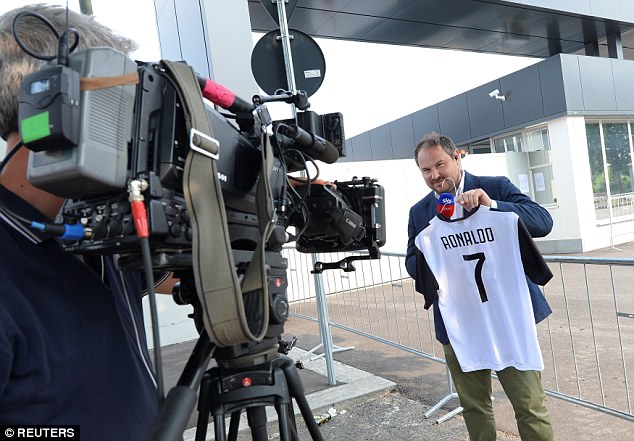 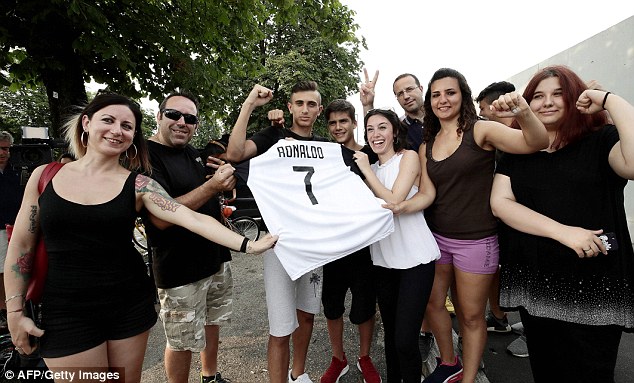 Ronaldo met Juventus club president Andrea Agnelli on Tuesday afternoon in a hotel in Greece before agreeing the four-year deal worth an estimated £500,000 a week.

It is believed that the transfer was finalised at the meeting in Greece, where Ronaldo is currently on holiday with his girlfriend and family.

In a statement, the club admitted that they had granted Ronaldo his wish to leave the club.

It read: ‘Today, Real Madrid wants to express its gratitude to a player who has proved to be the best in the world and who has marked one of the brightest times in the history of our club and world football.

‘Beyond the titles won, the trophies collected and the triumphs achieved on the pitch during these nine years, Cristiano Ronaldo has been an example of dedication, work, responsibility, talent and improvement.’ 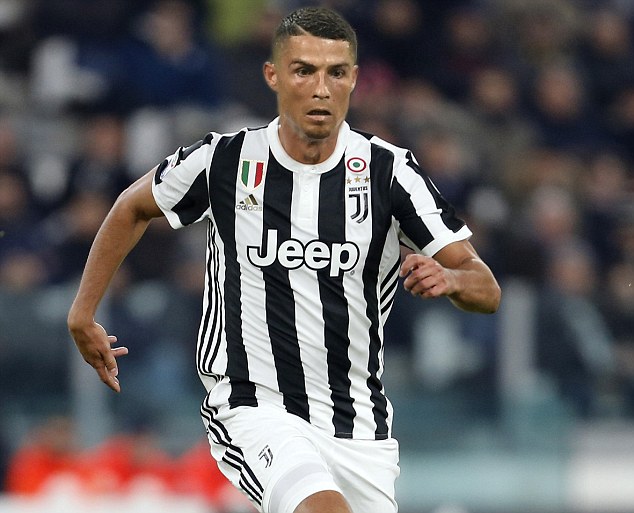 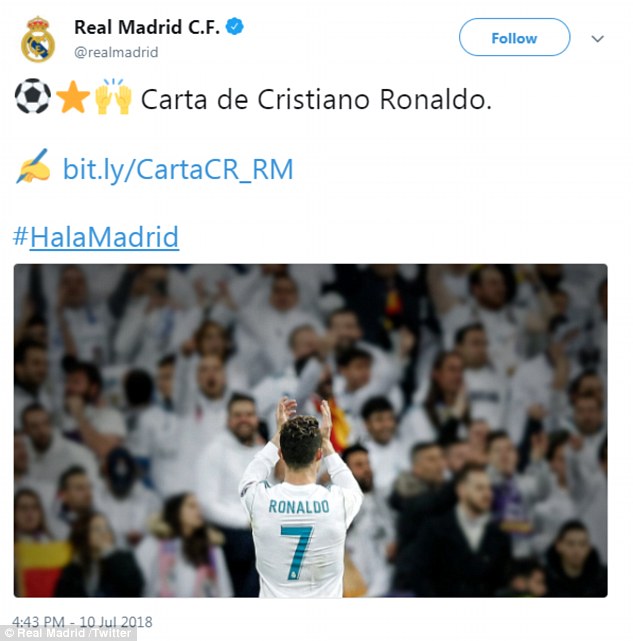 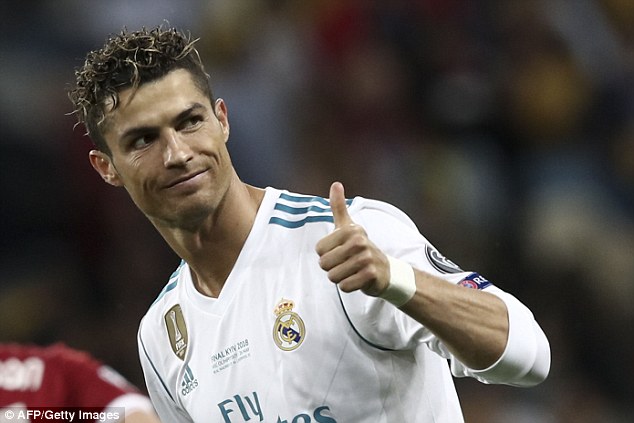 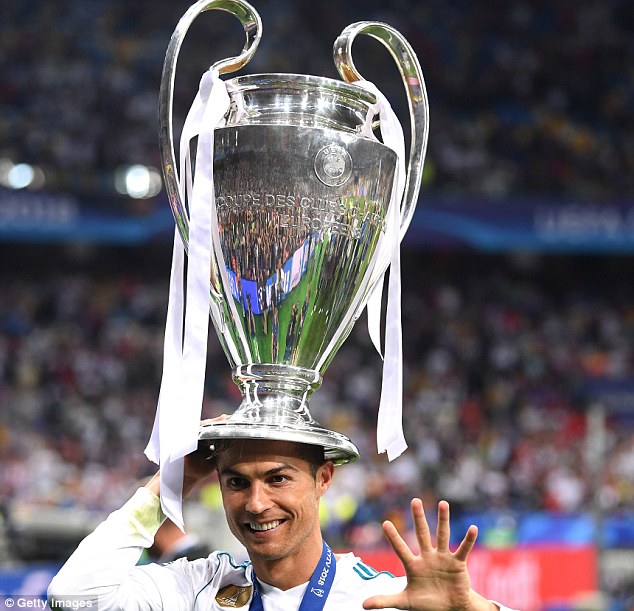 WILL RONALDO’S FIRST GAME BE AGAINST REAL?

Cristiano Ronaldo’s first game for Juventus could be against his former club.

The two sides meet in the International Champions Cup at the FedEx Field in Washington on August 4.

Ronaldo thanked Real Madrid for making his time at the club ‘possibly the happiest of my life’, but added that he felt it was the right decision to move on.

He said: ‘I believe that the time has come to open a new stage in my life and that is why I have asked the club to accept transferring me. I feel that way and I ask everyone, and especially our followers, to please understand me.’

An hour after Real Madrid’s statement, Juventus confirmed the news of Ronaldo’s capture on their website.

The club confirmed that they will pay £88m (€100m) to the Spanish giants, with a further payment of £10m is believed to be going to his first club Sporting Lisbon. 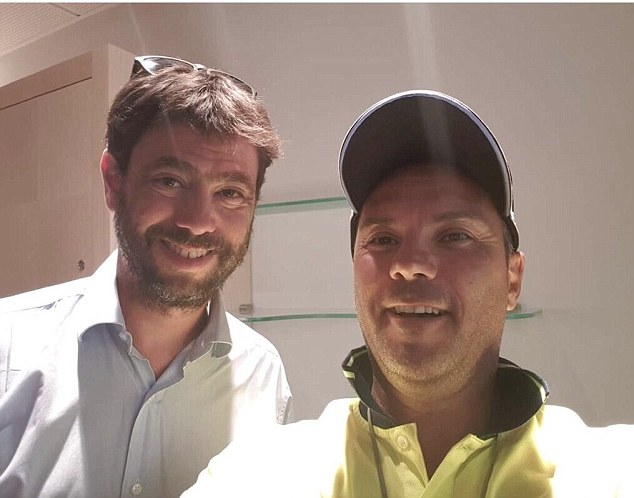 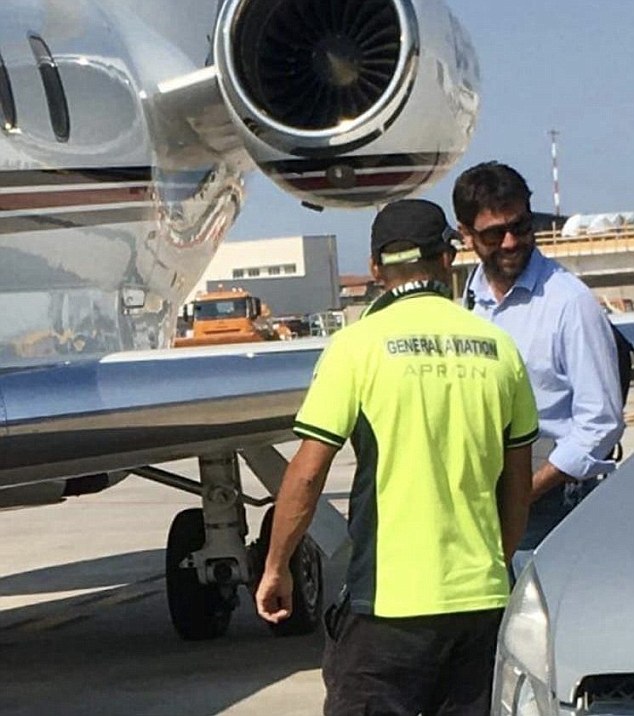 These years in Real Madrid, and in this city of Madrid, have been possibly the happiest of my life.

I only have feelings of enormous gratitude for this club, for this hobby and for this city. I can only thank all of them for the love and affection I have received.

However, I believe that the time has come to open a new stage in my life and that is why I have asked the club to accept transferring me. I feel that way and I ask everyone, and especially our followers, to please understand me.

They have been absolutely wonderful for 9 years. They have been 9 unique years. It has been an exciting time for me, full of consideration but also hard because Real Madrid is of a very high demand, but I know very well that I will never forget that I have enjoyed football here in a unique way.

I have had fabulous team-mates in the field and in the dressing room, I have felt the warmth of an incredible crowd and together we have won 3 Champions Leagues in a row and 4 Champions Leagues in 5 years. And with them also, on an individual level, I have the satisfaction of having won 4 Gold Balls and 3 Gold Boots. All during my time in this immense and extraordinary club.

Real Madrid has conquered my heart, and that of my family, and that is why more than ever I want to say thank you: thanks to the club, the President, the directors, my colleagues, all the technicians, doctors, physios and incredible workers that make everything work and that are pending every detail tirelessly.

Thank you infinitely once more to our fans and thanks also to Spanish Football. During these 9 exciting years I have had great players in front of me. My respect and my recognition for all of them.

I have reflected a lot and I know that the time has come for a new cycle. I’m leaving but this shirt, this shield and the Santiago Bernabéu will continue to always feel as my own wherever I am.

Thanks to all and, of course, as I said that first time in our stadium 9 years ago: Hala Madrid!

‘Juventus Football Club SpA announces that it has reached an agreement with the company Real Madrid Club De Futbol SpA for the definitive acquisition of the right to the sports performances of the player Dos Santos Aveiro Cristiano Ronaldo against a fee €100million, payable in two years, plus the solidarity contribution provided for by the FIFA regulations and accessory charges for €12million,’ the statement read.

‘Juventus signed a four-year sports performance contract with the same player until June 30, 2022.’

Ronaldo leaves Real Madrid with a legacy littered with smashed records and a haul of trophies.

He is the Spanish club’s all-time top scorer with 450 goals in all competitions and won two La Liga titles and four Champions Leagues with them.

‘For Real Madrid, Cristiano Ronaldo will always be one of its greatest symbols and a unique reference for the generations to come,’ Real Madrid’s statement added.

‘Real Madrid will always be his home.’ 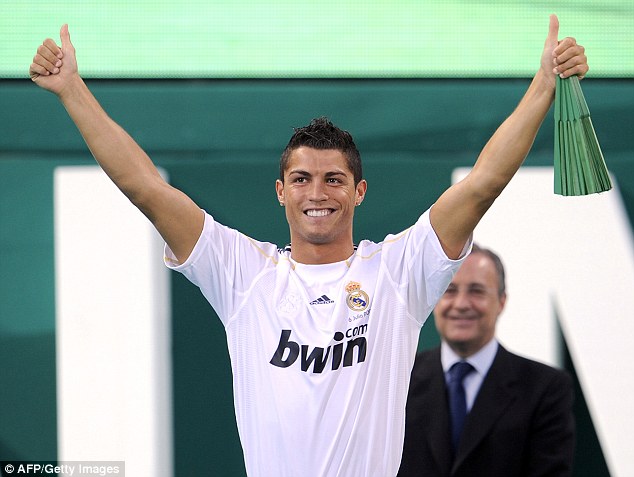 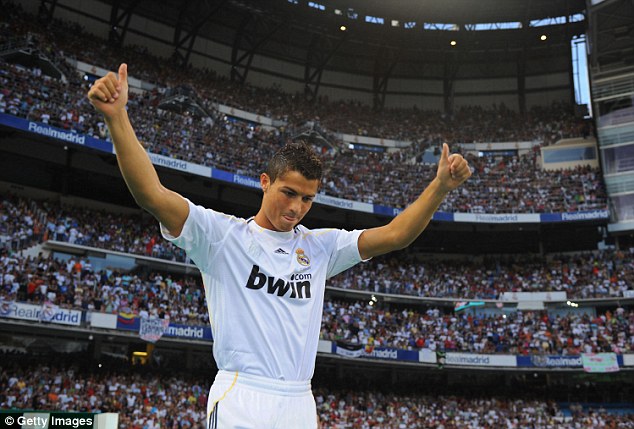 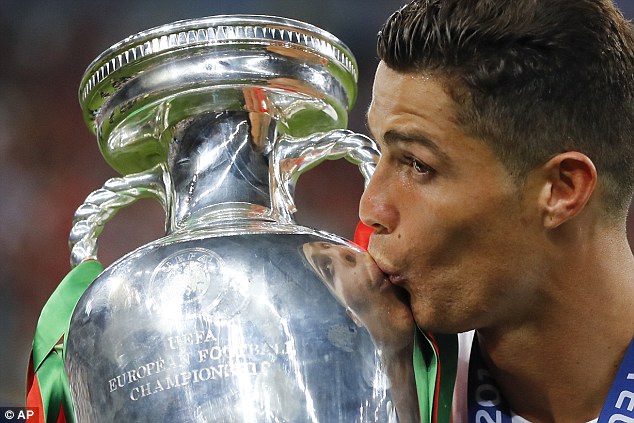 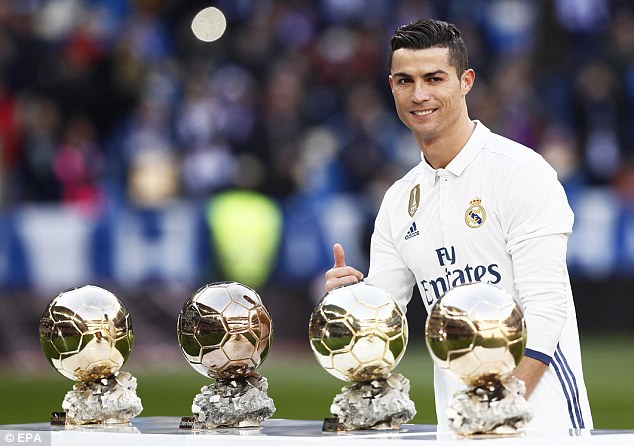 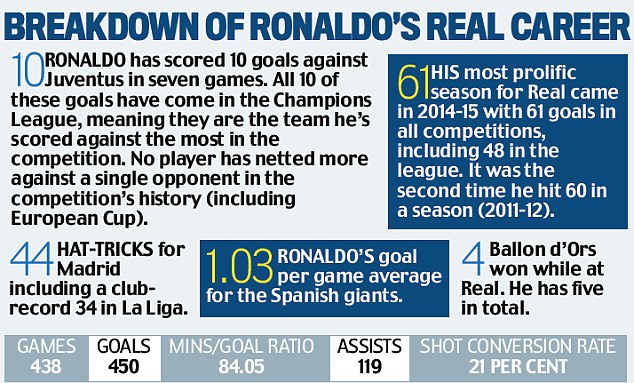 While there was success, Ronaldo also had, at times, a turbulent relationship with Real Madrid’s club hierarchy, particularly club president Florentino Perez.

The first signs of an uneasy relationship emerged when he declared on the pitch in 2012, ‘I’m sad and the club know why’, and they reared their head again after the 4-1 win over Juventus in the 2017 Champions League final when newspaper A Bola said he had decided to leave.

Ronaldo’s complaints, said to be centred around Real’s reluctance to hand him a pay-rise and a perceived lack of support for him in his legal battle against the Spanish tax authorities, received little sympathy among fans or the Spanish media, however.

Their patience wore even thinner when he hogged the narrative after Real had beaten Liverpool in the 2018 Champions League final in Kiev by saying ‘it was beautiful to play for Real Madrid,’ seemingly re-airing his dissatisfaction with the club.

It was an unedifying yet strangely fitting end to a glorious yet bumpy marriage between one of the sport’s greatest ever players and one of its most storied clubs. 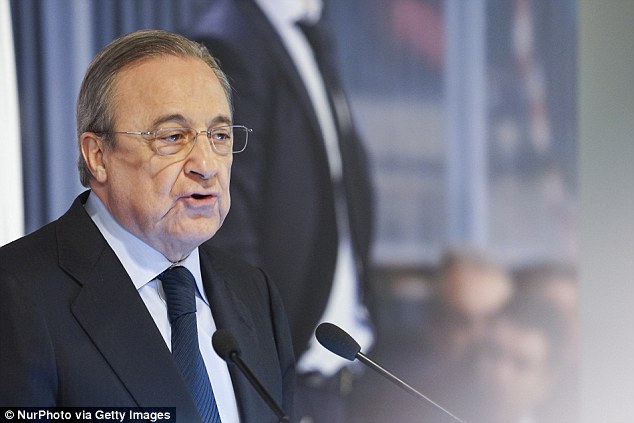 Ronaldo will rightly be remembered as one of Real’s best ever players, although he never quite enjoyed the God-like status he seemed to craved.

The 33-year-old’s first game for Juventus could come against his former club when the two meet in the International Champions Cup.

The two play each other on August 4 at FedEx Field in Washington.

Nevertheless, former Real Madrid team-mates were quick to post their own tributes to Ronaldo.

Defender Sergio Ramos tweeted: ‘Cristiano, your goals, your numbers and everything we’ve won together speak for themselves. You have earned a special place in the history of Real Madrid. 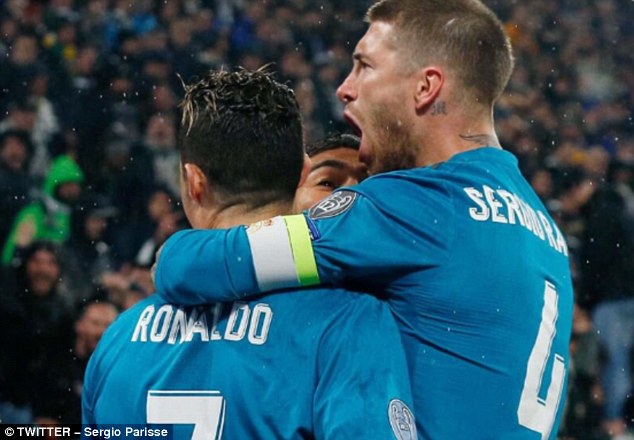 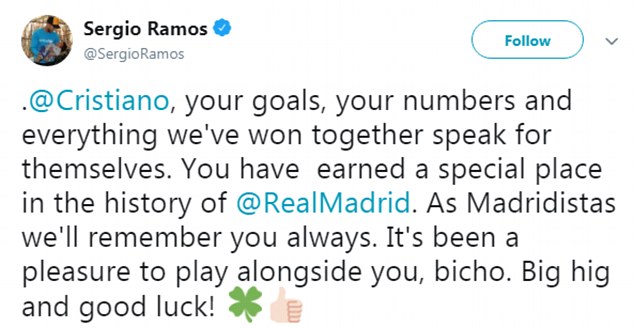 Defender Sergio Ramos tweeted saying it was a ‘pleasure to play alongside you, bicho’

‘As Madridistas we’ll remember you always. It’s been a pleasure to play alongside you, bicho. Big hug and good luck!’

Sami Khedira, who played with Ronaldo at Real Madrid before joining Juventus in 2015, added: ‘Benvenuto a Torino (Welcome to Turin), Cristiano.

‘We had a great time together in Madrid, I can’t wait to get back to work with you! Today is a special day for Juventus.’ 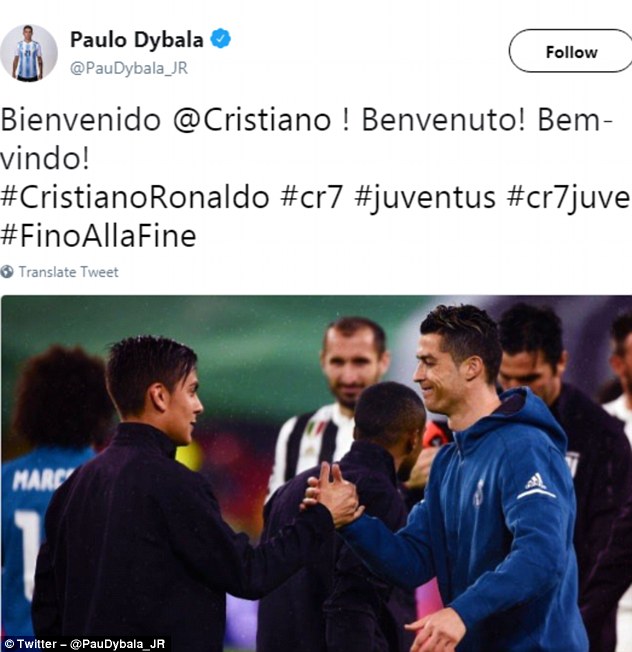 4 – Champions League titles with Real, including the last three in succession.

4 – Ballon d’Or awards won with Real, making five in total after he was first recognised as the world’s best player in 2008 when he was with Manchester United.

44 – hat-tricks for Madrid including a club-record 34 in LaLiga. Two came last season, against Girona and Real Sociedad in LaLiga.

8 – the Girona game marked the eighth time he had scored four or more goals in a Real match. That included five-goal league hauls against Granada in 2014-15 and Espanyol the following season.

8 – his first three goals in that 9-1 win over Granada came in eight minutes, equalling the club record for the quickest ever hat-trick.