Colin Tizzard reported on Monday that his handful of stable stars remain in excellent health after their various successes over the Christmas period, and the West Country trainer hopes to have at least three runners in the Cheltenham Gold Cup 10 weeks from now.
Thistlecrack, who provoked such excitement with the manner of his King George success, is already on course for a return to Cheltenham at the end of this month, when Tizzard hopes to see a more fluent round of jumping than he produced there in November.

“The buildup to it all seemed to go on for ever,” Tizzard said of last week’s action, “but before you knew it, it had all come and gone. It was a fantastic few days for us. All the good horses ran right up to their best, apart from Cue Card, who might not have been quite as good.

“The decisions we made worked out a treat,” he said, referring to Thistlecrack’s switch into the King George from the Kauto Star Chase, which Tizzard then won with the 33-1 shot Royal Vacation.

He also landed the Welsh National at Chepstow with Native River.

“Thistlecrack looked every bit as good as we hoped he would. He looked like that over hurdles and then over fences and now he’s done it to Grade One horses. He’s right at the top of his game. 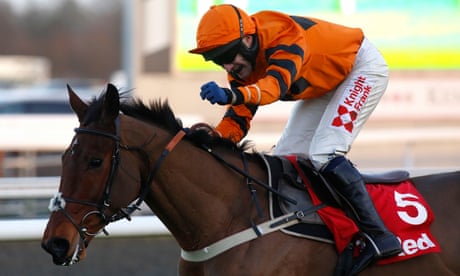 “When he was clear at the second-last, he shortened up and jumped it steadily with the race in the bag, which other horses couldn’t do. He’s got a big engine; he’s got everything.

“The only time when his jumping looked slightly suspect was at Cheltenham and then it was only at one or two fences, when he stood off too far and landed on one. I think he learnt from that. These good horses don’t make the same mistake twice.”

Just the same, Thistlecrack will return to Gloucestershire for the Cotswold Chase on 28 January for the sake of some more experience at the home of jump racing. “We’re trying to win a Gold Cup, so are we going to leave him in his box for 10 weeks? No,” Tizzard said.

“He’s a big, strong boy but he quite often looks a bit tired in his stable for a few days after a race. It might appear he’s not been involved in a hard finish but I’m glad it’s five weeks between his races. That’s plenty of time to recover.”

Tizzard suggested Native River might, by contrast, go straight to the Gold Cup. His ex-French seven-year-old Alary is also being aimed at that race and could make his debut for the yard in Newbury’s Denman Chase next month.

Cue Card will be returned to a shorter distance in next month’s Ascot Chase before a decision is taken about whether he also lines up in the Gold Cup or tries to win a second Ryanair Chase at the Festival.

Moore has ridden only in Ireland for the past fortnight and his second place on Aurillac at Newbury on 14 December was his most recent ride for Curtis, the 22-year-old having been named as her stable jockey only seven months before.

Curtis said on Monday she did not wish to comment, while Moore did not respond to inquiries.

Irish Cavalier provided both with a major success when beating Cue Card in Wetherby’s Charlie Hall in late October and they shared 19 other winners in recent months at an excellent strike rate.

Curtis’s stable, near Newport on the Pembrokeshire coast, continues in form, the trainer having relied on Richard Johnson and Aidan Coleman for most of her recent runners, including a Grade Three success with Shantou Flyer at Cheltenham on Sunday.