Tiger roars back in Augusta Woods The back nine at Augusta National has long been the place where greatness shows itself, and now we have the ultimate example.

In scenes of joy so pure and unconfined they might be unrivalled in the history of the sport, Tiger Woods completed his extraordinary comeback by winning the 83rd Masters.

Tiger let out one cry of ecstasy after another following the completion of his one stroke triumph but then so did everyone else gathered round the 18th green. Woods hugged his two children Charlie and Sam, who’d always wondered what it must be like watching their dad win a major.

Now they will always have the memory of surely the pick of the bunch, a 15th triumph wrenched against odds so forbidding as to be almost unimaginable. 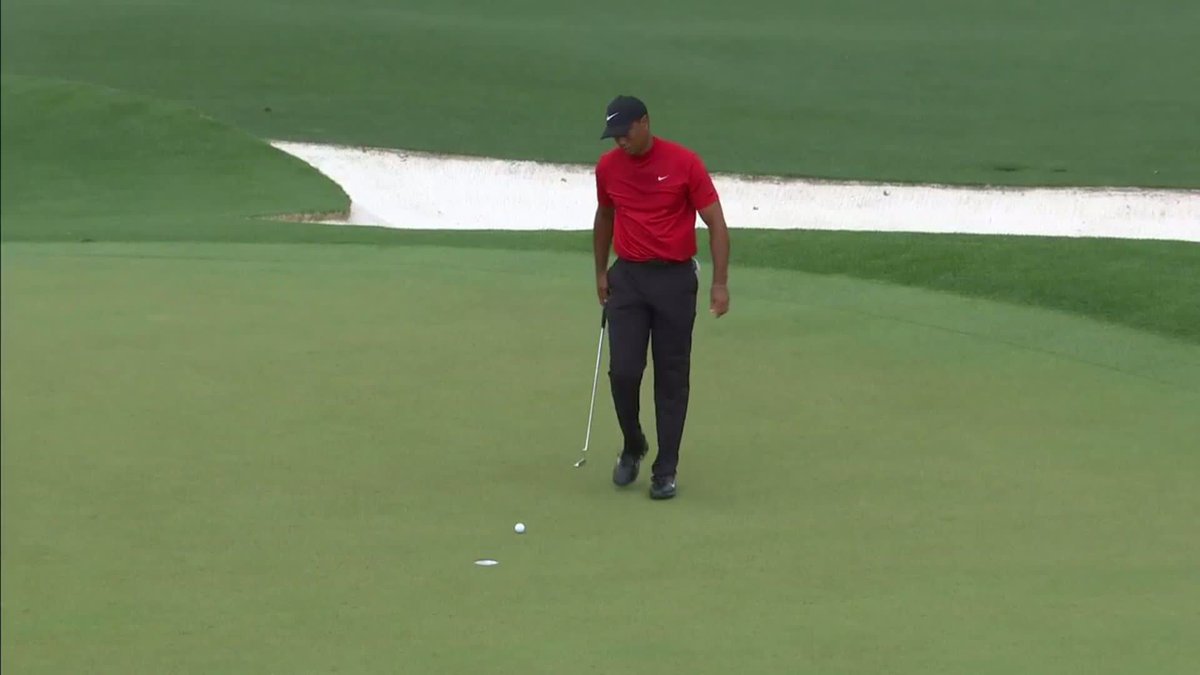 THE FALL AND RISE

Tiger Woods since winning his last major, the US Open 2008:

2009 Admits to many affairs and is arrested after driving in to a fire hydrant, fence and hedge at home. Takes an indefinite break from the sport

2014 Back surgery and misses Masters

And so, 22 years after his first major win here, when his father Earl met him off the 18th green and wrapped him in an enormous bear hug, this time it was as a father himself that he was greeted by his own two kids. It might only be April, but it’s safe to say we’ve already seen the sporting story of the year.

Never mind that it had been 11 years since his last major win, a torrid period where he had undergone so much it added up to a lifetime of experiences on its own. When the moment came and the most fabled back nine in the game, Tiger knew exactly what to do.

In a triumph that carried so many echoes with Jack Nicklaus’s 18th major win here in 1986 it was positively eerie, the 43 year old crushed the spirit of many of the leading players in the modern game.

Back in the Golden Bear’s time, it was the leading European Seve Ballesteros who dumped the ball in the water at the 15th – and now it was the Open Champion Frankie Molinari.

Back then it was Greg Norman who missed putts when it really mattered and this time it was the equally athletic Brooks Koepka who found his putting stroke failing him completely on the 18th.

Let the debate begin as what is the greatest sporting miracle of all time but this one is right up there with any you care to mention. It came almost two years to the day that Tiger rose gingerly to his feet at the Champions Dinner and told a hushed gathering that he feared his playing career was over.

Not that anyone needed telling, of course. After three back operations Woods had returned each time but ended up in such pain he could barely walk, let alone play. It was the fourth one that changed everything, coming a month following those words at the Champions Dinner; a fusion operation that allowed him to dream once more. Allowed us all to dream once more.

As so often on the final day at the Masters, the front nine was all about jockeying for position. The only obvious thing to emerge was that, alongside Woods, there was a different Molinari on view from the impervious Italian we saw for the first three days.

The man who barely misses a fairway from one tournament to the next missed two in a row. The crisp iron player who located green after green over the first 54 holes was now wearing out his wedges, so often did he have to resort to chipping. It says everything about how much his oft-overlooked short game has improved that he saved par on no fewer than four occasions over the front nine, but it couldn’t last.

Experience told Woods that he didn’t need to force the issue before anyone reaches Amen Corner. It was there – isn’t it always? – that the miracle came into view.

The par three 12th is comfortably the shortest hole at Augusta but the Golden Bell, as it is known, has tolled for so many over the years it deserves a book all its own. Koepka found the water with his tee shot; so did Ian Poulter to end his valiant efforts. So did Tony Finau.

3,954 – days since victory over Rocco Mediate in a US Open play-off at Torrey Pines.

1,199 – Woods’ ranking in the world in November 2017. Victory at Augusta National means he will be sixth in Monday’s updated standings.

14 – years between Woods’ fourth and fifth victories in the Masters.

683 – weeks he has spent at world number one during his career, a record.

281 – consecutive weeks spent as the world’s best golfer, which is also a record.

5 – Woods is one of five players to have won all four major titles.

48 – His score for nine holes at the age of three on the Navy golf course in Los Alamitos.

1 – Woods is the only player to hold all four major titles at the same time, winning the US Open, Open Championship and US PGA in 2000 and the 2001 Masters.

Most significantly, of all, so did Molinari. The man who’d only had two bogeys in the entire tournament to that point wrote down the double bogey on his card that changed everything.

Tiger? He didn’t go near the flag which looks like it’s hanging in the water from the tee, playing to the middle of the green and two-putting for par. He was tied for the lead.

The textbook example of how to play these glorious risk-reward holes continued. Two putt birdies at the 13th and the 15th, not trying for glory and two eagles but playing for the meat of the green each time.

Now he was one in front for the first time. The moment they posted that on the main leaderboard at the 18th will go down as the roar heard round the world. Better still was to follow.

Tiger knew his tee shot to the gorgeous par three 16th, with its inviting flag position, was on the money. ‘Come on, come on,’ he urged it continually, as the ball took the slope inexorably down to the hole.

Summing up this momentous day was the sight of the greatest Olympian of all and avid golfer Michael Phelps, right behind the tee and cheering himself hoarse. Eventually the ball came to rest 2ft away and now Woods was two clear. One by one they had melted away. Young American Patrick Cantlay hit the front himself at the 15th but bogeyed the next two; Xander Schauffele could only par the 15th; finally, not only Koepka but world number two Dustin Johnson had the chance at the 18th to trim the lead to one and make things uncomfortable.

But what’s the point in trying to take on history when it’s moving inexorably in one direction? Neither came close to holing their putts.

Tiger, therefore, could afford a bogey on the last. Afford to think back on all the suffering and the heartache of the last 11 years, as he made his way up the steep fairway. Take in all that the scene meant and what it had come to represent.

In the end he was left with an 18-inch putt to win, and when he holed it, bedlam reigned.

HOW THE GREEN JACKET WAS WON

2.16pm Bryson DeChambeau gets a hole-in-one on the 16th – his first ace ever.

3.12 Woods makes first birdie of the day on 3rd to move one stroke behind.

4:18 Two-shot swing as Woods makes birdie while Molinari picks up a bogey on the 7th.

5:33 Molinari hits into water on par-3 12th before picking up a double bogey at 15 as Woods goes joint-level at the top of the leaderboard.

5:44 Justin Thomas gets the second hole-in-one of the day with an ace on the 16th.

5:52 Patrick Cantlay moves to the top of the leaderboard on 12-under after eagle on 15.

5:56 Xander Schauffele joins Cantlay in pole position on -12 after picking up back-to-back birdies on the 13th and 14th.

6:04 Woods and Molinari join the leaders after birdies on par-5 13th.

6:34 Molinari’s Masters dreams dashed as he goes into water with third shot on par-5 15th.

6:40 Woods grabs outright lead on 13-under par after making birdie on the 15th.