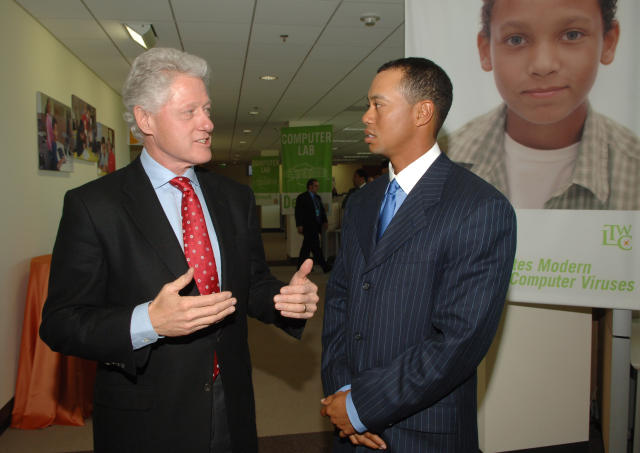 There’s a new Tiger Woods biography hitting the shelves next week, and excerpts are rolling out. Golf Digest has published a look at how Woods and a former president got along — or didn’t — on the golf course.

Per the excerpt, the Tiger Woods Foundation was apparently quite the centrepiece of political intrigue.

Woods began the foundation as a means of bringing golf to underprivileged kids; later, after 9/11, he tried to add a bit of gravity to the foundation’s efforts. Woods and his team oversaw the construction of the 35,000-square-foot Tiger Woods Learning Center in Anaheim, Calif., a noble and worthwhile effort that deserved an appropriately grandiose opening.

Team Tiger reached out to first Barbara Bush and later Arnold Schwarzenegger, but neither was able to attend. Some searching of contacts led the team to consider former president Bill Clinton, and thereby hung a tale.

It seems Woods and Clinton had a bit of an ugly history.

“Woods declin[ed] to attend a 1997 ceremony honouring the late Jackie Robinson, sparking a schism between Clinton and Woods that was later widened by a subsequent Ryder Cup incident in which Clinton walked into the U.S. team’s locker room only to see Tiger walk out,” according to the book.

“Later, Woods refused to have his picture taken with Clinton when the victorious American team visited the White House.”

Woods assumed Clinton would be every bit as vindictive and grudge-holding as he himself was. But the team made the ask anyway, and Clinton came back with a big-timing set of demands worthy of a former president: Clinton wanted a private plane to fly to the West Coast. Clinton wanted a round of golf with Woods to smooth out any lingering hard feelings. And Clinton wanted Woods to make the call personally.

“After several moments of whining,” the book reads, “Tiger got over his reluctance and made the call.” Clinton accepted, and the golf game was on.

Oh, but the story doesn’t end there. The morning of the promised round, Woods apparently told observers that he couldn’t wait for Clinton to arrive, because “I can’t wait to talk about [a vulgar term for the female anatomy that you can probably guess].”

The round went downhill from there. “Tiger’s behavior did nothing to bridge the gap between him and Clinton,” according to the book.

“At the outset, Clinton started carrying on, monopolizing the conversation, as he was known to do, before Woods interrupted and said, ‘How do you remember all that [stuff]?’

Once they got onto the course, Tiger acted completely indifferent to the entire group, mostly riding alone in his cart and spending an inordinate amount of time on his phone. After finishing a hole, he would routinely exit the green while others were still putting, a major breach of golf etiquette.

When the president hit a wayward drive, Woods snickered. He also told a series of off-colour jokes.”

Oh, and Woods apparently took months to sign and return an autographed photo of himself and Clinton taken that day. The entire afternoon didn’t sit well with the entire Clinton team.

“Clinton hauled his [back end] out West,” one colleague said years later, “and you can’t sign a picture? The whole experience was a lot of ‘I’m Tiger Woods, king of the world, go [expletive] yourself.’”

As always, the usual caveats about one-side-of-the-story apply. But if you’re interested in hearing that side of the story, read the full excerpt here, or pick up “Tiger Woods” next week.