Time to walk the talk, Floyd! 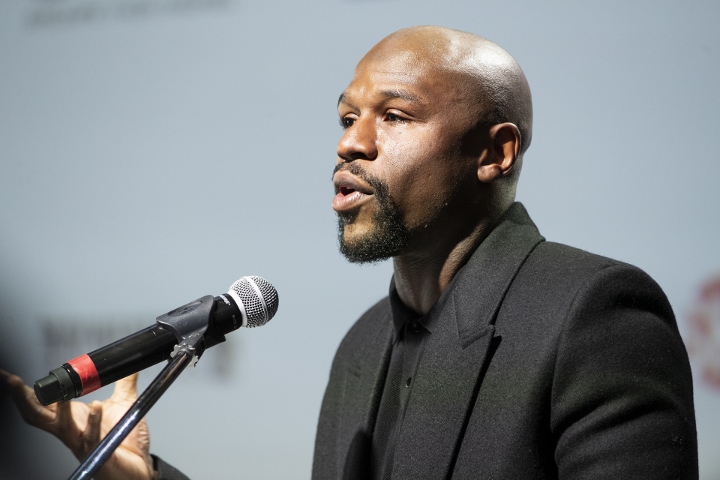 Legendary Floyd Mayweather admitted Wednesday night that his promotional company is at least partially responsible for one of boxing’s most prominent problems.

The retired superstar blamed the IBF, WBA, WBC, WBO and, to a lesser degree, Mayweather Promotions, for the alphabet organizations baning the sport.

Mayweather, who was promoting the Gervonta Davis-Leo Santa Cruz pay-per-view event, accused the most recognized sanctioning organizations of creating even more than four champions in the same weight classes simply to take more fees from fighters who compete for super, world and interim championships.

Davis’ promoter implored the aforementioned governing bodies and fellow promoters to band together to stop sanctioning practices that confuse current boxing fans and turn off those just casually interested in the sport.

“I wanna say this right now about the sport of boxing, and I want everybody at home to hear me when I say this – a belt, I’m tired and [when] I’m at home – and this goes for any company,” Mayweather said during Davis’ open workout in Las Vegas, which was streamed live on Showtime Sports’ YouTube channel.

“It’s not a such thing as a super champion, not at all. And I’m not taking nothing away from no fighter. It’s too many belts.

“People don’t know you have to pay, for every belt that you win, there’s a sanctioning fee.

“Then, if a fighter is a super champion, then he has to pay a sanctioning fee. This is not good for the sport of boxing.

Sanctioning organizations typically take 3% from the purses of champions and challengers when he or she competes for one of its titles.

Those sanctioning bodies sometimes take less than three percent from boxers’ purses when multiple titles are at stake in the same championship match.

It is possible, however, for fighters to pay a total of 12 percent from their purses in a full title unification bout, when four titles are on the line.

Mayweather implicated his own company in these sanctioning shenanigans because just two months ago one his fighters, Rolando Romero, won the WBA’s interim lightweight title when he recorded a controversial 12-round, unanimous-decision victory over Jackson Marinez at Mohegan Sun Arena in Uncasville, Connecticut.

The WBA currently recognizes at least three champions in 12 of boxing’s 17 weight classes.

Santa Cruz and Davis will fight for Santa Cruz’s WBA “super” 130-pound crown when they meet in a Showtime Pay-Per-View main event October 31 at Alamodome in San Antonio.

Davis’ WBA world 135-pound championship also will be at stake, even though neither Davis nor Santa Cruz can weigh in above the junior lightweight limit of 130 pounds for their 12-round fight.

The WBC also has drawn more criticism since June 2019, when it introduced the franchise champion designation. Franchise championships were not supposed to be transferable, but Lopez won the WBC’s franchise lightweight title from Lomachenko.

“Now, we look at the lightweight division, OK,” said Mayweather, who owned WBA “super” championships in the 147-pound and 154-pound divisions during the final few years of his career.

“And I wanna say the fight the other day [Lopez-Lomachenko] was a hell of a fight. Congratulations to the winner. He done his job. He went out there and did what he had to do.

“But if Devin Haney is the WBC champion at lightweight, right, and Gervonta ‘Tank’ Davis is the WBA champion, now it’s safe to say that Teofimo is the IBF and the WBO champion. But I can’t knock what he has done, because I have to take my hat off to him, you know, for what he has done.”

If Mayweather were real, he would recognize Lopez as the legit WBC champion, having defeated then legit holder, Lomachenko in the ring, last Saturday, not Haney, who was gifted the title.

That practice of gifting world titles, too, must stop! It’s a shame! I wonder why Mayweather didn’t condemn, that, too.

If you’re coming clean, then, come clean, all the way, okay, Floyd? Otherwise, you would risk lack of authenticity.

Mayweather’s claim regarding Haney and Davis aside, Lopez certainly can argue that he is boxing’s undisputed lightweight champion.

He defended his IBF belt when he out-boxed the favoured Lomachenko to win a unanimous decision, and took the WBA “super,” WBC franchise and WBO championships from the Ukrainian southpaw.

Lomachenko was widely viewed as the true WBA and WBC lightweight champion, even though Haney and Davis have ‘won’ versions of those 135-pound crowns. That requires asterisk designation.

Lomachenko defeated Luke Campbell by 12-round unanimous decision to win the then-vacant WBC world lightweight title in August 2019 at O2 Arena in London.

The WBC gift-wrapped Haney the WBC title, unsportingly, once it designated Lomachenko as its franchise champion, crookedly, trading in merit for profit!

Fifteen months before he beat Campbell, Lomachenko knocked out Jorge Linares in the 10th round at Madison Square Garden to win the WBA’s “super” lightweight title.

Linares was commonly considered the WBA’s legitimate lightweight champion at that time.

Davis later ‘won’ a vacant version of the WBA’s 135-pound championship when he stopped Yuriorkis Gamboa in the 12th round last December 28 at State Farm Arena in Atlanta. Now, that was no legit world championship fight! It was contrived, to say the least, and it’s a great shame the alphabet organization entrepreneurs’ stamina in sinking low, steadily, shamelessly!

Regardless, Mayweather wants more championship clarity in the sport.

“I don’t wanna knock no fighter, but I’m tired of seeing fighters after the fight, everybody got a championship belt now,” Mayweather said.

Well, his own fighters would take the hit.

“Now boxing, all these belts is like trophies. The WBC, the WBA, the IBF and the WBO, y’all have to clean this sh-t up.

“Y’all have to clean this up. This is bad for boxing. Ain’t a such thing as no super champion.”

Well, why cooperate with that malpractice?

“And this goes for my company as well,” he came clean, stressing, “We gotta clean this sport of boxing up. This sh-t, this don’t look good.