As Amy Tinkler came centre stage, a roar went up. The 17-year-old was placed fourth in the women’s competition at the World Cup ofGymnastics going into the final round, her favoured floor event. But the cheer was not one of encouragement. This was London’s O2 arena, with a crowd of around 12,000 people who had come from across the country to watch gymnastics hit the big time. The roar was Beyoncé-sized.

OK, maybe not Beyoncé, maybe Little Mix. But still, it made a point; this was a crowd here to cheer on their sport, a crowd overwhelmingly made up of women and girls. Gymnastics does not play to crowds like this. Or at least it did not, until Barry Hearn came along and saw a chance to leverage Olympics success into a genuine spectator sport.

Hearn wrote in his programme notes (the back page of the programme being left clear for autographs, a nice little touch) that he hoped to make gymnasts “into global megastars, not just once every four years but every day”. That seems a stretch at this point; Hearn has taken over promotion of this single event, not the entirety of the sport. But hyperbole has never hurt the boxing magnate previously and it was clear from this event that he has tapped into something. 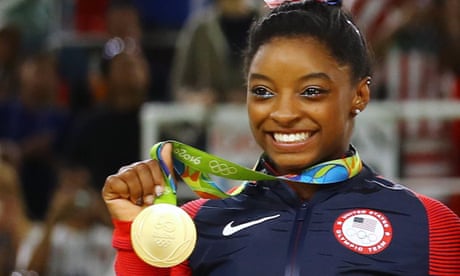 That something is girls and their mums. The audience for the women’s competition was almost at capacity, and it was at least 75% female. The organising bodies of cricket and football have spoken recently about their determination to involve more women in their sport – gymnastics has them already. It is difficult to think of a sporting event in this country that could claim a bigger female crowd, even for a one-off like this.

Tilly O’Shea and Mia Hodgson were typical of the crowd. They are 11 years old and love gymnastics in general and Simone Biles in particular. Mia’s dad had seen an advertisement for the event and bought the tickets. Her mother, Emma, had brought the girls along. “The boys have so many football matches that they can watch,” said Mia. “Now we have got this.” I asked Emma whether she was needed to help explain goings on. “Oh no, they’re telling me,” she said.

The event itself took place in the centre of the arena in Greenwich, eight pieces of Gymnova branded equipment – the vault, uneven bars, beam and floor for the women, floor and vault plus high bar, parallel bars, rings and pommel horse for the men – arranged around the space. In the very centre there was a recessed area where the gymnasts milled between events joined by other entertainers of varied athletic ability.

What Hearn appears to have intuited, and correctly, is the close relationship between gymnastics and various other strands of contemporary youth culture. The entire proceedings were soundtracked by blaring R&B music, which might dip away in the middle of a beam routine but never cut out. The acts between rounds included Britain’s Got Talent stars (the Boogie Storm, five men doing street dance in Star Wars uniforms) and a group of men in flat caps and braces who did streetdance while jumping rope.

When watching Max Whitlock perform a brief exhibition routine of his own as an interlude, you could clearly see the relation between it all. Indeed, some of Whitlock’s one-armed spinning flair moves that form a key part of his floor routine are themselves adapted from breakdancing. Strength, grace and rhythm are an intoxicating combination and this applies as much in the pop world as in sport.

Another thing gymnasts share with the entertainment world, particularly that of reality TV, is that they talk the same language.

Whitlock did not take part in the men’s category as he builds his return to competition to coincide with the World Cup this year. But he did speak to the assembled crowds and told them of how humbled he had been by his success and how the key is “lots of hard work, and to keep pursuing your goals”.

There was no doubt that this new World Cup of Gymnastics was a successful event. The only quibble would be with the actual sport. Whitlock was not the only big name who did not take part. There was no Nile Wilson or Bryony Page or Louis Smith. There was absolutely no chance of seeing Biles, who will not return to competition for at least another year, if indeed she does at all. Three other athletes, including Britons Ellie Downie and Georgie Mae Fenton, withdrew injured in the 48 hours leading up to the event. The unfortunate Chinese athlete Liu Jinru went through the entirety of the women’s event on what looked like a sprained ankle.

The problem with trying to turn gymnasts into megastars “not just every four years” is that it is precisely that quadrennial event that matters to the athletes. No one is going to disrupt their plans, which are likely laid out for Tokyo 2020 already, just for the adulation of the crowd. As such, not only were there athletes missing, those gymnasts present were lacking their customary rhythm and, for the most part, kept the difficulty of their routines something close to rock bottom.

At the same time Hearn will not have finished with his tinkering just yet neither. Tinkler’s strong final round on the floor pulled her up into third position in the women’s event and the cheers were enormous. The tumbling is getting louder.