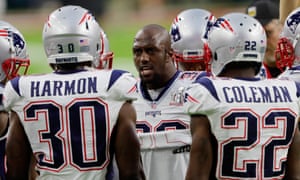 Devin McCourty told Time: ‘I can’t imagine a way I go there.’
Devin McCourty has become the second New England Patriots player to confirm he will not accept an invitation to the White House from Donald Trump.

Tight end Martellus Bennett said on Sunday he would decline the president’s customary invitation for the Super Bowl winners, and McCourty followed suit by saying: “I can’t imagine a way I go there.”

Earlier in the season, before a game against the Cardinals, McCourty and Bennett raised their right fists during the national anthem in support of the protest started by San Francisco 49ers quarterback Colin Kaepernick.

Bennett said that “America was built on inclusiveness not exclusiveness” and said he wouldn’t be attending any event with Donald Trump.

Trump was rooting for the Patriots on Sunday night and tweeted his congratulations to the team after their 34-28 win – but the president seemed upset when the Falcons were dominating. He left his own Super Bowl party when the Patriots were down 28-3.

Trump has repeatedly expressed his admiration for Bill Belichick and Tom Brady, and for Pats owner Robert Kraft. When the Patriots went to meet President Obama at the White House in 2015, after winning Super Bowl XLIX, Brady wasn’t there.

The team said he had a prior family commitment. Brady has spoken in the past about his friendship with Trump but has sidestepped questions about his relationship with the president since his inauguration.

…we have a small favour to ask. More people are reading the Guardian than ever but far fewer are paying for it. And advertising revenues across the media are falling fast. So you can see why we need to ask for your help. The Guardian’s independent, investigative journalism takes a lot of time, money and hard work to produce. But we do it because we believe our perspective matters – because it might well be your perspective, too.

If everyone who reads our reporting, who likes it, helps to pay for it, our future would be much more secure.