It is a depleted RB Leipzig squad that will arrive at Old Trafford on Wednesday. No matter.

Facing Manchester United in the Champions League is still a pleasure, but it no longer feels like a special treat for a club that reached the semi-finals last season, while Ole Gunnar Solsjkær’s side had to content themselves with the Thursday night version of continental action.

Julian Nagelsmann will do his Monday morning head count with Lukas Klostermann and Konrad Laimer among those definitely out and doubts over the always-running Kevin Kampl and Nordi Mukiele. The coach will make light of it, as he already has done since Leipzig fell short in the last four against PSG in Lisbon. The feeling on that August night was that perhaps the club’s youth-focused recruitment model had met its natural ceiling. Two months on, Saturday’s 2-1 win over Hertha maintained their lead at the top of the Bundesliga. 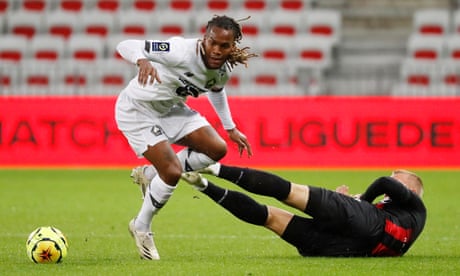 They had luck on their side, certainly. The four-minute cameo of Deyovaisio Zeefuik, who came on for the visitors and picked up two yellow cards in quick succession, helped to tilt the game in the home side’s direction. Meanwhile, the tackle by Jhon Córdoba – who had put Hertha in front early in the game – on Willi Orban to concede the winning penalty 13 minutes from the end was the dictionary definition of a striker’s challenge.

Three home wins out of three will please Nagelsmann, especially as Leipzig’s challenge for the title foundered on the back of frustration at Red Bull Arena, a venue that hosted five draws and one defeat in its final half-dozen Bundesliga games last season. Nagelsmann is under no illusions that he is dealing with a work in progress, but his players appear receptive. With the personnel adjustments required, it’s impressive.

Much of the focus, understandably, has been on the departure of Timo Werner. Twenty-eight goals and eight assists in the Bundesliga is a big hole to fill. The only other player in the squad to reach double figures in the league was Patrik Schick. When Leipzig were lukewarm at the idea of spending €25m on making his move from Roma permanent, the Italian club sold the Czech forward to Bayer Leverkusen instead.

So Nagelmann launched a clarion call to his players, rightly identifying that the RB model would not allow a direct replacement – so everybody was going to have to chip in. Though Alexander Sørloth was purchased after an excellent season at Trabzonspor (“you can see he still needs to get used to what our ideas are,” said Nagelsmann, while praising the forward’s efforts on his first Bundesliga start as “very decent”), the team’s growing versatility means the goals should, and will, come from everywhere. 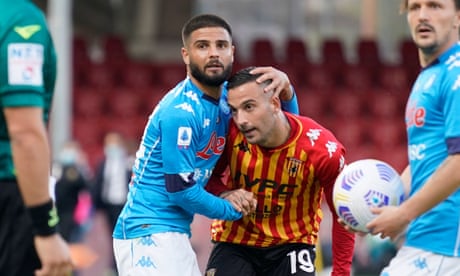 Insigne brothers trade goals as Roberto gets moment against Napoli

While midfielders such as Dani Olmo and the reborn Emil Forsberg are well set to thrive in this framework, everyone is getting involved. Five games into the league campaign, Leipzig have had eight different scorers. As well as scoring twice in the Bundesliga, Angeliño struck a double to seal a win in the Champions League opener against Basaksehir – from left wing-back. Seeing him ghost into the back post for a stooping header has become a familiar sight.

His first against Basaksehir, turning with his back to goal on the edge of the penalty area to rifle a shot into the far corner, was the sort of strike Werner would have happily claimed as his own and underlined that the team are playing more than mere lip service to Nagelsmann’s demand to multitask.

Against Hertha the vital equaliser, three minutes after Córdoba’s opener, came from an even more outside-the-box source. Dayot Upamecano muscled his way to a loose ball at a set-piece and thrashed in his first goal since May 2018.

The highly influential midfielder Marcel Sabitzer will have been earmarked to chip in, but he has been struggling with a muscle injury and in his absence, Leipzig’s smooth start becomes even more laudable. The captain said he was overjoyedto be back on Saturday, after adorning his first 21 Bundesliga minutes of the season as a substitute with a calmly struck winner from the penalty spot. Starting him in Manchester is something Nagelsmann suggested on Saturday would be “medically not so sensible”, though the temptation must be great given how the Austrian dominated Tottenham’s midfield on his last visit to British shores.

Next on the agenda is a new deal for Sabitzer. “Our goal is always to act early,” the sporting director, Markus Krösche, told Kicker, “He is a real leader, plays intelligently and always makes the right decisions.”

Other plans for the future are already in place, with the game against Hertha used by Nagelsmann not just for its own ends, by further blooding new arrivals in Sørloth, Justin Kluivert and Benjamin Henrichs.

The model is what it is. While they continue to generate opprobrium at home, Leipzig’s ability to grow and make themselves attractive to the world is hard to deny.

• Those Schalke fans who last week demanded a proud display in the Revierderby against Borussia Dortmund got what they wanted – at least for 45 minutes. After that, the class gap told and it was one-way traffic with the one Schalke fan identified among the 300 fans present taking his leave after Erling Braut Haaland made it 2-0. Mats Hummels wrapped it up it with his first derby goal – “one off the bucket list,” he said – while Manuel Baum is just starting to realise what a huge job he has on in Gelsenkirchen.

• Jobs don’t get much more intimidating than visiting Bayern at present and a willing Eintracht Frankfurt were swept away 5-0, with Robert Lewandowski helping himself to a hat-trick. With 10 goals in five games, he has scored more than 14 teams. Sunday also brought the news that Serge Gnabry would be released from quarantine with immediate effect after a series of negative Covid tests. He is ready to return for Tuesday’s Champions League game at Lokomotiv Moscow.

• Mainz arethe only team yet to register a point despite an improved display against Mönchengladbach, which saw them lead 2-1 via two goals from Jean-Philippe Mateta before Jonas Hofmann, Gladbach’s hero from San Siro, came on to score an equaliser and set up a Matthias Ginter winner. “We’re angry right now,” said the coach, Jan-Moritz Lichte, “and at least that’s better than disappointment.”