US gymnastics doctor charged with sexual abuse of girls

A Michigan sports doctor who treated elite female US gymnasts was charged on Wednesday with sexually assaulting nine girls, including some too reluctant to speak up because he was considered a “god.” 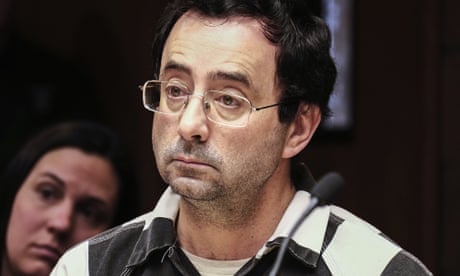 Roughly two dozen charges were filed against Dr Larry Nassar, the first criminal cases related to his work at Michigan State University where he was the preferred doctor for gymnasts in the region who had back or hip injuries. He’s also being sued by dozens of women and girls, including 2000 Olympian Jamie Dantzscher, who described the assaults on 60 Minutes on Sunday.

“This guy is disgusting. This guy is despicable,” Michigan attorney general Bill Schuette told reporters on Wednesday. “He is a monster.”

Nassar, 53, was a doctor for Indianapolis-based USA Gymnastics, until summer 2015, accompanying the women’s team at international competitions, including the Olympics. Michigan State fired him last September after he violated restrictions that were put in place in 2014 following a complaint.

Nassar’s attorneys declined to comment Wednesday. He has denied abuse, and, in an email last fall to his Michigan State bosses, said: “I will overcome this.”

The charges were filed in two cases: one in Ingham County, the home of Michigan State, and the other nearby in Eaton County, where Nassar saw injured girls at Gedderts’ Twistars, a gymnastics club.

He’s accused of sticking his fingers in their vaginas, without gloves, during treatments for various injuries. Parents were asked to leave the room or Nassar used a sheet or stood in a position to block any view, police said. Two girls were under age 13, and seven were 13 to 16.

“Dr Nassar used his status and authority to engage in horrid sexual assaults under the guise of medical procedures,” Schuette said.

A girl identified as Victim B, now 21, said she was sexually assaulted by Nassar “more times than she could count,” Detective Sergeant Andrea Munford wrote in an affidavit.

“Victim B stated that she and all the gymnasts trusted Nassar and that he was like a god to the gymnasts. Because it was happening to all of them, they thought it was normal,” Munford said.

Munford said Nassar sometimes gave gifts to girls to keep their confidence, including leotards and pins from the Olympics. One victim quoted Nassar as saying: “We don’t tell parents about this because they wouldn’t understand” – a reference to vaginal penetration.

Besides the criminal cases announced on Wednesday, Nassar faces charges in two cases that were filed in 2016 and are unrelated to his work as a doctor. He’s accused of possessing child pornography and molesting the daughter of family friends. He remains in jail without bond.

Dantzscher spoke to 60 Minutes about her experiences with Nassar.

“He would put his fingers inside of me, move my leg around,” she said. “He would tell me I was going to feel a pop and that that would put my hips back and help my back pain.”