All eyes have been on the NFL this past week, as players and teams are taking a knee in protest during the national anthem. In a method of demonstration initiated by former San Francisco 49er Colin Kaepernick just last year, kneeling during the country’s anthem has become a symbol for players taking a stance against police brutality and racism. President Trump spoke out against the act during a rally in Alabama, as well as through a series of tweets, expressing his belief that all players protesting should be fired from the league — setting an example for school administrations dealing with similar political expressions. 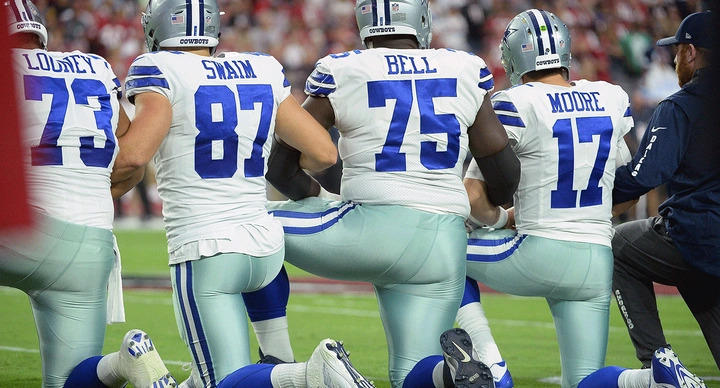 The controversy surrounding taking a knee has spread to schools across the country, where student athletes have been seen following in the footsteps of professional players on their high school fields. But it wasn’t until a 6-year-old boy went down on one knee in his classroom during the pledge of allegiance that parents began to realize that the political issue may need their attention.

In a first-grade classroom in Pasco County, Fla., on Monday, a young boy was reprimanded by his teacher for kneeling during the Pledge of Allegiance. Without being offered an opportunity to discuss his reasoning behind the action, the boy was told to stand up and stop his protest.

“I just wanted to let you know that this morning when it was time to do the Pledge of Allegiance, [your son] went down on one knee,” the student’s teacher told his mother through a text message. “I knew where he had seen it but I did tell him that in the classroom we are learning what it means to be a good citizen we’re learning about respecting the United States of America and our country symbols and showing loyalty and patriotism and that we stand for the Pledge of Allegiance. I know its a sensitive issue but I wanted to make you aware. Thanks”

The boy’s mother immediately took her case to the school’s principal, requesting that her son be placed in a different class. And although the school complied, it continued to support the teacher’s actions, which led the mother to share her upset with the local news station. She told the ABC affiliate that she encourages her son to “have an open mind and make decisions” and felt that was discouraged in this situation — a sentiment that child and family psychologistBarbara Greenberg agrees with.

“I am never a believer in public shame; there is nothing worse,” Greenberg tells Yahoo Lifestyle. “This child is probably a curious child if he’s watching what’s going on in his culture. Talk to the kid quietly about his thoughts and his views — that’s what should have happened.”

Pasco County School District spokesperson Linda Cobbe previously explained that the school was simply following state law. However, the district’s assistant superintendent, Kevin Shibley, has since issued a letter to educators about how best to handle a similar situation in the future, with a focus on avoiding public confrontations.

The idea of public shame is something that’s intertwined with the topic, as the president has spoken openly about firing professional players who take a knee during the anthem. Following suit, a school in Louisiana issued a statement on Thursday telling students that they would be removed from their sports teams if they chose to kneel. 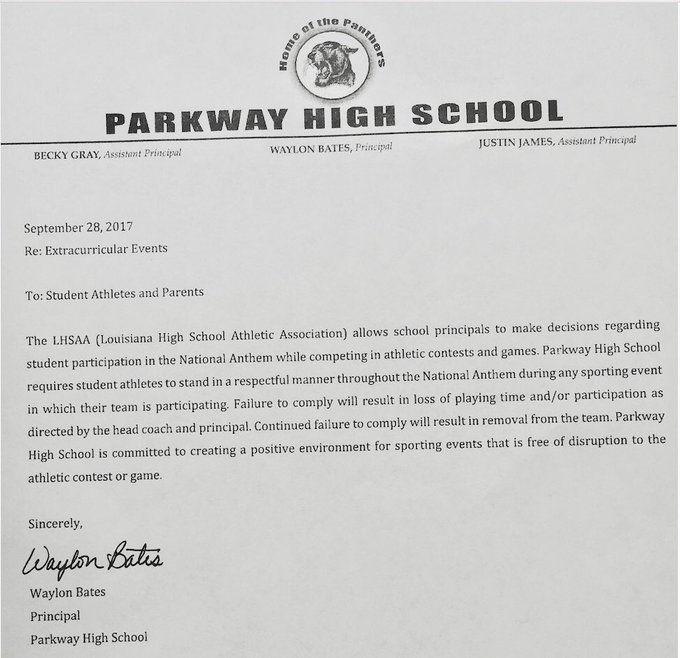 “Parkway High School requires student athletes to stand in a respectful manner throughout the National Anthem during any sporting event in which their team is participating,” the statement by principal Waylon Bates reads. “Failure to comply will result in loss of playing time and/or participation as directed by the head coach and principal. Continued failure to comply will result in removal from the team.”

Although the school’s administration didn’t respond to Yahoo Lifestyle’s request for comment, the Bossier Parish superintendent, Scott Smith, told HuffPost that the entire district of 34 schools would stand by the same decision.

“In Bossier Parish, we believe when a student chooses to join and participate on a team, the players and coaches should stand when our National Anthem is played in a show of respect. It is a choice for students to participate in extracurricular activities, not a right, and we at Bossier Schools feel strongly that our teams and organizations should stand in unity to honor our nation’s military and veterans.”

The news of the stance that the Louisiana school district has taken has gone viral, prompting a number of responses. However, the one receiving the most attention is from the American Civil Liberties Union (ACLU).

“The Supreme Court ruled that students don’t have to stand for the Pledge of Allegiance — that goes for the national anthem on the ballfield too,” the organization tweeted in response to Bates’s statement. In light of what the ACLU has pointed out, parents might want to be proactive in protecting their students by addressing the law with their districts.

“It’s a wonderful discussion,” Greenberg says. “To make sure that kids understand what it is that they’re doing, it provides a good opportunity for parents to teach their children.”

Conversations continue to be shut down in schools across the country, as three high schools in Long Island just warned against protesting during the anthem. However, a football coach in Illinois is an example of leaders and officials using the political controversy as a teaching moment for America’s youth.

On Sunday, Cahokia coach Orlando Gooden’s entire team of 8-year-olds took a knee during the national anthem after the kids approached him about what they had seen on TV, both on the field and in the streets of St. Louis, and said that they wanted to learn more about it. When asked what they knew about the current protests, one player said, “Black people are getting killed and nobody’s going to jail.”

“I felt like it was a good teaching moment for me to circle the team and have a meeting,” Gooden told PIX11 about a conversation he had led about the state of the country and Kaepernick’s protest. “One of the kids asked, ‘Can we do that?’ I said, ‘As long as we know why we’re doing it, I don’t have a problem with any of it.’”

As political issues continue to affect America’s culture, young students and citizens are bound to take action and, most important, ask questions.

“What I teach my kids is love, integrity, honesty, fairness, respect, and boundaries,” Gooden said. All things that the world needs a little bit more of.