The US Tennis Association is looking at changes to the game that they believe could speed up play and make for a more attractive prospect for television viewers.

According to Stacey Allaster, the USTA’s chief executive of professional tennis, the tweaks could include a 20-second clock for serves, the end of let calls for serves that fall fair and making sure matches start at the advertised time.

“We want to innovate, but we have to do it in such a way that we bring the players along,” said Allaster, although with the caveat that any changes would be tested at lower levels before being introduced on the pro circuit.

That’s the idea of experimenting with a 20-second serve clock this year at the US Open’s junior and college invitational tournaments. While it’s not clear yet whether matches have indeed moved along more quickly, it apparently has had an effect: out of 260 matches so far, 24 serve clock warnings have been issued, and none resulted in a repeat violation that would have resulted in a penalty point.

“I love it,” says Danielle Collins, who won the US Open’s collegiate title on Saturday. “Because in college tennis people stall really badly. It’s crazy how long people are taking between points.” 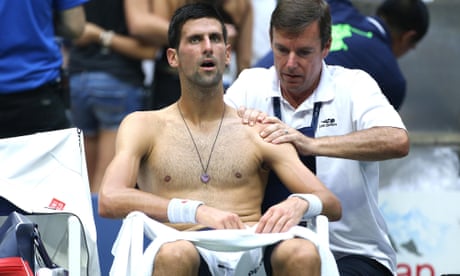 Slow play has been a point of contention on the pro tours for years because instead of employing a clock, any warnings or penalty points are left entirely to the umpire’s discretion. That tension was on full view during Friday’s men’s semi-finals, when both Stan Wawrinka and Kei Nishikori were warned about slow play, as was Gael Monfils in his match against Novak Djokovic.

Other ideas that have been discussed, according to Allaster include eliminating the service let, which would allow serves that hit the net and fall in to be playable; tighter policing of player bathroom and injury breaks; and reducing or eliminating the pre-match warm-up hit, which can delay the scheduled start of matches.

“If a fan tunes into ESPN for a 4 o’clock match and it doesn’t start until 4.15, we probably would have lost them because they will start to click and they will click onto another sport,” Allaster said. “So we have to be quicker in getting to the show.”

Allaster, who came to the USTA recently after serving as chief executive of the Women’s Tennis Association, said technology is another avenue of change. Allaster noted that shot-spotting technology to determine if balls are in or out, which has been a part of the Open since 2006, had the added benefit of helping fans get more engaged.
The same could happen, she says, if tiny cameras are put on players’ bodies or hats. “People could see what it’s like to return one of these big serves.”

Allaster noted that the US Open has been the first to introduce changes in the past: the competition remains the only grand slam tournament that decides the final set with a tiebreaker, and that its mixed doubles event now features no-ad scoring, meaning that at 40-40, one more point decides the game rather than one side having to win two in a row.

Also, all the other grand slam events with the exception of Wimbledon have gone to a best-of-three format for men’s doubles instead of best of five. But going to no-ad scoring in more events or to best-of-three in men’s singles at the majors are not ideas that have attracted much serious discussion, Allaster said, even with the unusual case of the top-seeded Djokovic getting three walkovers or retirements because of injuries to opponents.

“Could we say it will never happen? I wouldn’t say that. Is it on the short-term horizon? I would say that is not something being discussed,” Allaster said of the best-of-three idea. “But I would say everything needs to be on the table as it relates to the health and well-being of the athletes.”

Rajeev Ram, who lost in the mixed doubles final with partner CoCo Vandeweghe, questioned the wear and tear that best-of-five sets take on men in singles, and whether such long matches are really what plays best on television.

“I don’t know who has six hours to watch a tennis match, I certainly don’t,” Ram says. “What these guys can do out there is unbelievable. But to watch five sets of some of these guys playing 40-ball rallies, it’s just hard to think that that’s going to be, from the business side of tennis, a good product.”